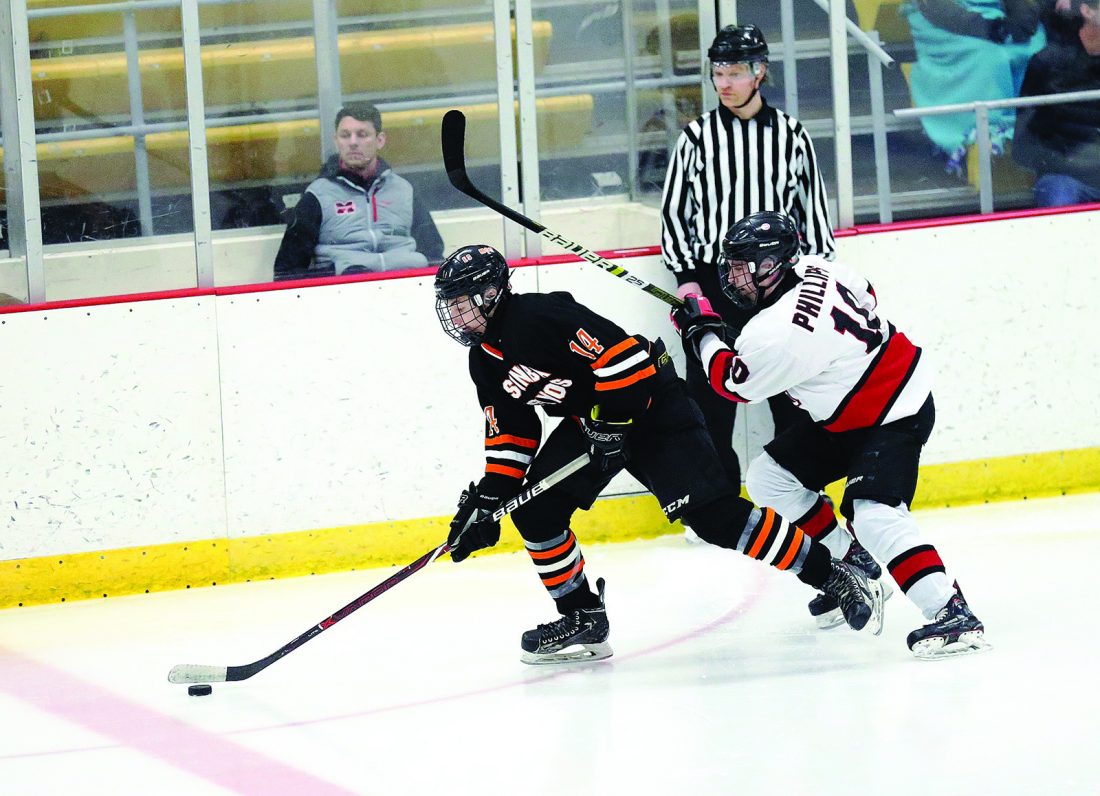 Win No. 101 proved to be even sweeter, as the Redmen prevailed 5-0 over Escanaba in the MHSAA Division 2 regional tournament championship game at Lakeview Arena on Thursday night.

With the win, MSHS improved to 20-5-2 and will cross the Mackinac Bridge to face the winner of tonight’s game between Muskegon Mona Shores (6-18-2) and Petoskey (17-8-1) in the state quarterfinals at 7 p.m. Tuesday at the Ostego County Sportsplex in Gaylord.

It’s Marquette’s first trip to the quarterfinal round since the 2016 season, when the Redmen fell to Forest Hills Northern-Eastern 2-1 in triple overtime.

Thursday night’s performance versus the Eskymos (12-14) came thanks in part to two first-period goals from junior forward Ryan Baldwin. Baldwin netted the first just 2:50 into the game off of an Esky turnover to MSHS senior forward Tanner Phillips.

Phillips picked up the puck and passed it to Baldwin, who had a wide-open net for the goal.

Baldwin later scored again on the power play at the 12:47 mark with an assist from senior forward Nick Leafers.

“It feels amazing, it feels really good,” Baldwin said about his contributions to the regional title.

He wants to keep the train rolling as long as possible, though, as Baldwin and his teammates prepare to head downstate.

“We’ve just got to get pucks deep, push to the net and keep it simple. We need to play our game.”

Garrow said a chippy, penalty-filled first period helped the Redmen get on the board following a pair of five-minute major calls on the Eskymos.

“Once we got our third goal, I think that put us in a pretty good spot knowing that we just had to manage the game and do the little things right to win a hockey game. I thought we did a pretty good job from that point on.”

Fifty-one seconds later, MSHS sophomore forward Ansel Frost was sent off on an interference call. Then 21 seconds after that, Esky received another five minutes for checking from behind.

That gave Marquette a 4-on-3 and eventually a 5-on-3 power play that carried over into the second period.

“I thought we finished the game strong,” he said. “The kids battled hard but obviously we ran into some penalty trouble in the first period. That definitely hurt us. You can’t play against Marquette when you’re sitting in the penalty box.”

Hughes added that he’s proud of the season his team battled through.

“We were kind of up and down throughout the season. We had a lot of one- or two-goal games that I wish we could’ve had or we battled back in. We played well against a couple of ranked teams in the Top 10, so I’m pleased with that and I would’ve liked a little better finish, but it just wasn’t that way (tonight).”

Marquette’s third goal and second on a power play came from junior defenseman Andrew Fedrizzi with 25 seconds left in the first during the 5-on-3 advantage. Senior defenseman Thomas Dunleavy and Baldwin assisted.

Dunleavy added an assist in the second period on a shorthanded goal from senior forward Sean O’Connor, who beat Esky junior goaltender Trevor Denome’s blocker side to make it 4-0. Shots were 31-9 after two.

Sophomore forward Dylan Baldwin added a goal with 1:58 left on an assist from junior forward Hogan Nemetz. Final shots were 42-20 with MSHS senior netminder Tyler Bergwall earning his second consecutive shutout and 11th of the season.

“Tyler’s been great all year,” Garrow said. “He’s one of those goalies who’s a battler and competes hard. He hates to get beat whether it’s in practice or a game. Two shutouts in a row, so he’s really playing well and we’ll ride him the whole playoff. How Tyler does is how we’re going to do as a team.”

Garrow brushed off the fact that coaching win No. 101 came with a trophy, stating that his team has its eyes on the bigger picture.

“It’s nice to win a regional championship and give these guys a little feather in their cap knowing that all their hard work has paid off,” he said. “But it’s not over. Yeah, we won a trophy, but they want the big prize and we’ve got a long way to go.

“We’ve got three more games left potentially and they get harder from here. We have to play better every game and if we want to move on we’ll just have to keep playing better.”

Power-play opportunities: Escanaba 0 of 1, Marquette 2 of 3