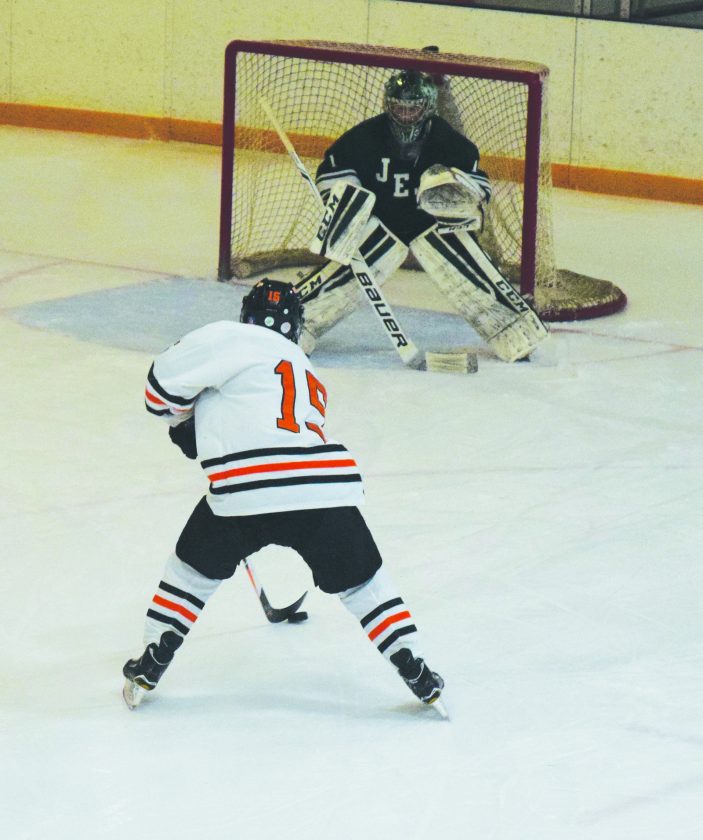 WELLS — The Escanaba hockey team played well in stretches, but it wasn’t enough to overcome the energy Painesdale Jeffers brought here Saturday. The Jets scored early and added timely goals throughout to spoil Senior Day for the Eskymos with a 5-3 win.

Jonathon Mantila gave the Jets a 5-3 lead with a shot from the doorstep 6:28 into the third period. It was the lone goal of the final frame, and it provided Jeffers with a little more of a cushion Esky couldn’t overcome.

“It wasn’t our best effort,” Esky coach Matt Hughes said. “We came in short one defenseman and then Chris Sliva got hurt so we were only running four deep defensively and kind of ran out of gas.”

The Eskymos (11-13) got on the board first with a goal by Joseph Jacobson on a nice assist from Jacob LaFave 3:01 into the game.

But as they would do all game, the Jets (10-10) answered quickly. Senior defenseman Evan Larson fired a slapshot from just past the center line into the goal to tie it 1-1 at the 6:34 mark. Matthew Halonen scored from right in front of the net with 2:05 remaining in the first frame to give the Jets a 2-1 lead heading to the second period.

“We knew we had to win,” Jets’ coach Pat Nettell said. “It wasn’t the prettiest win by any means, but we kept it up for three periods. We knew they had a young goaltender and we had to keep the pressure up. We haven’t won here in a very long time so this gives the kids some confidence heading into regionals.”

Esky came out with more energy in the second period, being the aggressor and getting more shots on goal. Kyle Krutina tied the game 9:20 into the frame with a goal from the low slot.

But 17 ticks later, Larson answered with his second goal of the game to make it 3-2.

“He’s a senior captain who knows what it takes,” Nettell said. “Our first line scored all our goals. They have been carrying us all year.”

Esky put some pressure on Jets’ goaltender Evan Pietila later in the period and Grant Wickham took advantage. Wickham fired in a loose puck sitting in front of the net off a rebound while being tripped by a Jets’ defender to tie it at 3 at the 11:05 mark.

“The first and third goals we scored were really textbook,” Hughes said. “You put some pressure on them and then you’re able to score on the rebound, so that’s a really positive thing. Unfortunately, we weren’t able to do that consistently.”

Halonen scored his second goal on a breakaway just over a minute later to give the Jets the lead back at 4-3 and the Eskymos never scored again.

The Eskymos honored their five seniors before the game, and Hughes spoke about how much they meant to the program.

“They’re all good kids on and off the ice,” Hughes said. “They work hard and they all contribute in different ways. We tried to give them more ice time today with some guys being out and that’s what Senior Day is all about.”

Freshman goaltender Bryce Buchbinder made 34 saves for Esky, while Pietila made 29 saves for the Jets. The Jets outshot Esky 39-32.

Both teams struggled on the power play, as the Jets went 0-for-3 and the Eskymos went 0-for-1.

Esky visits Negaunee in its regional opener Tuesday, while Jeffers takes on Houghton at Michigan Tech in its playoff opener Tuesday.