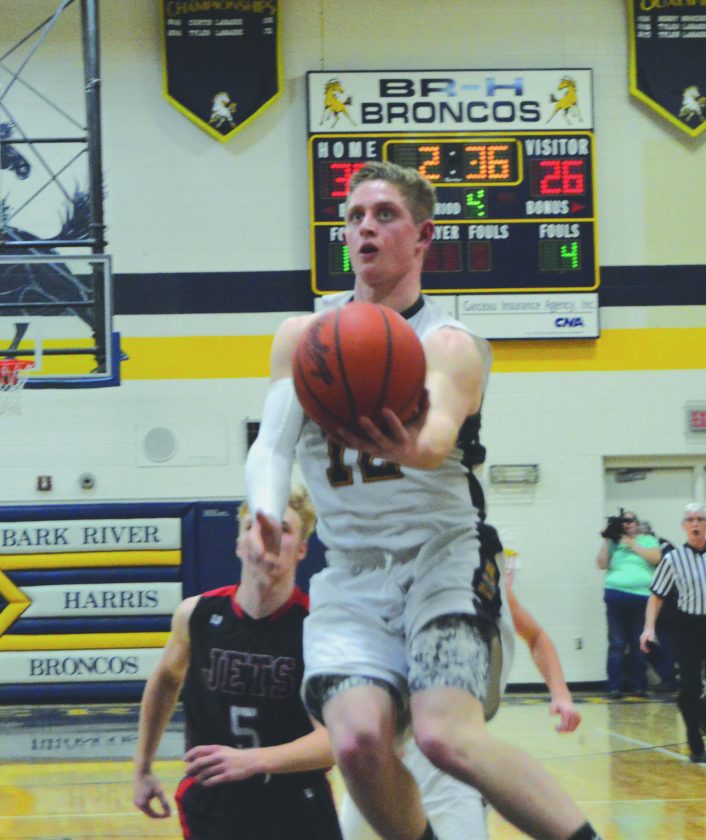 HARRIS — In a nail-biting conclusion, the Bark River-Harris boys’ basketball team pulled out a 34-32 win over the North Central Jets Friday.

This Skyline Central Conference game was decided in the final two minutes. Broc Stenberg of Bark River scored with 2:35 left in the final quarter to increase its lead 32-26.

A 6-0 scoring run from the Jets tied it at 32 with a minute left. Neither team could capitalize until the Broncos’ Riley Bray hit a layup with just 15 seconds left to seal the win.

“It’s always tough to play here,” Jets’ coach Mike Malone said. “They have such a dedicated and loud fan section that it’s difficult to give directions to the guys on the court.”

The first quarter was a defensive battle. Bark River led 12-7 at the end of the period.

In the second quarter, the Broncos (8-12, 6-11 SC) struggled against a renewed defensive push. North Central cut its deficit to trail just 17-16 at the end of the half.

“The biggest thing was a tough defensive battle on both sides of the ball,” Broncos’ coach Mark Zawacki said.

Bark River pushed its lead up in the first two minutes of the third quarter, leading 22-16 with 5:53 left. One triple from North Central’s Griffin Johnson and two other baskets were its only points for the quarter.

The Broncos maintained their offense and led 26-23 at the end of the period.

20 seconds later, Brady Eichmeier of North Central hit a jumper to trim its deficit to 32-28. Johnson made a layup 30 seconds later to cut it to 32-30.

At 1:13 on the clock, the Jets’ Noah Gorzinski scored to tie the game at 32. The ball continuously traded hands until Bray put it through the net with just 15 seconds left.

“We fought to the end,” Malone said. “That’s really all I can ask for from my guys.”

It was also Senior Night at Bark River, where the seniors on the team were honored before the game.

“It was nice to be able to play their (the seniors) last regular game at home,” Zawacki said. “It was a total team effort top to bottom — it was really a defensive battle.

The Broncos’ leading scorer was Stenberg with eight points.

North Central will face Carney-Nadeau at home in its district opener Monday.