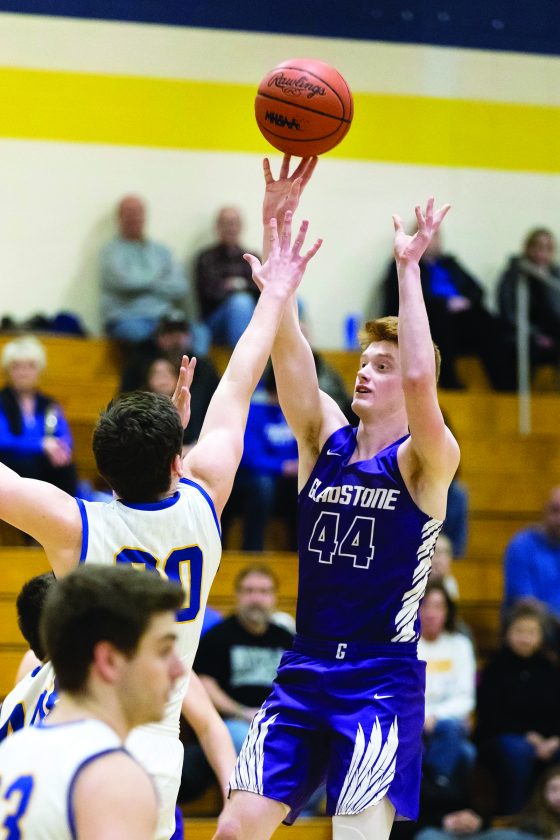 It was Gladstone’s third straight win in a final week of tuning before the district tournament next week.

“It’s one thing to get to a thousand. It’s another thing to break the all-time leading scoring record,” Beauchamp said. “Focus on the game was just win, just to beat Gladstone.”

Terrian entered Thursday’s game needing 25 points for his milestone. He set his mark first by receiving a pass down low, backing down a defender before spinning to the right block and laying it in with 2:58 left in the third. Terrian said he didn’t realize he achieved the milestone until after he went back on defense.

“I didn’t really know exactly where I was at,” Terrian said post-game in the locker room. “I was just playing.”

Beauchamp, sitting beside him smiling, said “I knew.”

“Yeah, he let me know,” Terrian said. “I didn’t know that’s what it was until he put his hands up and celebrated.”

Play was briefly stopped and the announcement to the crowd was met with applause.

Three minutes of game time later, with 7:51 in the fourth, Beauchamp was fouled going to the rim and hit both free throws to surpass Short’s mark. The free throws also made it a one-point game. The play was blown dead for another announcement and resumed. A timeout soon after gave Kingsford head coach Dan Olkkonen a chance to congratulate Beauchamp.

The collective 53 points between the duo wasn’t enough to overcome Gladstone, whose speed and transition game was too much to overcome.

“We’ve been trying to notch up wins and get a little roll going into the tournament here,” Gladstone coach Dane Quigley said.

“That was a tough fought game. Kingsford’s got two excellent players in Terrian and Beauchamp. We knew coming up here it wasn’t going to be a walk in the park and we’d have to grind it out.”

The Braves (12-7) opened a 12-point lead in the third quarter, but the Flivvers battled back to make it a three-point game.

“I was proud of that because I realize we got outmatched a little bit in the first half just with individual man-to-man,” Olkkonen said of Gladstone.

“We switched it to zone, caught a few breaks and all of a sudden had momentum. I think we took the lead at one point in the third quarter. Tied it up in the third and fourth. That’s the leadership, poise and confidence that (Beauchamp and Terrian) bring to the team. We were very disappointed in the loss because of the effort that we gave. It’s been five games in eight days. It’s been tough.”