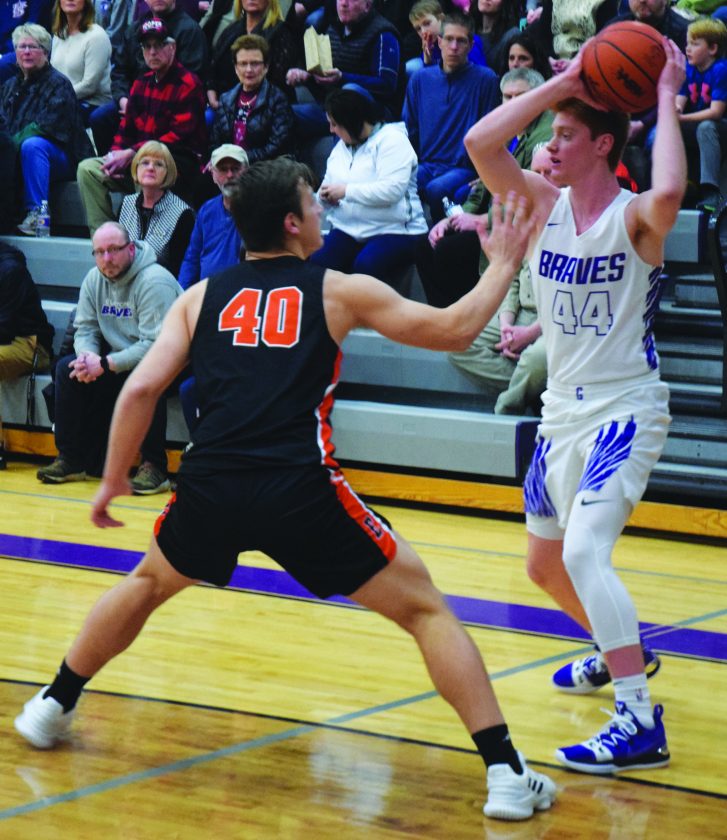 Austin Hemmingson | Daily Press Gladstone’s Reece Castor (44) squares up with the ball while being defended by Escanaba’s Jared Nash (40) Friday at Gladstone. The Braves beat Esky 66-62 in each team’s regular season finale.

GLADSTONE — Taking care of the basketball paid off for the fourth-ranked Gladstone boys Friday night in a hard-fought 66-62 victory over the Escanaba Eskymos.

The Braves finished with 10 turnovers, including four in the second half. Esky committed 10 of its 18 after the intermission in the regular-season finale.

“Our goal is to keep our turnovers to 10 or fewer and we normally do a good job taking care of the ball,” said Braves’ coach Dane Quigley. “We collapsed on them in the fourth quarter, and I thought we did a good job forcing them into poor decisions.”

The Braves secured the decision in this Great Northern Conference match-up on a pair of free throws by senior guard Reece Castor with 12.4 seconds left to play.

“In the fourth quarter we noticed they were getting up the court a little slower than in the other quarters,” said Castor. “We knew they were tired and we wanted to pressure them a little more and get on the break. In the end, it was just a matter of getting back on defense and keeping our hands straight up. We didn’t want to put them at the line. These games are always close. I think this is a big momentum builder for us. Winning three games this week gives us a little confidence going into the (Division 2) district.”

Esky climbed within 64-62 on a putback by senior center Austin Williette with 72 seconds remaining. The Eskymos, however, missed some shots at crunch time.

“We just didn’t finish the game,” said Esky coach Tracy Hudson. “Our guards did a great job handling the ball, but our big guys had a lot of unforced turnovers. Our bigs have to make decisions a little quicker. We have to get our turnovers down to about 10 and need to shoot the threes better. We were 50 percent inside the arc, but were 5-of-19 from outside. I thought we played good defense for 25 minutes, then we had 3-4 minutes where we had some guys lose concentration. It seemed like their intensity picked up and we got a little lackadaisical.”

The Eskymos gained a 54-47 lead on a layup by senior forward Jared Nash late in the third stanza.

Castor finished with 22 points. Senior guard Carson Shea, who sank 9-of-14 field goals, added 18 points and Rudy Peterson drained three trifectas for nine in only his second game back after getting injured in football last fall.

“Rudy brings an attribute to our game where we really needed it,” said Quigley. “He gets his shots off real quick and will take a few steps back. You can’t leave him open. Guys have to come out and guard him. Reece did heck of a job underneath and Carson is shooting a real good percentage right now.”

Nash collected 26 points and 17 rebounds and Willette had 10 points for the Eskymos.

“I thought Jared really brought it tonight,” said Hudson. “He played a great ball game. He played the way we wanted him to. Austin also had a great inside game and (Craig) Kamin had an excellent floor game. There’s no shame in losing to Gladstone. They’re a top five team.”

The Eskymos controlled the boards in this contest, finishing with a 38-29 rebounding advantage.

“That was brutal,” said Quigley. “This was an extremely physical game. They’re big, strong and physical. It’s tough to match up with them. We knew their plan was to move into the post. Their strength is their size and ours is our speed. We’ve been able to make teams run with us, especially in the fourth quarter.

“We talked about not taking the pressure off on offense. I thought their 1-3-1 (zone) rattled us a little early in the game. Lots of our guys weren’t getting into the gaps.”