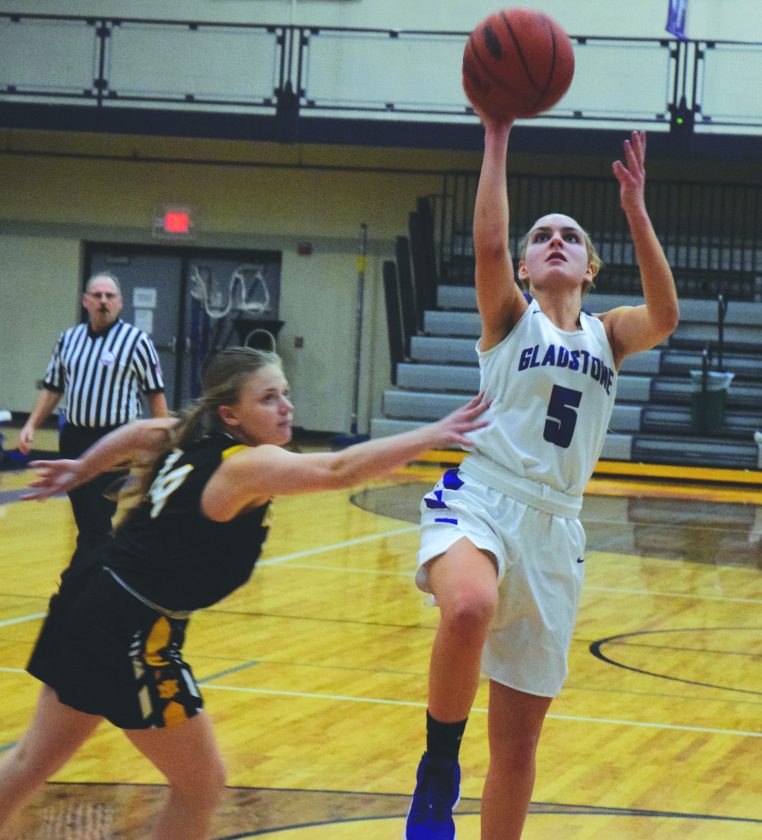 GLADSTONE — It’s no secret that 6-foot-3 center Megan Crow is the catalyst for the Gladstone girls’ basketball team. But as the Braves have improved, so has the rest of the squad.

Wednesday night it was junior guard Maddie Ahlgren stepping up with a season-high 18 points to lead all scorers in a 50-35 win here over Iron Mountain in a Mid-Peninsula Conference game.

Ahlgren hit timely shots and finished 5-of-5 at the free throw line to lead the Braves to the win.

“Maddie had one of her best games of the season,” Braves’ coach Andy Cretens said. “I got on her for needing to shoot free throws better and she went 5-for-5 so that was great to see.”

After Alaina Trudeau scored the game’s first point for the Braves on a free throw, the Mountaineers went on an 8-0 run to take a seven-point lead with 2:42 left in the first quarter.

“We had a conversation about getting ourselves hyped up to play for every game,” Cretens said. “We have to be careful with not getting complacent. It was a good win, but a dirty win because we didn’t execute the way we wanted to. We gave them confidence, but give Iron Mountain credit. They came ready to play.”

The Braves responded from a slow start with a 12-4 run, capped by a layup from Ahlgren to retake the lead at 13-12 with 6:36 left in the first half.

They continued their strong play the rest of the half and into the third quarter, particularly on the defensive end. They held the Moutaineers (7-13, 4-8 M-PC) to just seven points in the second period and five in the third to take a 34-24 lead into the fourth.

“For us, the biggest key was our defense,” Cretens said. “That’s what we hang our hat on. We did a good job battling back and held them to seven and five points in the second and third quarter.”

“Sometimes 13 points isn’t good enough for a quarter and that’s what we had in the second and third quarter combined,” Grenier said. “It hurts to not have our top scorer (Riley Poupore is out for the season with a torn ACL), but give Gladstone credit. They worked the ball around well and Ahlgren does a good job finishing.”

The Mountaineers made things interesting for a bit in the fourth quarter, trimming their deficit to 37-33 on a layup by Saylor Swartout with 3:16 remaining. But Ahlgren responded with a bucket for the Braves on their next possession, and they were able to ice the game by going 10-12 at the charity stripe during the final frame.

“Free throw shooting was huge for us,” Cretens said. “We’ve really improved on that a lot throughout the year.”

Junior guard Taelor Zeise made her first appearance for the Braves, finishing with three points. She broke a finger on her shooting hand and was out for seven months.

“Getting Taelor back helped,” Cretens said. “She kind of sparked us tonight. She was a premiere player for us last year because she rebounds and defends well. We need to get her back in game shape but she’ll be an asset for us heading into districts.”

Crow chipped in with 16 points for the Braves as the tandem of her and Ahlgren combined for 34 of the Braves’ 50 points.

Reagan Lundholm came off the bench to lead the Mountaineers with 14 points. Swartout chipped in with 10 points, four rebounds, three assists and three steals.