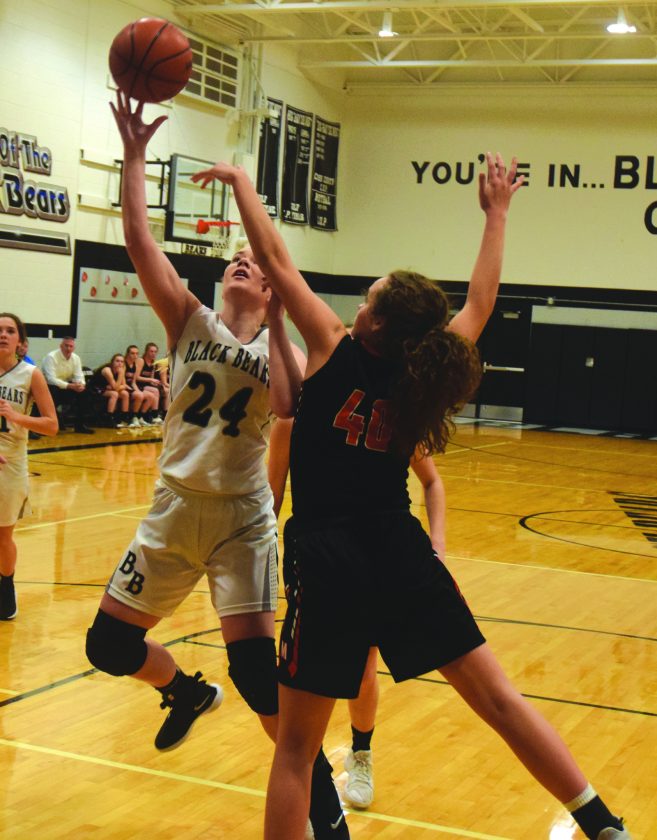 The Black Bears (1-7, 0-7 SC) pulled within two on multiple occasions before the Mustangs pulled away in the fourth quarter of the Skyline Central Conference contest.

“I think our inexperience is the biggest reason for our slow starts,” Black Bears’ coach Jenna Bradshaw said. “I started an eighth and a ninth grader again tonight. These girls are young. It usually takes them about a quarter and a half to settle down and realize they can play against these girls before they get confident.”

The Mustangs led 14-2 with 4:31 left in the first quarter after a three-pointer by Daryn Johnson. Munising’s press was too much for the Black Bears early, as they threw the ball away multiple times, resulting in layups for the Mustangs (7-4, 4-3 SC).

“Turnovers were issues again,” Bradshaw said. “I think that’s part of being a young team.”

After trailing by a dozen, the Black Bears closed the half on a 17-5 run and held the Mustangs to two points in the second quarter to head into halftime down by just three.

“Two points in a quarter is horrible,” Mustangs’ coach Matt Mattson said. “We had a lot of unforced turnovers. I thought we played pretty good for the first four minutes and did some good things the last four minutes of the game, but in between we did not play well. Holli Stapleton and Meagan Yonker fought hard and gave us a hard time. Big Bay outplayed us a lot of the game.”

The Black Bears closed the gap to two on a layup by Yonker 30 seconds into the second half. They got within two many more times in the quarter, but never any closer.

“I thought it was a good game,” Bradshaw said. “It was our first game in a couple of weeks due to cancellations and a couple forfeits. We heard about what this team was going to bring.

“Meagan Yonker stepped up and really led the team. We knew they were going to double-team Holli so I thought Meagan did a really nice job. This was a winnable game, we just have to be able to finish. I’m proud of my girls.”

Johnson made a layup in transition to push the Mustang’s lead to 34-28 with three ticks left in the third period and they were able to pull away in the fourth. A jumper by Kaila Cotey put them up 41-28 with 5:47 left in the game to complete a 15-4 run.

“We went to the post more when Stapleton got in foul trouble,” Mattson said. “We were also a different team without (Michaela) Werner in the first half because of foul trouble.”

Werner led the Mustangs with 17 points. Johnson chipped in with 13 and Taylor Downs had 11.

Yonker led the Black Bears with a season-high 14 points.