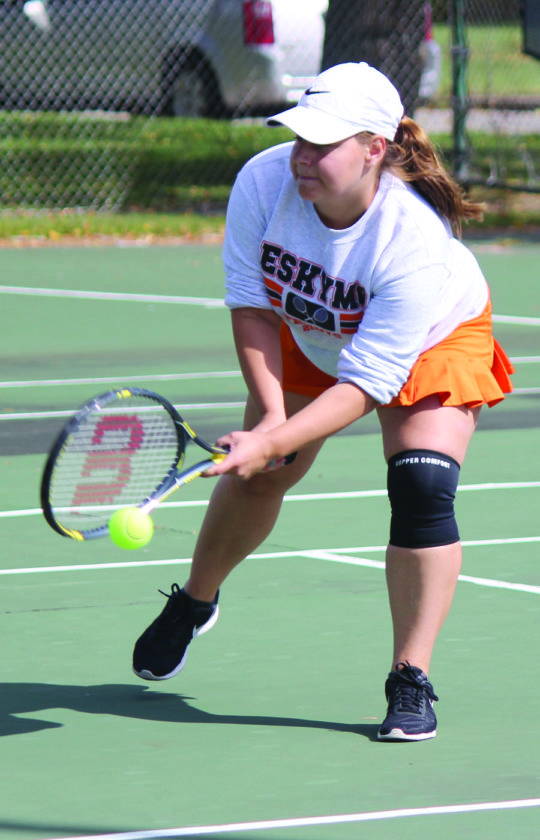 Dennis Grall | Daily Press Jess Koish of Escanaba reaches for the ball during her doubles match against West Iron County Wednesday at the Great Northern Conference tournament at Ludington Park.

GLADSTONE — The Marquette Redettes had to wait things out for a bit, but they made it worth their while Wednesday by edging the Menominee Maroons 22-20 for their second straight Great Northern Conference tennis title

West Iron County placed third with 15 points and Gladstone took fourth at nine on this sunny, cool and windy day.

“The key for us is everybody won her first and last match of the day,” said Marquette coach Derek Sandstrom. “This tells us we’re capable of doing good things. It also shows where we’ve improved and where we need a little work. Our No. 3 and 4 singles (sophomore Haddie Ketzenberger and senior Natalie Robinia) moved up and took third, which was huge.”

“We communicated with each other and stayed positive,” said Talbacka, who won at No. 3 doubles as a sophomore two years ago. “This was my last chance to win the GNC. Winning this is icing on the cake and I’m proud of our teammates for everything they did.”

No. 1 singles was a friendly, but intense match in which Marquette junior Elysa Olivier beat West Iron senior Katarina Serbentas 6-2, 6-1.

Serbentas temporarily gained momentum in the first set on a double-fault by Olivier, helping her pull within 5-2. Olvier, however, recovered quickly.

“Playing Katarina is a little difficult because she’s my best friend, but during the match I have to block it out and play her like I would against any other opponent,” said Olivier.

“She’s very fast and hits some amazing shots. We play doubles together and have a lot of fun in summer tournaments. This is supposed to be fun. I try to relax and not get stressed out.”

“Unfortunately, four of our flights didn’t make it out of the first round. Our No. 2 doubles played a real good match and lost in three sets.”

Sophomore Jacey Moreau, Escanaba’s lone representative in the finals, dropped a 6-3, 6-0 decision to Menominee’s Ely Wellner in No. 2 singles.