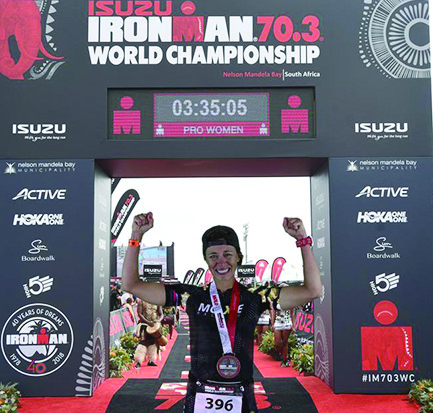 ESCANABA — Not everybody gets a chance to participate in a world championship event.

Lori Aho of Gladstone, however, earned the opportunity to compete in the Half-Ironman 70.3 World Championship Triathlon near Port Elizabeth, South Africa Sept. 1.

“There were 4,500 athletes and 102 countries represented,” she said. “It was amazing and so humbling to see all the different people, their countries’ flags and to be in the Parade of Nations (Aug. 30). The United States had the largest representation by far with 769 athletes racing.”

Aho qualified in a half-ironman event in Galveston, Tex. in April, placing seventh in her division at 5:36.

“I trained all winter and had a real good race down there,” she said. “I missed the podium by two positions, but during the slot allocation/roll down ceremony I managed to get the last championship spot (of two available) in my age group. It was very exciting to hear my name get called.”

Aho said the water temperature in the Indian Ocean at Nelson Mandela Bay was 63 degrees on race day.

“When you ran off the beach and put your face in the water, it took your breath away,” she said. “We had to get through some big waves crashing into the shore, then once out in the ocean there were some very large swells.

Before the start they were playing music and all the women were dancing, giving each other high fives, wishing each other well and hugging each other. The camaraderie was awesome. It was so much fun.”

“There was a six-hour time difference and we started at 3 a.m. our time,” she said. “The bike is my strongest leg and I was in the top third of my age group going into the run. We had a gradual uphill for the first nine miles. Then, later in the course there were several steeper 200-300 foot climbs.”

Aho said temperatures hovered in the low 70s during the run.

“It was spring down there and the weather was a little different,” she said. “The run was hard with the high humidity. It felt so much hotter than that. It was a two-lap course around the city (Port Elizabeth) with people lining the streets and cheering. We had some hills. There was nearly 400 feet of climbing total through the run.

“Texas and South Africa are not really comparable courses. There was a lot of elevation on the bike course at the World Championship. That was by far the hardest course I’ve done. I didn’t really expect to get a PR (personal record). It was more about taking in the whole experience, enjoying it and learning as much as I could

“At the finish, I broke down in tears. It was a dream come true.”

The next day (Sept. 2), Aho and her boyfriend Steve Ouwinga of Gladstone, had an opportunity to watch the Pro men’s race.

“The men’s race was amazing to watch, they are so fast and fluid with everything they do,” she said. “Also, it was so special being there with Steve. He took care of everything. He checked over my bike, carried all my things and totally took care of me. I couldn’t have done it without him.”

“I went to the pool at the (Northern Lights) YMCA and did a few outdoor swims at the Gladstone beach and Escanaba. I have a coach from Arizona (Jason Lentzke), who has a USAT coaching certification and is also a certified coach with Ironman. He has more than 10 years experience.

“Jason is a close family friend and he sets up weekly training schedules for me. He coaches my son (Mike), too. We’re so grateful to have his help.”

She has done six 70.3 ironman triathlon races, including the World Championship in South Africa. She also did one Olympic distance and three sprint distance triathlons, one 70.3 aqua bike (swim/bike) and one 70.3 relay (bike portion) beside the attempt at the full ironman in North Carolina.

Aho and Ouwinga flew to Cape Town, South Africa Aug. 27 and arrived in Port Elizabeth the next day.

One of the highlights took place on Labor Day (Sept. 3) when they went on a three-day safari. They left South Africa Sept. 6 and got home two days later.

“The safari and the whole trip were amazing,” said Aho. “It was a trip of a lifetime.”