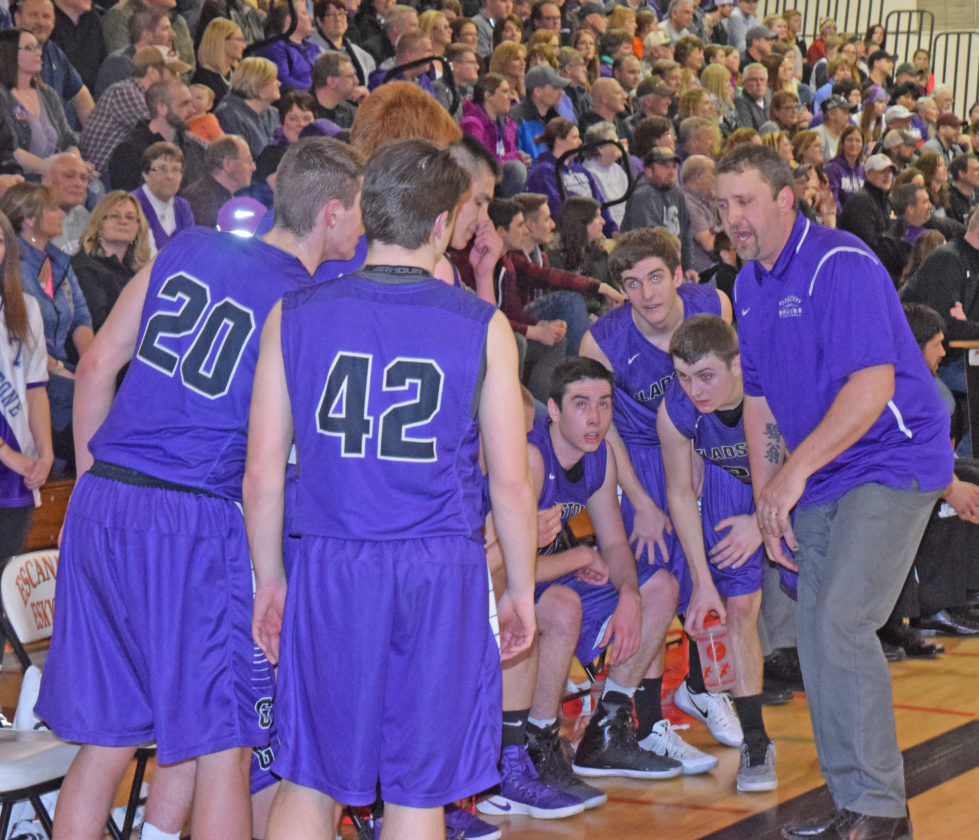 Mike Mattson | Daily Press Gladstone coach Clayton Castor fires up the Braves during a timeout in the March district championship game at Escanaba. Castor has resigned from his duties after two years as varsity coach.

GLADSTONE – Clayton Castor, the 2017 U.P. Class ABC Coach of the Year in boys’ basketball, has resigned as head coach at Gladstone High School.

Athletic Director Andy Jacques confirmed Castor’s resignation Friday and said the search for a replacement will get started.

Castor led Gladstone to an 18-6 record this season and a spot in the Class B regional championship game.

He cited family considerations, difficulties launching the summer program, issues with the booster club and mainly parents as his reasons for stepping down.

“I have a lot of different reasons why I wanted to resign and only a few reasons to stick around,” Castor said.

“I thought our administration at Gladstone was really supportive of our program and they did a great job. But I thought there were some things early on in the year, small situations that were mind blowing … I dealt with our fan club. I ended up having a meeting with them. I thought the meeting was out of line.”

“Those suspensions took the wind out of my sails, but we gathered ourselves back and fought really hard,” Castor said.

Like many prep coaches today, Castor had to deal with a small faction of parents who were not supportive of him and the program for various reasons.

“At the end of the day, the reason why I am resigning is because of parents,” Castor said. “I don’t want to deal with them. The last five years I have coached at Gladstone I have given it my life. My time could have been better spent doing other things.

“I really, really enjoy this. But parents have taken the fun and enjoyment right out of it. Maybe some of this is on me. I just don’t have thick enough skin or the will to put up with it. For that amount of time, it’s just not worth it.”

Jacques said the head coach position will be posted in the school district internally and externally. He would like to hire a replacement before the school year ends so summer camps and workouts can be handled.

Jacques said Castor’s decision to resign was not a total surprise.

“I had an inkling this was going to happen,” Jacques said. “He’s been talking to me quite a bit about different situations. It’s hard to let a really good coach go, but it’s best for him and it’s best for his family to do this.

Castor compiled a two-year record of 29-15. His teams were 7-9 in the Great Northern Conference over that span

But the Braves played their basketball at the end of this season. In the district, they beat bayshore rival Escanaba and Menominee, which won both regular-season meetings.

“The first 20 games weren’t much fun, but when we zeroed in on the playoffs it was a blast,” Castor said. “I’m very proud of the season we were able to put together.

“The one thing I’m proud of the last couple years is we have really brought Gladstone basketball back,” he added. “I’m confident I left the program in a lot better shape than when I got it.”