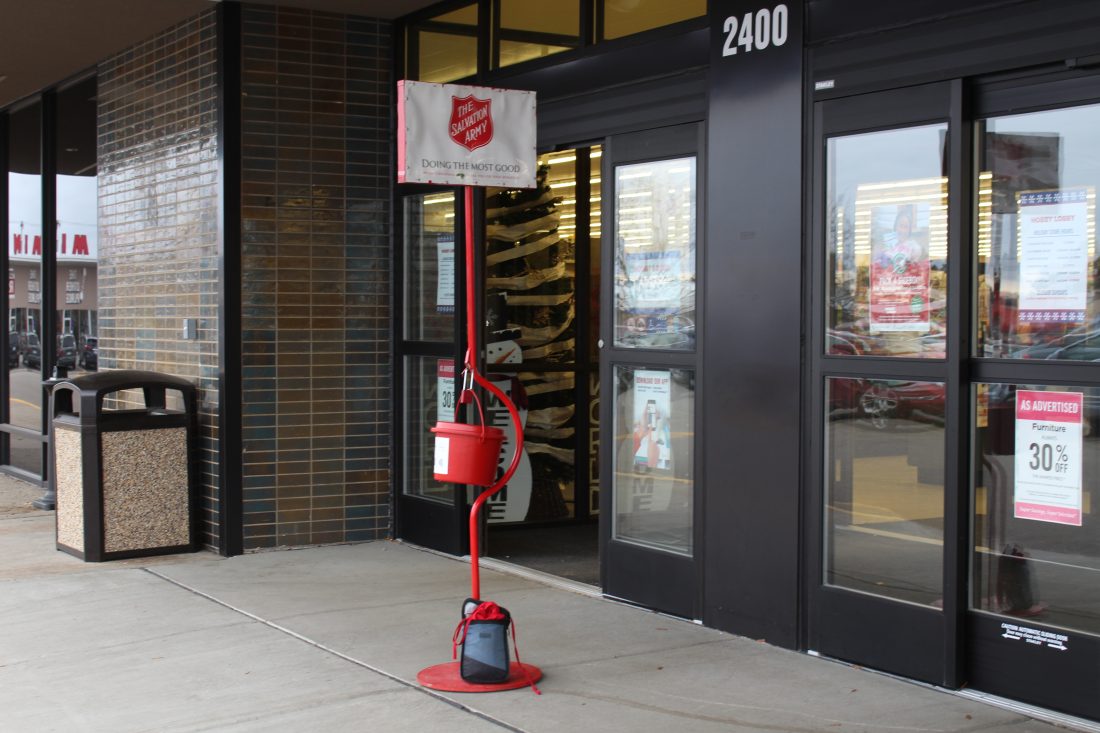 Clarissa Kell | Daily Press An unattended Salvation Army red kettle outside the entrance to Hobby Lobby in Escanaba Tuesday. The annual fundraising campaign started locally on Nov. 13 and will conclude on Dec. 24.

ESCANABA — The Salvation Army’s Red Kettle Campaign for the 2019 holiday season is underway.

The Red Kettle Campaign is a national campaign that each corp participates in to fund their local community initiatives.

Major Alex Norton, of the Escanaba Salvation Army, said the campaign started on Nov. 13 and will conclude Dec. 24.

“It’s been the same campaign we’ve done for about a 100 years now,” Norton said.

He explained the campaign concludes with a Christmas Eve service at the Salvation Army church at 8 p.m.

According to Norton, Elmer’s County Market, Hobby Lobby, Culver’s and Gladstone IGA had bell ringers since Nov. 13, but Walgreens and Walmart didn’t have a red kettle stationed until after Thanksgiving.

Bell ringers are greeting locals out and about during the holiday season from 10 a.m. to 6 p.m. every day, Norton said.

He added there are some volunteer groups that stay out a little later if they feel like it, but most of the time the red kettles are secured away for the night by 6 p.m.

“Most of the stores usually start winding down around the six o’clock hour, so that’s why we don’t usually stay out there longer than that,” Norton said.

This year, the local Red Kettle Campaign fundraising goal is $80,000.

“That really only covers a third of our entire budget for the year,” Norton said, adding the Salvation Army’s fiscal budget year is from October to October.

“We try to reduce that as much as possible,” Norton said of the amount used for Salvation Army operations.

The Christmas campaign, in addition to yearly mailing campaigns, is a key source of income to provide assistance and programs to the community for the upcoming year.

According to Norton, this year the Escanaba Salvation Army provided 73 tons of food to local residents. The Salvation Army also serves 7 percent of Delta and Schoolcraft counties populations every month, with a majority coming from Delta County.

“Which increases in the holiday season,” Norton added.

In addition to the the mailing and traditional red kettles, Norton said this year the Red Kettle Campaign has two new modernized features.

Norton said he is excited to announce this year there are barcodes on the red kettles for people to use their smart-phones and donate through Apple Pay and Google Pay.

The Escanaba Salvation Army offers a “text to give” option, where people can text “24365” to “Escanaba” to donate.

According to Norton, the digital payment options are the local Salvation Army trying to meet the next generation of donators.

For more information on the new ways to donate, visit the local Salvation Army’s Facebook page by searching for “The Salvation Army Escanaba.”

ESCANABA — Hot on the heels of Tuesday’s announcement that the U.P. State Fair has been canceled for 2020, ...

ESCANABA — Tomorrow is Independence Day, and — despite the impact of COVID-19 — many special events are being ...

No paper on 4th of July

ESCANABA — The Daily Press will not be published Saturday, July 4, to allow employees to celebrate the Fourth of ...

MANISTIQUE — Two Manistique residents were arrested and arraigned on drug-related charges after an apparent meth ...

Board has authority on guns at Mich. Capitol

LANSING (AP) — A board overseeing Michigan’s Capitol determined it has the legal authority to decide whether ...