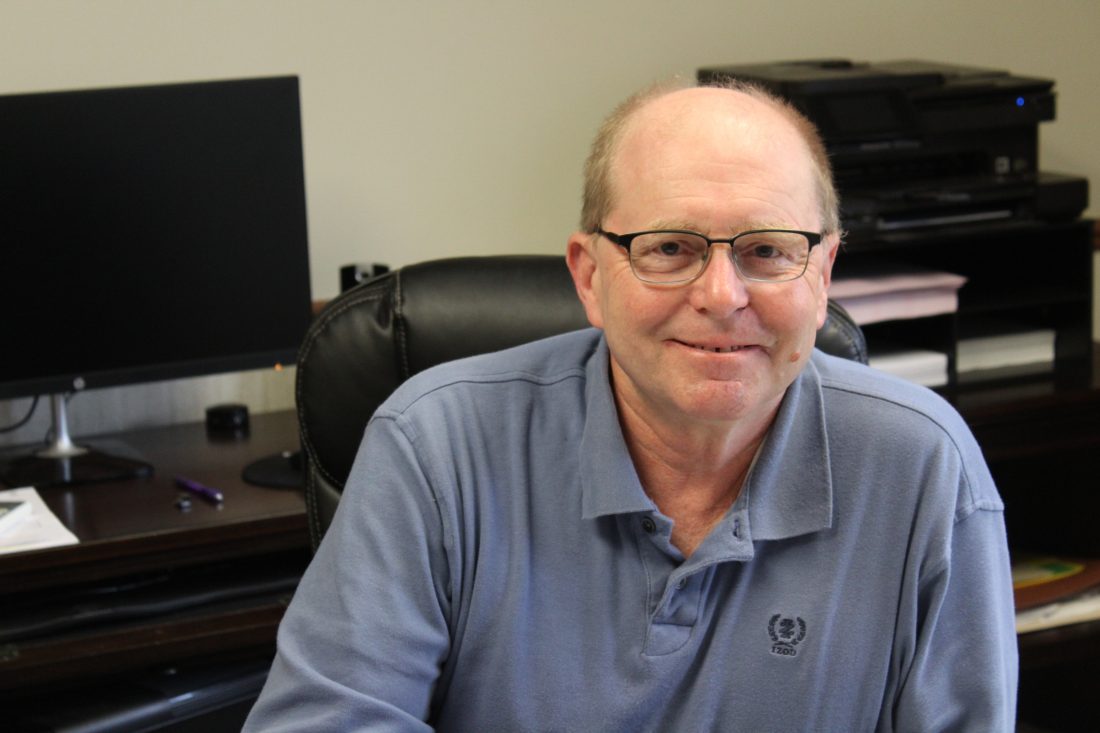 Clarissa Kell | Daily Press Interim City Manager Eric Buckman sits behind his desk in his office at Gladstone City Hall Thursday. Buckman, who has been the interim city manager for Gladstone once before, has inherited many projects since taking over in early August.

Buckman retired from the city of Gladstone in 2018, having worked at the water and wastewater department for 32 years — 26 as superintendent of the department.

“I had both titles, but luckily I had good staff and the people that were planning to take over for me were at the plant,” he said.

Buckman was interim city manager for a little over a year as the city commission looked for a new city manager.

During that time, Buckman said it was a learning experience as he had to learn the whole budget.

“I know the water and wastewater utilities really well, which … the utility budgets are the most complicated of the (budgets) so the general fund was a snap for learning,” he said.

In 2016, there were things going on in the city that Buckman had to jump into when he took over.

“There were three union contracts we had to iron out, balance out the budget, plus we had a different commission and then we had the things that were going on with O’Connor,” he said.

Although Buckman is a seasoned veteran to the duties of being interim city manager, the job this time around still comes with its own challenges.

Those challenges are the multitude of projects the city was gearing up for and were at a standstill at until Buckman got the ball rolling again — one of which was the big infrastructure project known as the 9th Street Project.

“So that’s what my main goal was, to make sure we get that project rolling right off the bat because it seemed to be at a stall,” he said.

The 9th Street Project includes a total reconstruction of 9th Street — including work on storm drains, water lines and sewer lines from Minneapolis Avenue to 4th Avenue — as well as work on other streets, avenues and alleys. The work on 9th Street will also include work on some of the sidewalks and the addition of a bike lane.

The $4.8 million project was supposed to begin this summer, but was delayed. The special assessment resolution for the project was just recently approved by the city commission.

Buckman said currently Robert W. Baird Co. is looking for local bonding investors. Robert W. Baird Co. is an American multi-national independent investment bank and financial services company based out of Milwaukee that the city is going through to get a 15-year capital improvement bond to pay for the project.

When it comes to the other projects and issues inherited, Buckman has been working on filling full-time supervisor positions for the Public Works and Electric Department, the utility rates study and the Turner Report, purchasing a front-end loader and grader for the Public Works Department, an agreement with the Housing Commission in regards to the senior housing project, the details of the SAW grant, the North Shore Development project, the substation upgrade project for the electric department, PA 202 plan changes for retirees, and of course the K-9 the Gladstone Public Safety Department will be getting soon.

Buckman laughed as he said the city has just “a little bit going on.”

He noted the backbone of the operation is the phenomenal staff at the city.

He said they know what they’re doing, they just needed someone to listen and help steer them in the right direction.

Although his plate is full, Buckman didn’t seem to mind it.

“It’s really good to be back,” Buckman said.

He added it feels like stuff is getting done now, which he thinks everyone in the city is happy about.

Although many people have asked him if he plans on applying for the city manager position, right now Buckman is just weighing the possibility.

“I’m thinking about it. I haven’t made any decision for applying for the job,” he said.