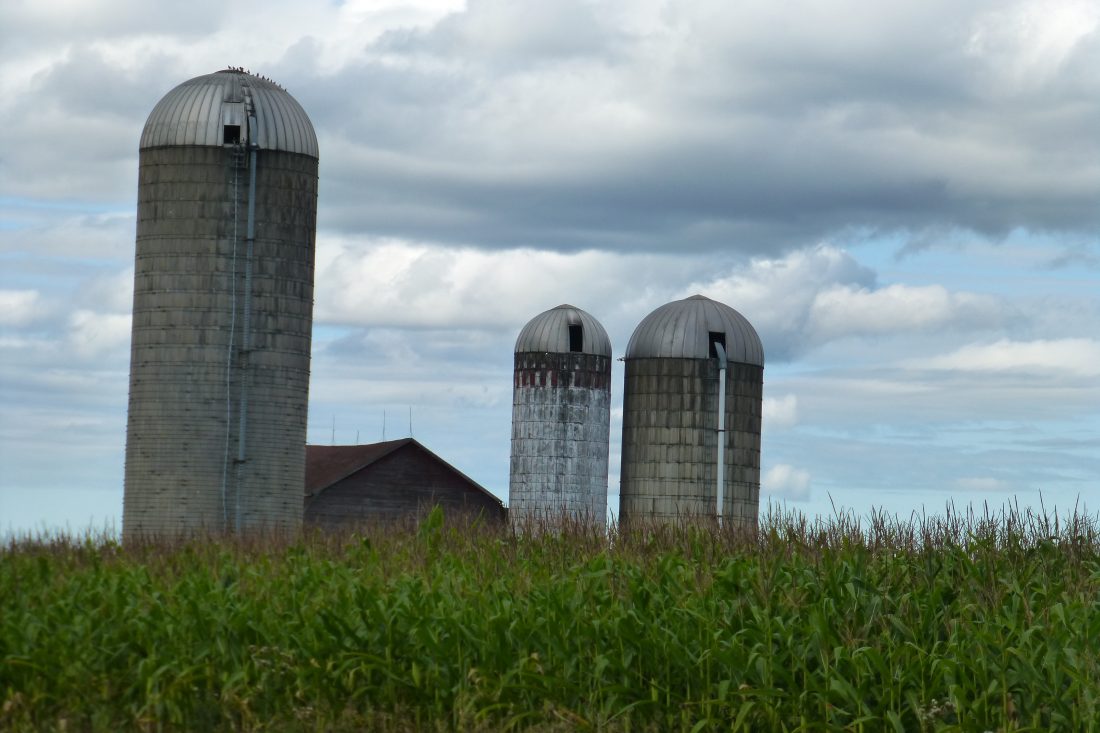 Deborah Prescott | Daily Press Corn stands in front of silos on VanDrese farm off County Road 426 in Delta County. The growing season started out cool and wet, drowning seedlings, and has turned dry in August. Corn crops were further stressed in July by corn earworm caterpillars.

ESCANABA — Whether you are growing vegetables on a small scale for family and friends, or a farmer trying to make money, everyone seems to have the same type of growing season — tough.

This spring was cold and wet, and the same weather continued into early summer, delaying planting. Since then it has been dry. According to the United States Department of Agriculture’s drought monitor, approximately three quarters of the Upper Peninsula is considered abnormally dry.

“The weather has been challenging for growers in Michigan,” said Michigan State University U.P. Extension Research Center Director James DeDecker. “The U.P. has done better than the Lower Peninsula because the soil drains better.”

Many crops were either delayed or prevented from being planted. For some growers it didn’t make sense to plant at all.

“This was an off-year for us, so we only grew enough for friends, family and ourselves,” said Glenn Cody from Immerfrost Farm in Stephenson. “In a normal year, we grow produce for sale either off the farm or at the farmers’ market in Menominee.”

Some farmers were unable to get in crops and some lost root crops from heavy rain drowning seedlings. According to the MSU Extension, crops are late due to late planting activities and field preparation.

“No crops are doing ­exceptionally well,” said DeDecker. “Oats and small grains have done well, but forage, corn and dry beans have not, and there’s a high number of the western bean cutworm this year.”

Corn and dry beans are the western bean cutworm’s favorite meal. It comes out of the ground to lay its eggs on plants and when the eggs hatch the cutworms start eating the plant.

In July corn was stressed by the corn earworm caterpillar. The reduced number of corn plantings condensed the moths to smaller areas to lay their eggs.

Peppers, pumpkins and squash plants have been stressed, resulting in early, smaller and fewer fruits.

“We have Delicate Squash, which is struggling, trying to decide if it wants to produce or not,” said Lucy Pier from Blueberry Pier farm in Menominee. “Cucumbers started off with lots of blossoms but not as many cucumbers. Plants are starting to dry up with the temperature swings that we are having … Pumpkins are not doing as well. They are growing and (then) stop growing as the weather heats up and cools off. They are not sure what is going on.”

There have been no late blight reports of tomatoes or potatoes. Due to delayed plantings of potatoes, farmers may face a tough harvesting decision. They can vine kill the plant at the normal scheduled time of the year, getting a lower yield of potatoes, or kill vines and harvest later, trying to maximize yield. Doing this farmers risk low temperature bruising and freezing, and sorting through the crop can be time consuming.

A new product growing in the U.P. is industrial hemp. Gov. Gretchen Whitmer and the Michigan Department of Agriculture and Rural Development have started an industrial hemp agriculture pilot program. Chatham, Mich. is one of three locations in the state testing the growing season, possible pests, and gathering other pertinent information for farmers who may consider growing it. Widespread production will not be possible until the 2020 growing season.

“We are harvesting the plant for grain and fibers now,” said DeDecker. “The plants that are planned for CBD production are just starting to flower.”

Many growers use a structure called a hoophouse to grow their plants because of the short growing season in the U.P.

“I grow my vegetables mostly in hoophouses,” said Pier.

Pier was only able to use half of the hoophouse in the spring because the beds were flooded with water. They put in some of their garden late after raising the ground level because it was flooded until the middle of June. Some of their produce ripened faster. Her pears are not doing well, but the Whitney Crab apple tree is doing well and ready to pick.

“This was not the best of years for outside plants,” said Cody. “The late spring followed by frequent rains and too many chilly nights did not make for a great growing season. The apple crop is especially disappointing this year.”

Besides weather and pests farmers feel the affect of the trade war with certain crops.

“Usually in these type of weather conditions commodity revenues go up,” said DeDecker. “I’m surprised some crops are only slightly up and soy is still quite low.”

According to DeDecker soy isn’t affected by weather as much because it is planted later in the growing season.

Dairy farms are having a tough year also.

“Dairy farms have been hard hit lately … some milk haulers are charging dairy farmers to haul their milk, which is cutting into the farmers profit,” said DeDecker. “Two farms closed this year, one in Baraga and one from Houghton. It has been a very difficult year for dairy farmers in the U.P.”

The delay of getting seed in the ground and extra moisture after planting has affected growth of possible winter forage supplies for livestock. MSU Extension Field Crop Educator Monica Jean has published information earlier this month titled “Last Minute Emergency Forage Planting Options” to help farmers plan for extending forage supplies. In the Eastern U.P. farmers are reporting an above average hay crop.

“Hopefully we have an extended fall to help finish the growing season,” said DeDecker.

Moderate, centrist: What do these mean?