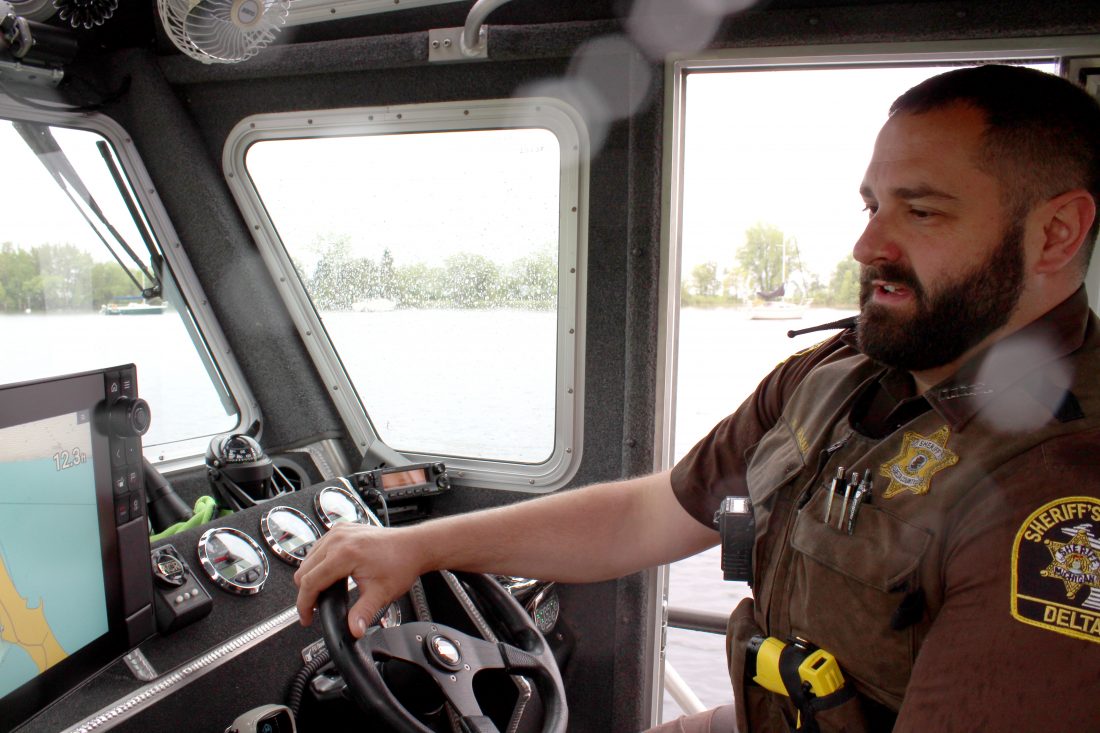 Clarissa Kell | Daily Press Delta County Sheriff’s Deputy Mike Groleau explains the new multifunction display system on the department’s boat while driving the boat in the Escanaba harbor near the fueling docks Wednesday. The new system was installed this spring and can display radar, charts, 3-D imaging of the lakebed, and weather. It also has the ability to overlap different display options or split the screen to show two at a time.

ESCANABA — With around 211 miles of Great Lakes shoreline, 514 miles of rivers/streams and nearly 6,000 acres of inland lakes and ponds, Delta County has an abundance of water recreational opportunities — especially in the summer months. Delta County Sheriff’s Department assigns two deputies to patrol the waters in the department’s boat during the summer.

There are two deputies assigned to the marine division, Deputy Mike Groleau and Deputy Jon Smith.

Groleau said he and Smith work together as a team on the boat, with one driving and one working on the deck.

Even though Groleau and Smith are the marine division deputies, Oswald said other deputies are trained to operate the different watercrafts the department owns.

Delta County Sheriff’s Department has a boat used specifically for the Great Lakes, a smaller boat used for inland lakes and rivers, a large inflatable, and two personal watercrafts.

According to Oswald, common occurrences out on the water are mechanical failures, loss of power, running out of gas, taking on water, fires and medical emergencies.

He added it is especially dangerous when boats are out and they lose power because the waves and off-shore breeze have complete control over the boat, which can be pulled farther away from the shore.

Groleau said at least once a summer a boat will have its engine ripped off due to rough waters and the department will have to tow the boat in to shore.

No matter the weather or time of day, the marine division is prepared to assist those in need of help.

Groleau said they go out in stormy weather and at night. He noted the boat for the Great Lakes has an inflatable tube around it that makes handling the boat in rougher waters easier, and also allows the boat to float if it ever takes on water.

Delta County’s marine division isn’t the only entity out on the water. The U.S. Coast Guard is also stationed at Washington Island and Sturgeon Bay, Wis.

Oswald said the two entities work together and the sheriff’s department has a great working relationship with the Coast Guard.

A new automated identification system will be installed on the department’s boat soon. The system allows the boat to send messages to other boats and allows the Coast Guard to locate the boat.

The Delta County Sheriff’s Dive Rescue Team also works with the marine patrol when needed. Smith and Groleau are the director and assistant director of the team, respectively.

When it comes to being out on the water, there are some tips boaters can use to be better prepared.

Oswald said people should wear life jackets or have them somewhere on the boat they can access quickly. Cellphones should be placed in a plastic bag when out on the water. All boats should have a fire extinguisher, and boats that plan to travel far should have a marine radio system.

Oswald said people should always know the laws and ordinances before going out on the water. He said there are different laws pertaining to different bodies of water in Delta County and people need to be educated on it or they run the risk of getting citations.

The most tickets written are for expired registrations and no life jackets, according to Oswald.

To make sure the boats in Delta County have all the required equipment needed to be out on the water, the marine patrol division will be conducting free boat inspections at three different local boat launches next weekend.

Groleau said no citations will be issued during the free safety check weekend as the event is to help make sure all boaters have all the legal requirements to be on the water.

Upon successful inspection the recipient will receive a an inspection sticker for 2019 that lets the DNR and Delta County Sheriff’s marine division know the boat has all its required items.

ESCANABA - A black bear weighing about 200 pounds was removed from a tree in Escanaba Friday morning — just days ...

EDITOR’S NOTE: Much of the nation has been shut down over the past two-plus months due to the COVID-19 pandemic. ...