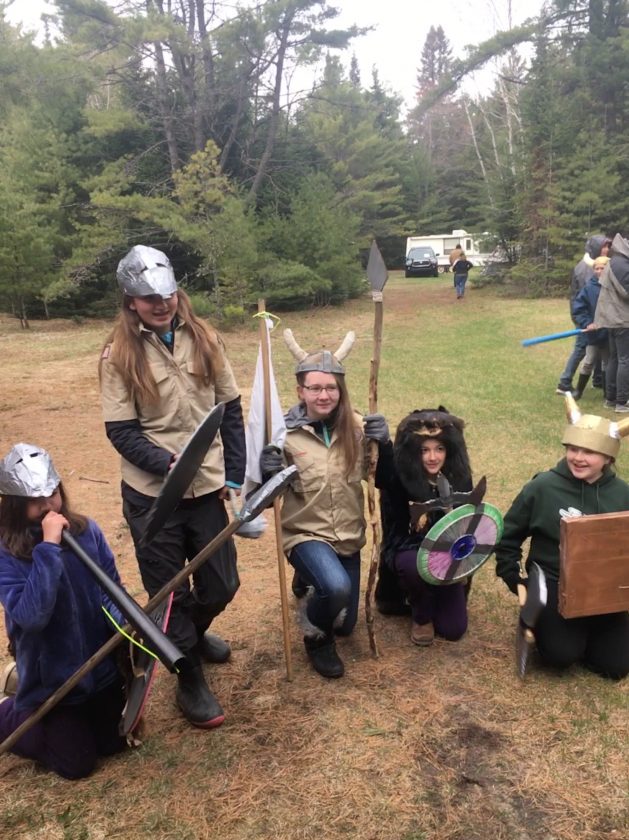 Courtesy photo Scouts from Troop 401, an all-girl troop out of Manistique, pose for a photo in the viking gear they created for the Red Buck Spring Camporee in March. The theme of the camporee was Vikings. The all-girl troop took first place at the event with the other local troops.

In February 2019, the Boy Scouts of America’s showcase program “Boy Scouts” changed its name to “Scouts BSA” and welcomed girls into single-gender troops. Members of Scouts BSA are between the ages of 11 and 17.

There is an all-girl troop in the works in Marquette but is not chartered and operational yet.

“Linked troops both benefit by sharing some adult leadership and the troop committee. Troop 401 has formed from scouts who have siblings in Troop 400, our linked troop,” she said.

He added the only difference is the all-girl troops are required to have a female scoutmaster.

The all-girl troops achieve the same advancements and earn the same merit badges that BSA troops have always had. Members of the BSA Troop for Girls can even achieve the rank of Eagle Scout.

“The BSA program can now train both young men and women to be our future leaders. I am glad to be a part of such an important and beneficial program. BSA Scouting is a program that I believe in. I believe that the values of scouting as outlined in the Scout Law — trustworthy, loyal, helpful, friendly, courteous, kind, obedient, cheerful, thrifty, brave, clean, and reverent — are important and relevant values for both young women and men,” Way said.

Recently the Red Buck Sub-District held its Spring Camporee. The event took place May 17 through 19 at Camp Cooks. Eleven “patrols” of nearly 100 Scouts competed and Troop 401 took first place. A patrol is a small team of normally six to eight members, and troops can have more than one depending on the number of Scouts.

“This was a gathering of Scout troops for a competition with events that scored each patrol based on knowledge of the skills, teamwork, safety and scout spirit,” Way said.

Rose said it was obvious it was the girls first “camp-out” competition as they were excited and ready.

“They were keyed up, they were gung-ho. And they did a good job and were a step ahead of everyone on most events,” he said on the all-girl troop winning.

There were eight events that the Scouts were scored on, seven of which were out of 100 points and one out of 10 points.

The theme of the camporee was “Vikings,” so each event tested the Scouts on different skillsets but with a Viking twist.

An example is one of the events was a compass and navigation course, but the scenario for the course was a Viking had stashed their loot somewhere in the woods and the Scouts had to use their navigation skills to find the loot.

Way said her troop spent a considerable amount of time preparing for the camporee by learning Scout pioneering skills, planning meals the Scouts would prepare for an event, designing a functioning gate and camp gadgets, learning to use a map and compass, creating Viking-themed banners, shields and weapons, and composing an original Viking-themed skit.

“Despite the rain the Scouts had a blast and it was great to see them working together as a patrol at each event,” she said.

Rose said two local charters have girl members, one in Escanaba and one in Bark River.

The local girls in the Cub Scouts participated in the March Pinewood Derby finals too, Rose noted.