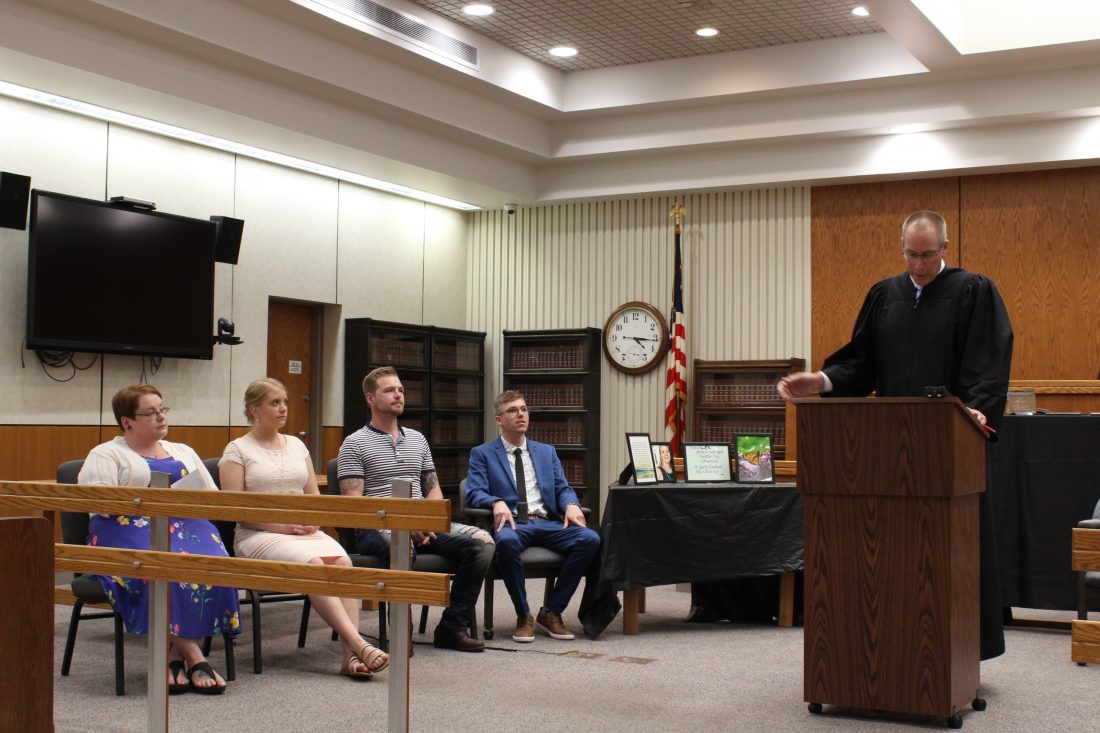 ESCANABA — Another small group of Delta County’s drug and sobriety court graduates were celebrated during a ceremony held at the Delta County Courthouse Monday night. Aaron Bastian, Rebecca Bussineau, Cody Miller and Ashley Stephens were the individuals that graduated from the program.

“There’s also the quiet kind of courage. Courage isn’t always a roar. It’s that voice at the end of the day that says, ‘You know what? We’re going to try again tomorrow. I may have failed today but I’m going to try tomorrow.’ And that’s the kind of courage these four have,” Delta County District Court Judge Steven Parks said during the ceremony.

Parks spearheaded the effort of bringing the drug court program to Delta County, and since its inception in 2016, the county’s drug court has seen 10 individuals graduate, including those who graduated Monday.

The specialized treatment court addresses the root of many crimes — drug addiction — so those with addictions can learn to live without drugs and not re-offend, thus stopping the chain of crimes that often accompanies drug abuse.

With the intent of helping people addicted to drugs and alcohol overcome their habits instead of sentencing them to jail time, this program provides closely-supervised individualized probation for each participant.

In May 2018, the drug court’s first graduation ceremony took place. At this time, April Dubord-Eskofski, Amara Nelson and Joseph Shinaver graduated from the program.

Drug Court Case Manager Jeana LaCarte introduced each graduate by providing details of their journeys that lead them to their graduation.

LaCarte started by introducing Bastian. According to LaCarte, Bastian was convicted of possession of suboxone 447 days ago and entered the program with meth as his drug of choice.

“Mr. Bastian took his first drug when he was just 13-years-old. He became an IV drug user at the end of 2017 for only four short months. Those four short months destroyed his life. Today I am proud to tell you that Mr. Bastian has 333 days of continued sobriety,” LaCarte said.

Next, she introduced Bussineau. LaCarte said Bussineau showed a great deal of bravery when she opted into the drug court program as she was only facing an 180 day sentence.

“She realized it was time for her to make a life change. Becky came into the program blinded by her addiction. Her drug of choice was opioids. To be honest, there were a lot of people doubting that she would ever be successful in the program. Six-hundred and sixty-five days later, she proved them all wrong,” LaCarte said.

Miller was introduced next by LaCarte. According to LaCarte, almost 500 days ago Miller was charged with a felony of driving under the influence – third offense and he was facing nine months after pleading guilty when he was provided the opportunity of participating in the drug court program.

“He was given an opportunity to earn his way out of jail by completing drug court, which he did in an impressive fashion. When his bond conditions are taken into consideration, he has been clean for a total of 477 days,” LaCarte said.

Finally, she introduced Stephens. LaCarte said it didn’t take the court long to realize Stephens was very motivated to change.

“It has been 447 days since Ms. Stephens was sentenced into the Delta County drug court. She was facing a prison term if she didn’t successfully complete the terms of drug court. At the age of just 12-years-old, she tried her very first drug. At the age of 24, she had become an IV drug user. During her active addiction she had lied and hurt many people close to her. She has since worked very hard to try to make all of her wrongs right,” she said.

Delta County Administrator Philip Strom went on to deliver the opening remarks for the ceremony. He said he was very honored to have an innovative court in Delta County with team members that care for each and every one of the participants.

The graduation speaker for Monday’s ceremony was Dr. Dennis Leveille.

Leveille spoke on how the public isn’t educated on what addiction truly is and does to an individual, and that the individuals graduating had the choice in-front of them to continue in a life of sobriety with the tools provided through the program.

Testimonials from the graduates, and in one case, a graduate’s family member followed Leveille’s speech.

Bastian and Bussineau both stood up in-front of the crowded courtroom to deliver their own testimonials.

Parks then presented certificates of graduation to Bastian, Bussineau, Miller and Stephens, and recognized local people and businesses who have supported the drug court.

After delivering his closing remarks, Parks realized they had continued after the testimonials despite Stephens’ mother wanting a chance to speak. Stephen’s mother then addressed her daughter and the other graduates about their accomplishments.

ESCANABA - A black bear weighing about 200 pounds was removed from a tree in Escanaba Friday morning — just days ...

EDITOR’S NOTE: Much of the nation has been shut down over the past two-plus months due to the COVID-19 pandemic. ...