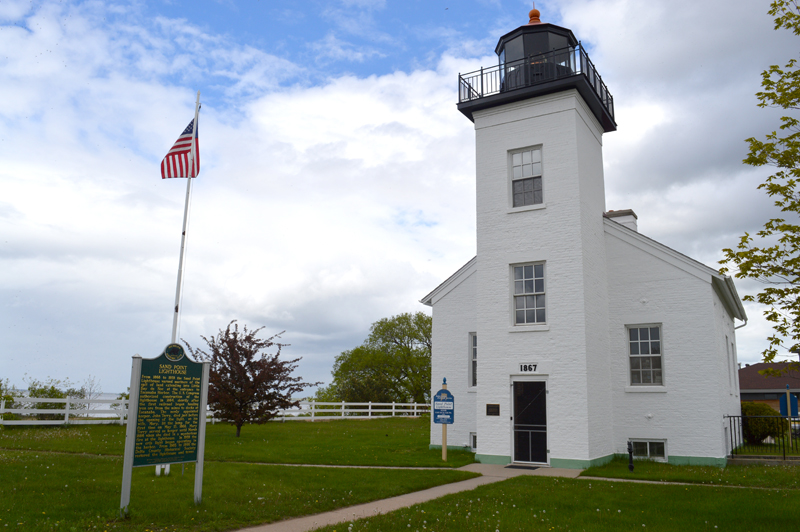 Haley Gustafson | Daily Press Above, the Sand Point Lighthouse in Escanaba sits under a cloudy sky Tuesday afternoon. The lighthouse will be honored on July 3 at 1:30 p.m. by the Delta County Historical Society (DCHS) to commemorate its 150th anniversary. The lighthouse began servicing mariners on Little Bay de Noc on May 13, 1868 and continued to do so until 1939.

ESCANABA — The Sand Point Lighthouse in Escanaba will soon be celebrating its 150th anniversary.

To commemorate this, the Delta County Historical Society (DCHS) will be hosting a celebration on Monday, July 3 at 1:30 p.m. During the event, refreshments and free admission to both the lighthouse and DCHS museum will be offered for those who attend.

Vice President of DCHS, Elizabeth Keller, said the event is meant to commemorate the keepers of the lighthouse, along with the building itself. Keller is also a co-chair for the lighthouse committee, which maintains the building.

“We are really excited about doing this,” said Keller.

Local brew house, Hereford and Hops and local winery, Leigh’s Garden Winery, will also be honoring the lighthouse and keepers with signature drinks, said Keller. Attendees will be able to sample the drinks during the 150th anniversary event.

According to DCHS website, www.deltahistorical.org, the Sand Point Lighthouse was constructed in 1867 by the National Lighthouse Service at a cost of $11,000. The structure of the lighthouse consists of a rectangular shape, and is two and a half stories tall, with an attached brick tower at the top.

In the tower, was a light that cast a red signal that was to warn ships about the Sand Point and the sand reef, which reached out in the Bay. The light was a fresnel lens, which was invented by French physicist, Augustin-Jean Fresnel.

The lighthouse, said Keller, served mariners from 1868 to 1939, except for a short time when it was out of commission in 1866 because of a fire that severely damaged the building. The blaze also took the life of Mary Terry, who was one of the first women light keepers on the Great Lakes, said Keller.

The keepers used to reside in the building, but in 1985, the Coast Guard discontinued use of the building as a residence. With the threat of demolition, the DCHS decided to take charge, as it was “known that under the modern facade was the Lighthouse building, one of the oldest and most historic buildings in the area.”

A lease was later negotiated through the Coast Guard, and research and fundraising to keep the lighthouse began.

Keller explained to help honor the keepers and the Sand Point Lighthouse, local businesses as well as the city of Escanaba have been a tremendous help in making the anniversary celebration happen, adding since the lighthouse’s inception, community members have embraced it.

“It was the whole town that was in support of it,” said Keller.

One activity that will be held leading up to 150th anniversary celebration is a lighthouse painting class at Leigh’s Garden Winery in Escanaba on June 1, said Keller. A full list of scheduled events leading up to the celebration will also be made available before the July 3 event and will be available in local businesses in downtown Escanaba.

In addition, the Escanaba Public Library is currently seeking photos of the lighthouse, said Keller. The photos, which can be submitted via email, will then be featured in a slide show, online and at the library during June and July. Photos can be submitted in .jpeg format and sent to mciofu@escanabalibrary.org. Photos can also be brought to the library on a flash drive by June 15.

For more information, visit the library’s website at www.escanabalibrary.org.

Keller also said the DCHS and lighthouse committee are seeking family members of the lighthouse keepers that ran Sand Point from 1868-1939.

ESCANABA — Applying for scholarships can be a full-time job for students heading to college. To ease the process ...

County gets ready for primary vote

ESCANABA — Two snowmobilers lost their lives in separate accidents in the Upper Peninsula Tuesday. A ...