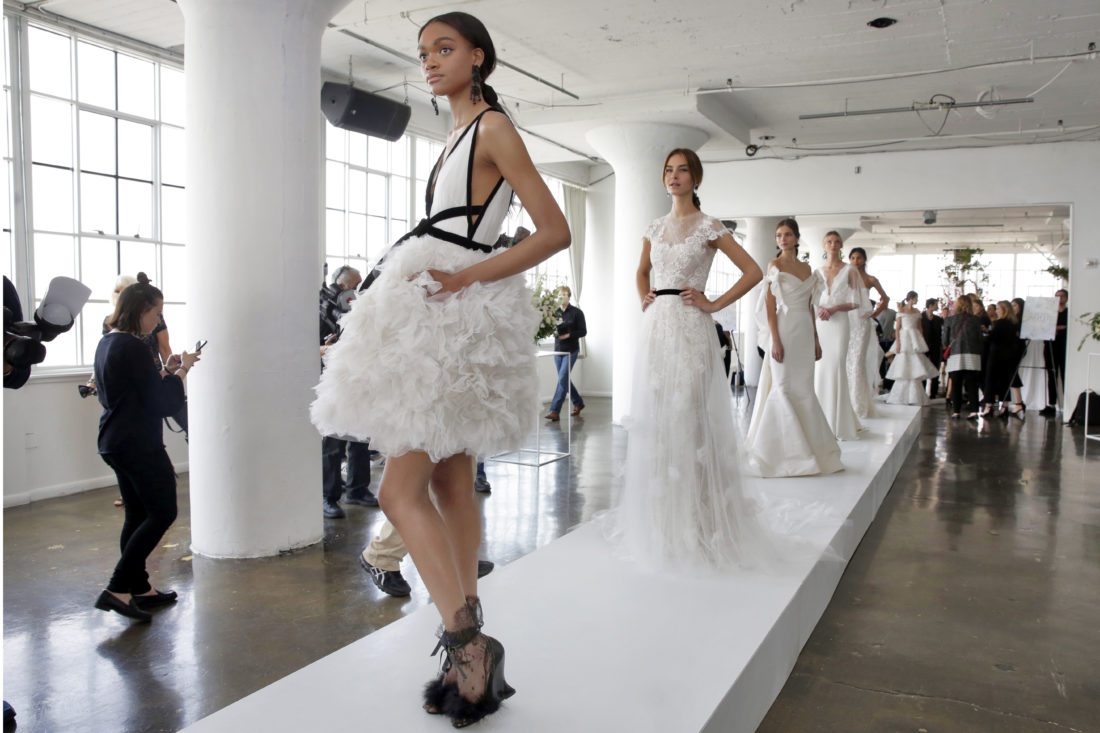 FILE - In this April 20, 2017, file photo, the Marchesa bridal collection is presented during bridal fashion week in New York. The recent round of spring 2018 bridal shows pointed to a turn back to tradition, sometimes with modern twists, along with plenty of options in silhouettes. (AP Photo/Richard Drew, File)

NEW YORK (AP) — The recent round of spring 2018 bridal shows pointed to a turn back to tradition, sometimes with modern twists, along with plenty of options in silhouettes.

Black accents were plentiful and jewelry seemed to be mostly about the neck. Formal gloves were back and statement shoes went on the rise.

Vera Wang once went with a collection of black dresses, but there hasn’t been a lot of black in bridal since, said Shelley Brown, fashion director for the wedding site TheKnot.com.

This season, the color seeped back in, mostly as an accent, she said.

Reem Acra was inspired, in part, by the color for her 20th-anniversary show in collaboration with Tiffany & Co., playing with black as an ode to Audrey Hepburn in the 1961 film “Breakfast at Tiffany’s” at the iconic jewelry house’s flagship store on Fifth Avenue.

“She started the show off with a bunch of black evening gowns that can also be ordered in white. Throughout the show she had black bows and different kinds of black accents,” Brown said.

Acra, herself, said of the color: “Black is an accent to the luxury world.”

At Marchesa, there were also a lot of black bows, black earrings and furry, feathery black shoes. Bridal designer Kelly Faetanini sent a black ostrich-feather ball gown down her runway.

“That trend really jumped out at us because black isn’t usually a color you associate with bridal, but done the way it was done this season, it felt very romantic and elegant,” Brown said. “I think black accents are a classic way to make a statement.”

Black, she said, when done right, can also lend a modern, edgy feel to brides looking to go in that direction.

Brown notes a swing back to a more traditional floor-length hemline in gowns after short looks and even pantsuits shared a moment several seasons ago.

While black popped, so did white in a range of shades, said designer Monique Lhuillier.

“White looks right again. It feels new and timeless at the same time. I really embraced that this season,” she said.

“I noticed a return of all-over beading,” Brown said. “That embellishment has obviously been a bridal staple for a really long time, but I haven’t seen over-the-top beaded dresses in a while and I noticed a lot of those came down the runway.”

There was beaded fringe, art deco beading and all-over pearls and sequins, she said, and fewer sexy, nearly nude dresses.

Lela Rose, for instance, showed an off-the-shoulder gown with a wide neckline that was adorned with pearls, along with a gown nearly covered in them.

“You could actually hear it as it moved on the runway,” Brown said. “Pearls are having a ready-to-wear moment, too.”

Jenny Packham, Naeem Khan and Pronovias, which recently showed in Barcelona, Spain, along with Justin Alexander, rolled out all-over beading, Brown said. The brand Theia went a step further with looks completely inspired by pearls in shimmery gowns and embellishment.

Statement earrings took a backseat to the neck, Brown said.

Generally, there was less statement jewelry than in the recent past, Brown said. Chokers are a ready-to-wear trend that has translated to bridal and all kinds — feathered, black velvet and pearl-encrusted — are included, she said.

And gloves are back for brides, also of all kinds.

Monique Lhuillier showed wrist-length in white lace. Others did elbow-length sheer gloves with embellishment, including Lela Rose. Reem Acra did a lot of elbow-length in black.

Yes, brides obsess about their shoes, even when you can barely see them.

Some designers went all out on shoes this season, Marchesa included. Crowds gathered at the feet of one model in a short look at the Marchesa presentation, which is the type of show where models stand still. She was wearing a pair of black shoes with feathers.

“They were really, really spectacular,” Brown said. “They’re an important accessory. There are definitely more options where your shoes are concerned, but you can kind of make any shoe a bridal shoe. There are even bridal sneakers that have been around for several seasons.”

In her travels as an accessories spotter, Brown has come across plenty of white shoes with laser-cut leather and white feather touches that would be perfect for the right bride. But it’s not just about black and white. Pastels, iridescents and metallics have been on recent runways, too, in both dresses and shoes.

Georgina Chapman, half the Marchesa design team with Keren Craig, said from their recent show that, sometimes, shoes for brides are a private affair.

“They want to know they have them underneath there,” Chapman said. “It’s like wearing great lingerie, you know, not many people may see it but you know you have it on.”