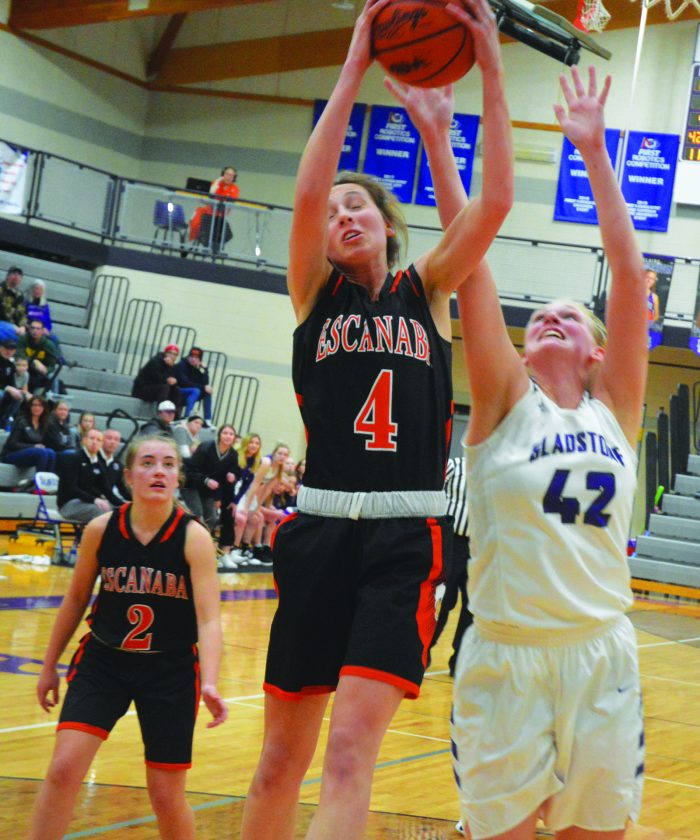 Austin Hemmingson | Daily Press Escanaba’s Nicole Kamin (4) and Gladstone’s Megan Crow (42) fight for a rebound while Escanaba’s Bailey Barron (2) looks on Feb. 17 at Gladstone. After spending the majority of their careers playing against each other, the two bayshore rivals will team up at Grand Valley State University after their senior seasons.

ESCANABA — Nicole Kamin and Megan Crow have known each other since fourth grade. The two local star basketball players have spent some time playing together on AAU travel teams since eighth grade, but the majority of their careers have been spent playing against each other in the bayshore rivalry between Escanaba and Gladstone.

But on Jan. 8, Crow committed to playing basketball at Grand Valley State University, five months after Kamin announced her commitment to play there.

Did Kamin have an influence on her decision? Perhaps.

“Nicole definitely did have an influence on me going to Grand Valley,” Crow admitted. “We would actually go down to our colleges together, and she said she fell in love with Grand Valley. I wasn’t able to go with her the first time because my grandma was sick with cancer, so I wasn’t able to go … but then she invited me down to go to a couple games to watch Grand Valley and I kind of just started to fall in love with the campus. Knowing that there’s going to be a familiar face on the team and someone that I can live with in an apartment together is really helpful and really nice, so that also helps. Plus, having our families living relatively close together would be really nice for traveling so they could car pool together and come to our games.

“I know how competitive Nicole is and how much she loves basketball, so having her commit to that program showed me that’s what they’re all about — the love of the game and always wanting to get better and pushing each other, and that’s exactly what I wanted.”

Kamin’s reaction to her decision in one word? Excitement.

“Oh my gosh, I was so excited for her,” Kamin said. “She was kind of iffy on if she wanted to go there for sure, and I was really encouraging her to go there. I was like, ‘Megan, you have to go there. We can finally play together and be on the same team.’ I would say I had a pretty big influence on her.”

Each player has a different style, but both are effective.

At 5-foot-11, Kamin plays as a forward for the Eskymos. She’s almost always the most athletic girl on the court and can get to the basket seemingly at will. Couple that with her ability to shoot the ball from the outside and defend, and you have one of the most complete players in the entire U.P.

“I honestly wish I had her Eurostep and the way she easily glides through the court,” Crow said. “When I tell people I can’t run, I can’t. I’m more like a grizzly bear running down the court and she’s like a gazelle. She’s just so graceful and so athletic, and she’s just so confident on the court. I wish I had her confidence.”

On the flip side, Crow stands at 6-3 and is arguably the most dominant post player in the U.P. She’s incredibly efficient, rebounds at a high rate and makes life very difficult on opposing offenses because of her presence in the middle on the defensive end.

Kamin acknowledged she wished she had Crow’s post moves.

“More recently I’ve noticed she’s come up with a few more,” Kamin said. “I’m like, ‘How do you even do that, Megan!?’ I guess I kind of get frustrated when I’m guarding her, but that’s something that I wish I could take away from it … her down low moves.”

That has been the case a lot. Kamin is Esky’s tallest player, so naturally, she’s spent a lot of time guarding Crow in the post.

“I would say it’s pretty hard going against her,” Kamin said. “She’s able to use her moves to get around me and shoot over me … that’s always like a hard thing. I’m not used to guarding a post player, but I’m the tallest one on our team so I always have to guard Megan. It’s hard guarding a post player.”

Crow wishes she didn’t have to have Kamin guarding her, either.

“When we play against each other, it’s very awkward in the first quarter,” Crow said. “I see her and I want to pass it to her, and I’m like oh wait, ‘I can’t because she’s not on my team right now.’ Plus, we mainly just joke around. If there’s a timeout, we’ll say something funny to each other and we’ll laugh, and then we’ll get back into game mode.”

When they’ve been teammates in AAU, life has been much easier. They’re good friends off the court, and that chemistry shows itself on the court.

“It’s way better,” Kamin said. “For high school we don’t really have any size, so we never have to feed a post player. We usually just kind of play outside the perimeter. But for AAU, it’s nice to be able to pass it inside and not always have to drive inside. I can just get it to Megan inside to get it there.”

“On the court when we’re playing together, we have great chemistry,” she said. “I know exactly where she’s going to be and she knows exactly when I need the ball … it’s great.”

Kamin’s Eskymos got the better of Crow’s Braves every time in three very close games last season, including the district final in which the Eskymos captured their first district title in 20 years. A pair of Grand Valley coaches came to their clash in Escanaba on Dec. 27, almost two weeks before Crow made her decision.

“The Grand Valley coaches came to our Escanaba away game and the coach texted me after the game and said, ‘Wouldn’t it be so cool to bring two more caring, amazing U.P. kids down here,'” Crow said.

Barring injury, each player should reach 1,000 career points next year in their senior season. Kamin currently has 944 points for her career, while Crow has 813. Each player has unfinished business, but neither can wait for the day when they will finally be on the same team.

“It’s going to be so much better being on the same team, rather than being against each other all the time,” Kamin said. “I just can’t wait for that to happen.”

Crow says the two have something special planned for their final game against each other.

“After our last game against each other, we’re going to hold a Grand Valley flag and say, ‘Well, now we’re done being enemies. Let’s be teammates,'” Crow said. “We’re really excited to become teammates.”