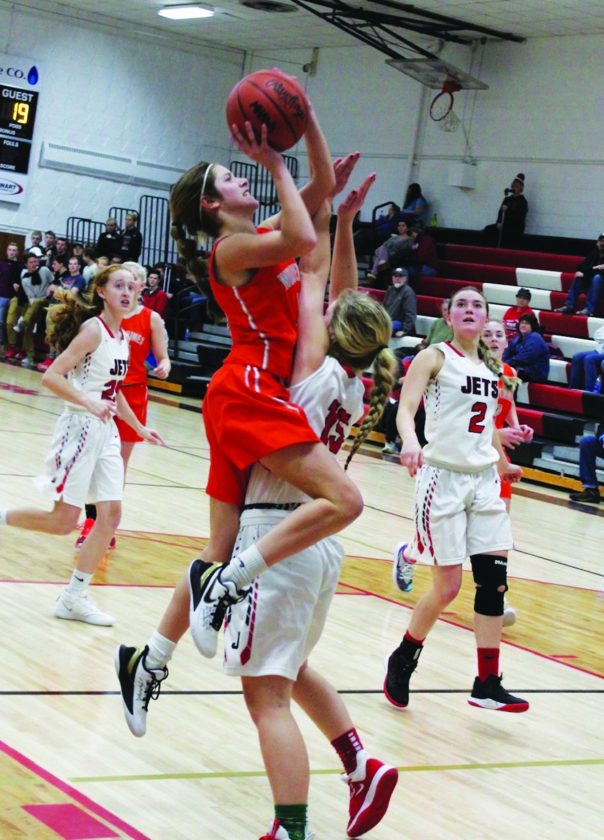 POWERS — On Dec. 10, the Mid Peninsula girls proved their mettle with a tough, one-point road win, 43-42, over North Central. It was the Wolverines’ second one-point road win in a row after they edged Carney-Nadeau, 46-45, at the buzzer on Dec. 6.

With the win over North Central, the Wolverines proved their stunning 40-38 season-opening loss to Rapid River was a fluke and that the win over Carney wasn’t.

“We started a little shaky, partly because they played great defense,” Mid Pen coach Phil Croasdell said after the game. “We were forcing things and told the girls to relax. … The teams are very equal. These were defensive-minded teams both ways. Both teams are quick and switch real well. I thought Daisy (Englund) and Camryn (Croasdell) played great defense on the Arsenault girls.”

Kennedy Englund was Mid Pen’s scoring leader all season. She struggled with her shot on this night, but made the biggest one of the game on a triple from the left wing in the final 20 seconds.

“Kennedy has been struggling from the floor, but she’ll come around,” said Croasdell. “Tonight, she hit some clutch shots…”

The game was back-and-forth with the lead changing hands multiple times.

Kennedy Englund gave Mid Pen a 38-35 lead on a jumper with three minutes left before back-to-back triples from Andie Arsenault put the Jets ahead 41-38 with just 1:45 remaining.

“We felt we had some momentum after Andie hit those big 3s,” Jets coach Lee Vincent said. “… We’re pretty even with them. I thought Jaiden (Fleetwood) did heck of a job on Kennedy. We started in a zone, but that wasn’t enough because they have too many good shooters.”

Daisy Englund brought the Wolverines within 41-40 with a layup before Kennedy Englund drilled the game-winner.

“It was nip and tuck all night,” said Vincent. “This game could have gone either way. … We have a lot of teams in our (Skyline Central) conference that are pretty even and every team is going to get better.”

North Central lost for the only time first in its first five games, but injuries and illness plagued the Jets for the remainder of their season. They finished 11-10 after a 32-30 loss at Carney in their district opener on March 2.

The Wolverines went on to have plenty of success before finishing their season 15-6 after a 51-47 home loss to Munising in a district opener on March 2.

Kennedy Englund, a Bay College recruit, averaged 17.1 points per game for the season, which ranked second among Delta County area scoring leaders. Evidently, Croasdell was right when he said she’ll come around.