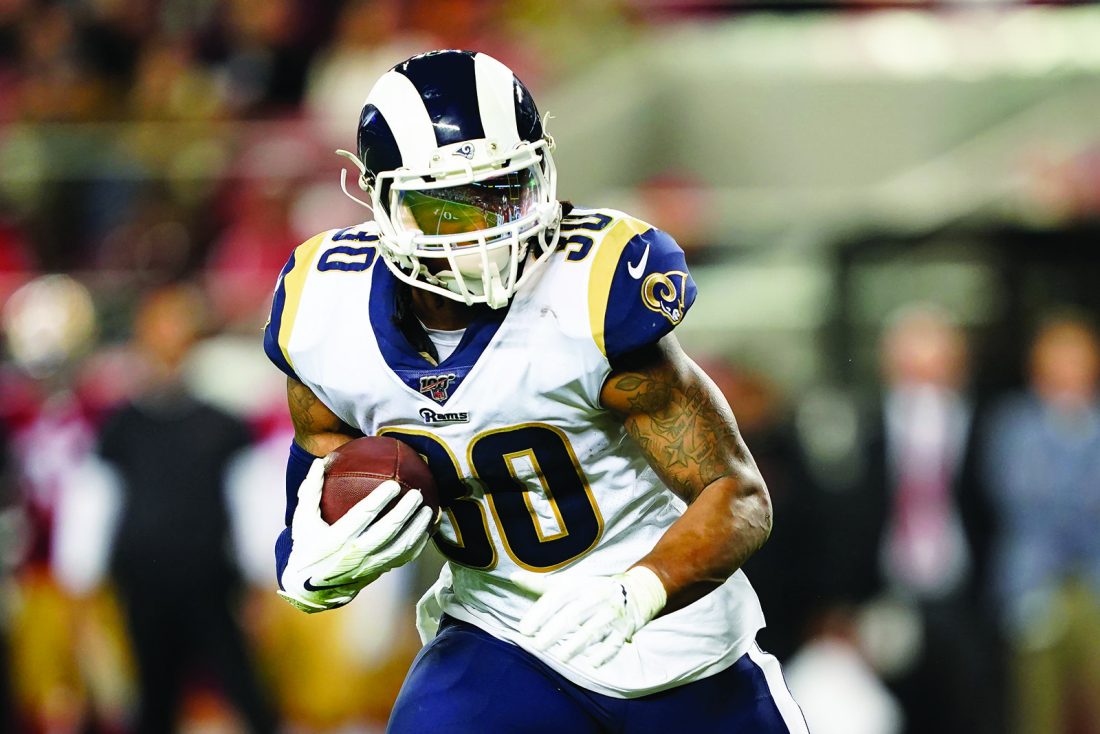 AP file photo Los Angeles Rams running back Todd Gurley II carries against the San Francisco 49ers during the first half of a game in Santa Clara, Calif on Dec. 21, 2019. The Rams have released Gurley, their superstar running back with a massive contract and a troubling injury history. The Rams made the move Thursday several minutes before roughly $10 million in the three-time Pro Bowl selection’s contract became fully guaranteed.

Todd Gurley has gone from the NFL’s top running back to looking for a job.

In a move designed to save the Los Angeles Rams about $10 million that would have become guaranteed Thursday, they said goodbye to Gurley. Perhaps the game’s best rusher in 2017 and ’18 but plagued by knee problems lately, Gurley has been sent on a route diametrically opposite to such big names as Tom Brady, headed to Tampa, and Philip Rivers, now with Indianapolis.

But after helping the Rams to the NFC title that season, he injured his left knee and it slowed him considerably — first in the postseason run to the Super Bowl, then all of last season. He rushed for a career-low 857 yards last year while playing sparingly.

His release can’t be comforting to other running backs around the NFL. If Gurley is expendable — yes, the contract and injury played a key role — then can any RB feel secure?

Earlier Thursday, the Lions agreed to trade their best cornerback, Darius Slay, to Philadelphia. Agent Drew Rosenhaus confirmed the trade and that Slay has agreed to a three-year, $50 million extension with the Eagles.

Slay wanted a new contract before last season and did not attend Detroit’s mandatory minicamp. He ended up reporting to training camp and played well enough to earn a third Pro Bowl nod.

Denver waived 2013 Super Bowl MVP Joe Flacco. He had lost his job to rookie Drew Lock and also has neck issues that could affect him if he continues playing.

Also Thursday, the NFL changed course and will be allowing teams to announce signings they have reached with free agents, as well as trades, when all paperwork is filed.

Though the league’s business year began Wednesday the NFL instructed teams to hold back direct confirmations of those transactions because they are not official until contracts are signed and players have taken physicals. The agreements and trades leaked out anyway.

On Thursday the NFL sent a memo to the 32 teams telling them it has clarified its policy.

Once teams make official any signings that are listed on the daily transactions that the league provides, there is no prohibition on announcing those moves. Those contracts must be agreed upon and submitted to all parties, including the player and agent. Similarly, trades can be announced once the paperwork has been submitted.

The league has barred travel by players to team facilities and also halted club personnel traveling to meet with free agents as a safeguard against the new coronavirus.

For most people, the new coronavirus causes only mild or moderate symptoms, such as fever and cough. For some, especially older adults and people with existing health problems, it can cause more severe illness, including pneumonia. The vast majority of people recover from the new virus. According to the World Health Organization, people with mild illness recover in about two weeks, while those with more severe illness may take three to six weeks to recover.