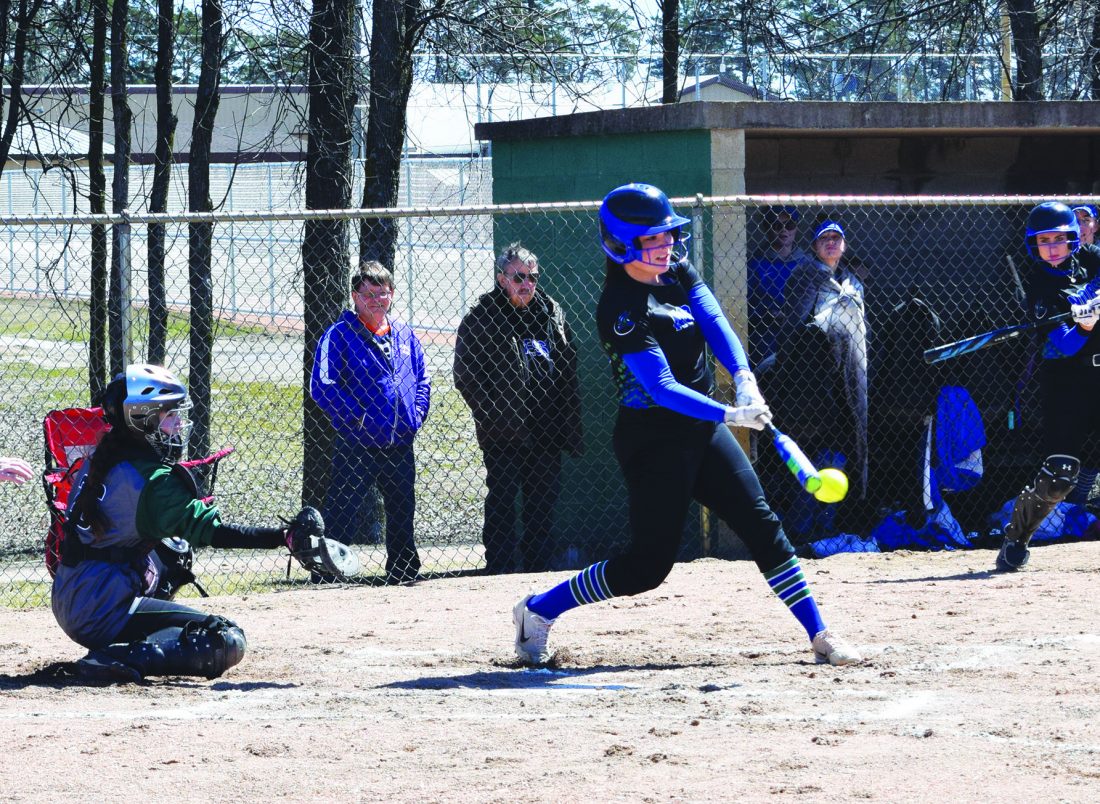 Justin St. Ours | Daily Press Bay College’s Madison Griffin hits a pitch during a game against Gogebic Community College last season. Griffin is one of five returning players for the Norse, who begin their season tonight against the Concordia University JV team at the Superior Dome in Marquette.

ESCANABA — If last year’s inaugural season was any indication, the Bay College softball program is in great hands and headed in the right direction.

Under first-year head coach Heidi Charon, the Norse went 28-9 and were runner-up in the Region 13 tournament.

Now entering their second season in mid-February, the Norse begin their 2020 campaign today and Sunday with a pair of games at the Superior Dome in Marquette. Bay plays the Concordia University JV team tonight at 11 p.m. before taking on Northern Michigan University Sunday morning at 10 a.m.

Charon is simply excited for the opportunity to begin the season this early.

“I am just really excited for how hard the girls have worked, and now giving them the chance to test their skills this early in the season is pretty exciting for us,” she said in a phone interview Friday. “Even though we’ve done a ton of scrimmaging and live hitting, it’s always exciting to see how your pitchers react.”

Charon noted her sophomore class returns plenty of power to the lineup. She also had high praise for Chaillier and Kaukola, while also noting a few other freshmen to keep an eye on.

“I know I’ve mentioned Lexi Chaillier and Korey Kaukola, but Morgan Letteriello will play second base and be in the heart of the lineup,” she said. “We can use her as a relief pitcher and she can play first base, too. She’s a really strong athlete.”

“I’m also excited to watch Eden Oswald and Brittany Schwartz,” Sharon said. “Brittany hasn’t played in nearly two years coming off an ACL injury, so I’m excited to see what she can do.”

After the Norse open in Marquette this weekend, they will be off to Florida for 12 games from March 7-13. Bay had great success in its trip to Florida last season, but Charon hopes for even bigger things with a more experienced bunch this season.

“It was a big thing for us last year to start off. It was just critical to start off on the right foot,” she said. “I’m just excited this year because we’re going to start off so much further along. We had a really good team last year, but we were all brand new. That’s a lot to overcome and really challenging. This year, we feel a lot more confident in ourselves. Our sophomores have done a great job and the freshmen have just absorbed it. They’re right on board.”

The only team that consistently gave the Norse fits a season ago was Dawson Community College. Dawson defeated the Norse 15-3 in the Region 13 championship game.

Charon noted one of the goals her team has talked about is giving them more of a challenge this time around.

“We hope to give Dawson Community College a fight this year,” she said. “They’re a very strong and well-established team. Last year, we were competitive with them for a little bit but I really think we can give them a little more of a fight this year. I think that’s a really good goal for us and a great challenge.”

Bay’s first home games are April 25 and 26 when it hosts Dakota County Technical College for a four-game weekend series. The regular season wraps up with a doubleheader against Gogebic Community College May 3.