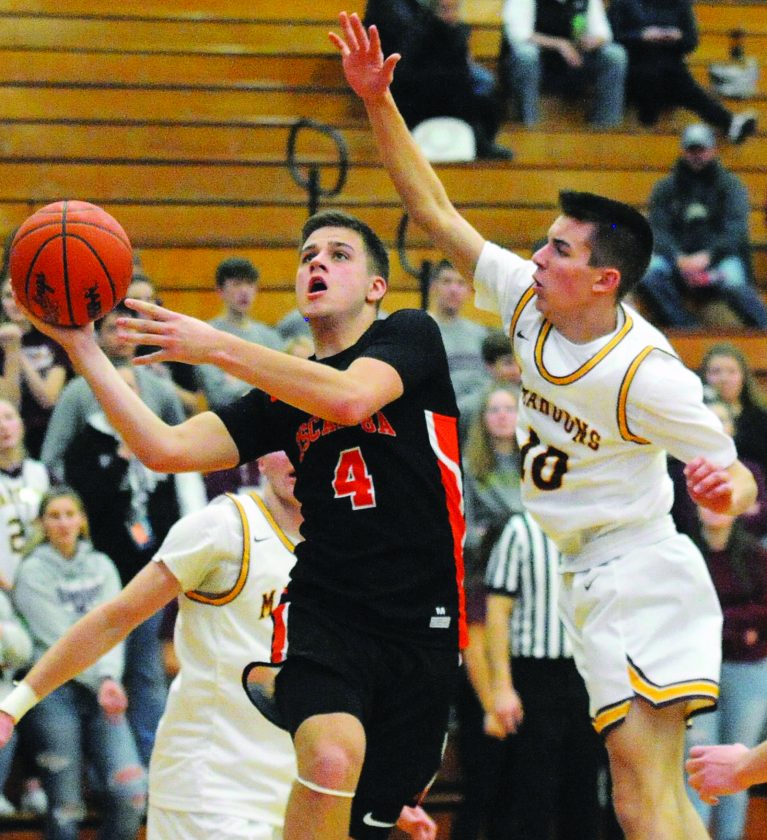 Brian Bell | Marinette EagleHerald Escanaba’s Brandon Frazer shoots a layup against the defense of Menominee’s Zach Starzynski during the second half of Tuesday’s game in Menominee.

MENOMINEE — An uninspired start to the game by the Menominee boys basketball team allowed Escanaba to take a 19-6 advantage after the first quarter and the Eskymos were able to hold on the rest of the way to stay perfect in the Great Northern Conference (4-0) with a 64-44 victory on Tuesday night.

Escanaba ran a 1-3-1 zone defense against the Maroons and Menominee failed to attack the openings in the opening quarter, trying to throw long passes that were tipped or stolen and allowed the Eskymos to get out in transition for easy baskets in the early going.

“Escanaba’s defenders were standing 10 feet from us and we were still trying to pass around them instead of drawing them to us and finding someone open. I thought in the second half we did a much better job of that and even in the second quarter, but only scoring six points with a bunch of turnovers that led to easy baskets for them really put us in a bind as well.”

Menominee’s only two baskets in the first quarter came on 3-pointers from Keagan Monroe and Brady Badker and when Esky wasn’t running in transition, Brandon Frazer and Peyton Fedell were able to play an inside-out game with 6-foot-7 big man Carter Hudson and were able to hurt the Maroons from all over the floor.

Hudson got free for two baskets in the paint in the first quarter and Fedell had nine in the opener to help Esky out to its 19-6 lead after one.

One of the keys to the game for the Eskymos coming in was to try and limit the opportunities in the paint for Monroe and sophomore point guard Aidan Bellisle, and they were able to do that by pinching hard in the creases of the zone and clogging the paint with bodies anytime they got close.

“After watching the Marinette game we knew that Monroe and Bellisle like to get in the paint and they have the ability to score a lot of points once they get there,” Esky coach Tracy Hudson said.

“I think we were able to disrupt (Menominee’s) rhythm by getting in the passing lanes and that turned in to a lot of fast break looks for us.”

Menominee started the second quarter on a 6-0 run on a jumper from Cooper Conway, a steal and fast break dunk from Monroe and a baseline drive by Zach Starzynski to cut the deficit to 19-12, but an up-and-under from Hudson stopped the run for a brief moment and forced Menominee into a timeout with 6 minutes, 38 seconds before halftime.

Monroe converted a three-point play out of the timeout but Esky responded with buckets from Fedell and Bryant Maki to get the lead back up to 10 at 25-15.

After an offensive rebound and a basket from Starzynski, Maki grabbed a defensive rebound on Menominee’s next possession and raced the length of the court for a layup to give Esky a 36-22 lead with under a minute to play. Menominee slowed the ball down and held for the last shot, and after the play didn’t work Starzynski got free at the top of the key and splashed a triple before the halftime buzzer to head into the half trailing 36-25.

The Maroons moved the ball much better against the zone in the second quarter, but still had too many lapses defensively, something Larson attributes to just not having the drive to make a play on that side of the floor.

“We have not shown the grittiness or focus or intensity to be able to stop someone, and until that happens we will continue to get the same result,” Larson said. “For all of the easy baskets we give up, we are not good enough offensively to overcome that. So, until something changes and we start taking something away from the opposing team … we’re not going to change the results we’ve been getting.”

Badker came out of the gates hot for Menominee to start the second half, dropping in a corner 3-pointer but so did Esky’s Connor Smale as he canned two triples on back-to-back possessions from the same spot to put Esky back up 42-28.

Not to be outdone, Badker came back down the court after both teams exchanged baskets and knocked two more 3-pointers from the top of the key to cut the lead to 44-36 as Esky took a timeout with 4:56 left in the third.

“Brady has been close to having a good shooting night for a while now and it was nice to see him knock down a few and I think that’s going to grow his confidence. Against a zone you almost have to knock down a few outside shots especially when they have the size and length that Esky does,” Larson said.

“We missed 21 shots from inside the paint tonight and if you look at it, all of them were between five to seven feet out,” Larson said. “We got good looks we just have to be able to finish a few more. Same old story.”

Out of the timeout, it was Fedell’s turn for 3-pointers on back-to-back possessions as he got free after an offensive rebound for one and lost his defender in the corner for another to get the lead back up to 50-36 in the blink of an eye.

Both teams traded baskets until the end of the quarter, with Esky outscoring Menominee 7-6 in the last three minutes. In the fourth quarter, Menominee’s only points came from a pair of free throws from Dante Sartorelli as the Eskymos outscored Menominee 7-2 to get the final score.

Escanaba was very active defensively, deflecting 14 passes and stealing the ball 14 times as Menominee turned it over 20 times on the night.

“We always try to get our deflections and steals to equal 20 and tonight we had it at 28 and to me that tells a big story,” Hudson said. “We were getting in the passing lanes and trying to make things happen.”

Fedell led Esky with 23 points; Hudson had 11 and Maki scored 10. For Menominee, Badker led the way with 12 points (4-6 on 3-pointers); Monroe added 10 points and 10 rebounds and Bellisle and Starzynski had seven points.