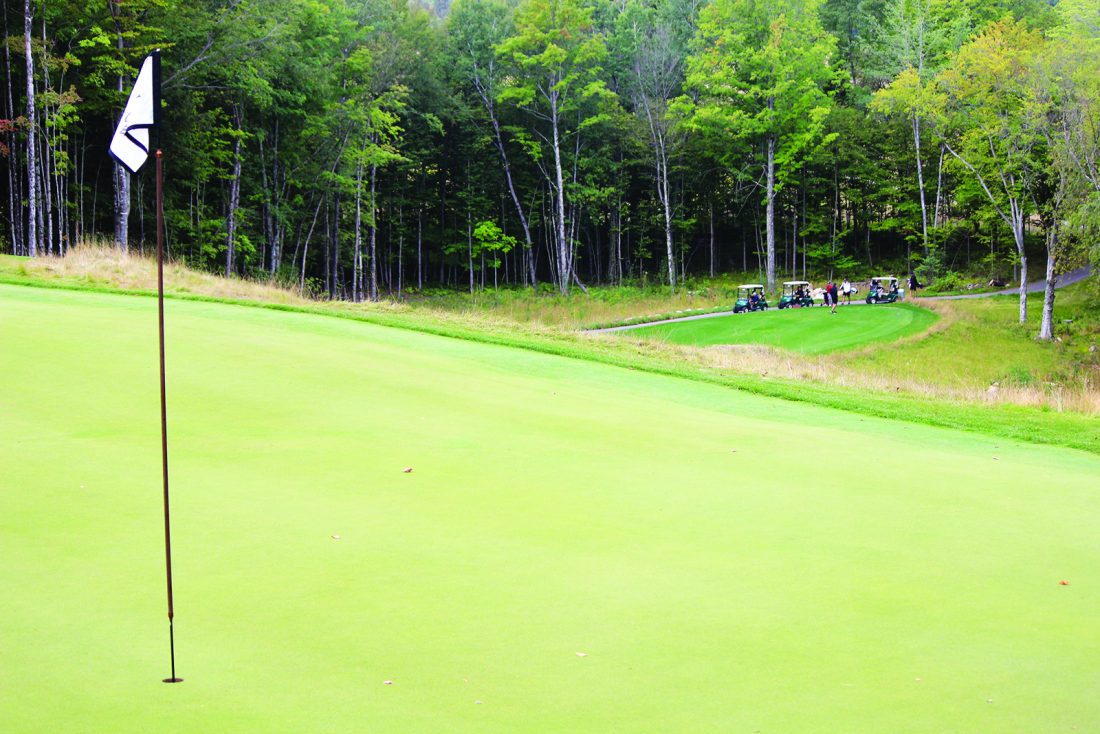 Dennis Grall photo The fifth green at Sage Run Golf Course displays the vast elevation changes at the course, which Golf Digest magazine ranks as the No. 4 best new course in the country in 2019. The tee box, with golf carts in the background, is about 170 yards beneath the green, which rises about 200 feet, making for an extremely difficult tee shot with rough and rocks on either side of the green.

ESCANABA — Sage Run Golf Course has only enjoyed two seasons of play, but it is already earning national recognition among some of the country’s top destinations.

The latest development of the Island Resort & Casino, Sage Run has been ranked fourth by Golf Digest magazine among the newest golf courses in the country. It is in pretty good company, to say the least, with architect Paul Albanese’s creation joining such highly renowned notables as designs by Bill Coore-Ben Crenshaw, Gil Hanse and Dana Fry.

Ozarks National Golf Club, a Coore-Crenshaw design near Branson, Mo., was selected No. 1 in the new public course category. That partnership also had the No. 1 new course in 2017, Sand Valley near Wisconsin Rapids, Wis.

No. 3 among the new public course rankings is Arcadia, Mich. Bluffs (South Course), designed by Fry as a companion to highly regarded Arcadia Bluffs.

Hanse, who designed the 2016 Olympic course in Rio de Janerio as well as the newest course at Streamsong, Fla., has the No. 1 new private layout, Ohoopee Match Club in Cobbtown, Ga.

“Those three are pretty big golf facilities. To be considered among them is a pretty sweet honor,” Island Resort & Casino director of golf Dave Douglas said of landing on that prestigious list.

Albanese also built Sweetgrass Golf Club, which is eight miles northeast of Sage Run and on the Island Resort & Casino complex. Sweetgrass, which opened in 2008, is among the top ranked courses in Michigan and is a links-style course that has hosted the Symetra Tour’s women’s professional tournament since 2011.

Sage Run, which had a soft opening in late 2018, hosted the 10-team Island Resort Collegiate men’s tournament Labor Day weekend. It is the complete opposite of Sweetgrass, featuring numerous elevation changes and is basically routed through heavily wooded terrain. The opening four holes are in a valley before golfers hit the elevated portion built along a drumlin, a glacial ridge that rises up to 200 feet.

It has been described as a “thrill ride for golfers” and Albanese said it has “a rough and tumble look with earth tones natural to that landscape.”

The remote location of the Upper Peninsula, which makes it tougher for course raters to make this a destination, may have reduced the attention of Sage Run. Douglas said this early recognition “will be a help, it will be a draw” for golfers who make it their mission to play the country’s premier courses.

He said Sweetgrass was ranked ninth when it debuted, which he said indicates Sage Run’s No. 4 notoriety is promising for future rankings. “I expect Sage Run to be ranked in the (state) top 10 (along with Sweetgrass),” he said. “As more people play it, it will be better perceived and it will be ranked higher than Sweetgrass.

“Sage Run is different. It is a nice complement to Sweetgrass. One of the raters told me (via email) he has done over 450 courses (such as consensus No. 1 Pine Valley) and he puts Sage Run in his top 10.”

In the Golf Digest article, one of the raters said “Sage Run is a breathtakingly beautiful course but was very difficult to evaluate. It has to be played a number of times before you have any idea where to go and what to do…Built to be rugged.”

Another rater wrote “a beast of a course that conjures visual comparisons to (former U.S. Open venue) Shinnecock. Wide variety of green complexes and a number of unique holes.”

The difficulty component at Sage Run is high, with some blind shots, the length of some holes and the extreme elevation changes a negative among casual to average level players. That concern was addressed late this summer when forward tee boxes were constructed on holes 5, 14 and 16.

“If it is too long (to play) and you have a par four over 400 yards, go up a tee or play a combination of tees (on various holes),” said Douglas, who agreed many higher handicap players, senior golfers or women prefer to play the most forward tee boxes. “Make it more playable (and fun),” he said. “The average golfer plays the wrong tees. Play the tees that fit your game.”

The course, as played during the college tournament, can reach 7,375 yards. But with five tee boxes, it can be as short as 5,231 yards.

Douglas said getting national recognition will be valuable in promoting the two courses and the casino complex. “You market that ranking and use that ranking to your advantage,” he said. “You get ranked by experts and they gave us a very favorable rating.”

Douglas pointed out the Upper Peninsula and Wisconsin is becoming a favored destination for the country’s huge golf population. “Look at all the new courses built within five hours of us, and they are all great courses,” he said.

“This is a sign there are a lot of great golf courses you can play (in the midwest),” Douglas said, indicating the more often golfers play Sage Run it becomes more playable and fun. “You have to learn the course a little bit,” he said of raising the enjoyment level.