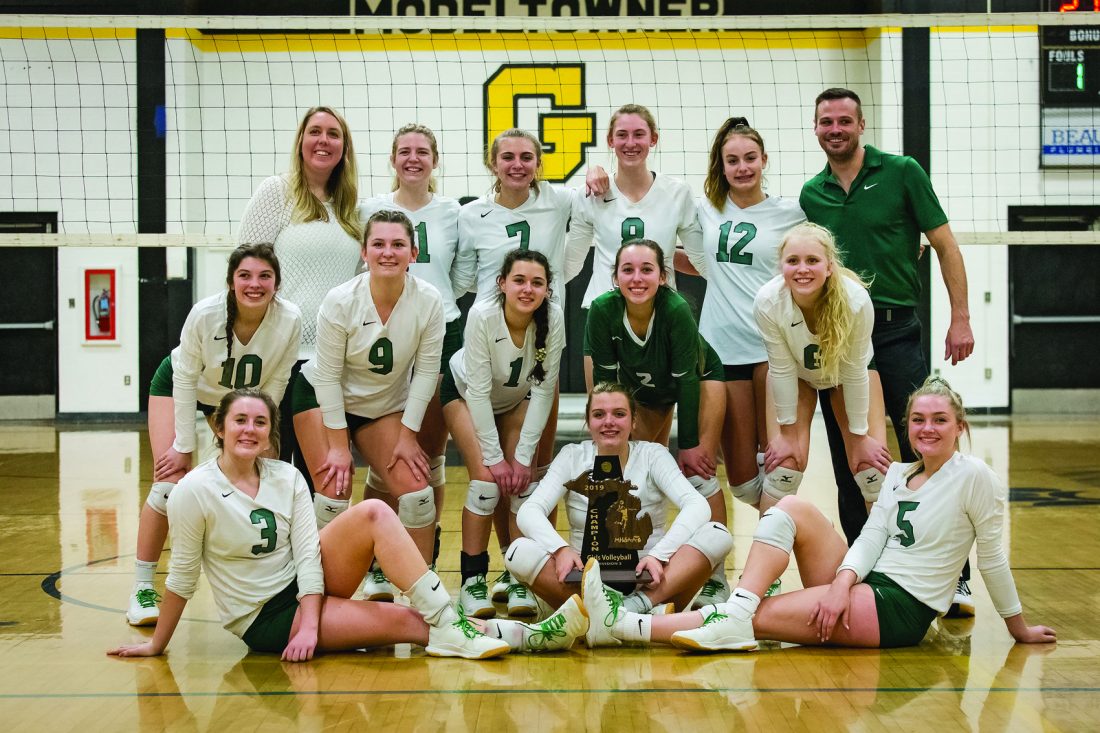 GWINN — The Model Town of Gwinn may not have gotten as much snow as other areas around Marquette County on Thursday, but there was definitely a flurry of activity going on inside the walls of the Gwinn High School gymnasium.

That’s because Thursday’s MHSAA Division 3 district championship volleyball match between the Modeltowners and visiting Manistique had almost everything a fan could ask for.

Powerful kills, exceptional extra effort to keep plays alive, furious rallies, the triumph of victory and the agony of defeat were all present amidst one of the loudest and most energetic volleyball crowds you could hear.

The crowd was a roughly 50-50 split, with the Emeralds bringing a fan bus and the Modeltowners’ faithful backing the home team as best as they possibly could.

The road team was the one that prevailed, however, with Manistique winning a four-set thriller to claim its second consecutive district title.

Manistique head coach Amy Nixon said she expected nothing less than a dogfight against a strong opponent.

“It was an amazing battle,” she said. “I knew Gwinn was going to bring a good game against us. It felt good to start strong with two (set) wins. We had a little bit of a rough patch in the third, but I’m so proud of them for pulling it together and answering back in the fourth set to finish it.”

The Modeltowners cruised in Set 3 to keep its season alive, going up 16-7. The Emeralds cut the lead to four, but Gwinn ended the set on a kill from junior Tianna Taylor to put her team on the board.

Nixon said the message to her team after the Set 3 setback was to simply get back to the basics.

“I just told them to calm down and play our game,” she said. “We let (Gwinn) try to change the tempo on us and we just had to remember what got us this far. We were just trying to play our own game.”

Tuesday’s regional semifinal between the Emeralds and Copper Kings will be a rematch of last year, a match Manistique prevailed in 3-1 before falling 3-0 to Traverse City St. Francis in the final. The Emeralds haven’t seen Calumet since then, but Nixon said her team will be ready.

“We played Calumet last year at this point,” Nixon said. “We’ve got some video on them already, so I think we’ll be well prepared for them.”

The unfortunate reality of playoff sports is that one team has to lose, and that was the reality for Gwinn.

Head coach Toni Roberts and her team held their heads high, however, with Roberts saying she was proud of the maximum effort her girls put out against one of the strongest teams in the Upper Peninsula.

“I’m incredibly proud of those girls, all 12 of them,” she said. “They’re awesome volleyball players, but they’re even better people. They’re such classy girls, they know how to graciously lose, they all sat on the bench after the game and every single girl clapped and was happy and proud of Manistique.

“That kind of stuff I can’t coach. The way that they did that, they’re just class acts and I’m so proud of them.

“Manistique absolutely earned it (tonight), there’s no question about that. That’s what I told the girls, too, there’s no problem with losing to a good team like that. Especially when they do it in such a style that they did. They fought hard, they worked, they went after every ball, they never quit and they’re such classy ladies. I’m just so incredibly proud.”

For six of Roberts’ 12 players, the match marked the end of their high school volleyball careers. Senior captains Megan Ruokolainen, Emily Curtice and Marissa Delmont, as well as Samantha Beisner, Analise Hoevker and Emily Mannor set foot on the court for the last time.

Curtice, who shared M-PC Co-Player of the Year with Manistique’s Smith, finished the night with nine kills and one ace offensively.

“They’re crazy, especially my three senior captains,” Roberts said. “They’re just absolutely unbelievable. They’re leaders of this program and they’ve just done so much for our entire volleyball program. They’ve done so much for the future with who’s already coming up (from junior varsity). They’re just great people, they care so much about their teammates and their school. They’re going to be so hard to replace, I can’t even put it into words.”

Manistique raced to a 9-2 lead in Set 1 before Gwinn pulled within two points via an ace from Elliina Miilu to make it 19-17.

The Emeralds called a timeout at that point, and earned the next four out of the timeout. The Modeltowners were able to make it 23-21 and 24-22, but Manistique clinched the set on a kill from junior Brooke Richey.

The Emeralds went up 4-0 in the second set and Gwinn was unable to recover. The Modeltowners did cut the lead to three at 20-17, but couldn’t completely overcome the deficit. The set ended on a Gwinn attack error.

After the Modeltowners’ triumph in Set 3 to stay alive, the fourth set was likely the craziest of the evening. Gwinn quickly fell into an 15-7 hole and it was time for the Modeltowners to chip away.

They did just that, making a furious rally and pulling within two at 19-17 on an ace from junior Halle Beauchamp. After the teams traded points to make it 20-18 Emeralds, Gwinn cut the lead to one on a double-hit violation, prompting a Manistique timeout.

The Emeralds answered that call with consecutive points, including a kill from Muth and a Gwinn attack error to make it 22-19.

Consecutive kills from Curtice and Taylor made the deficit just one again, but Manistique prevailed with the final three points, a kill from LaBar, a Modeltowners attack error, and a kill from McDaniel to clinch the set, match and district championship.

Taylor finished the night with 10 kills and one ace to lead Gwinn offensively. Following Curtice with her nine kills were Delmont and Beauchamp with six each. Delmont also had 23 assists while Beauchamp added three aces.

Delmont also put out a strong defensive performance with 14 digs, while Curtice had 13 and two solo blocks. Ruokolainen added 11 digs while Taylor and Miilu each had nine.

Calumet topped Ironwood in straight sets in its district final, setting the stage for Tuesday night in Escanaba.