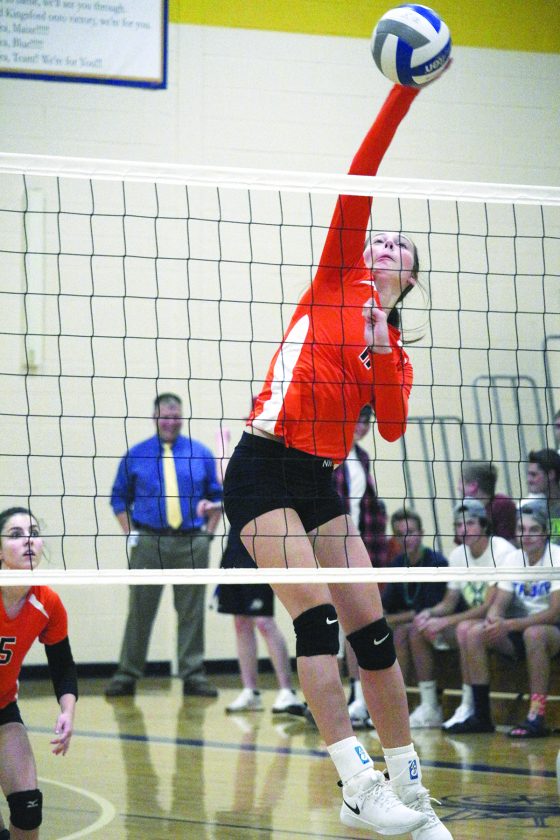 Libero Jalin Olson added a match-best 31 digs, as the Eskymos rallied from behind late in the third set to seize control of the game.

The Flivvers, led by Ali Doolittle’s 15 kills, dominated the first set but struggled to find holes on other side of the net as the match progressed.

“It was a fun match to play in,” Flivvers head coach Jaclynn Kreider said.

“Defensively, Escanaba was incredible. It was hard for us to get the ball on the floor. We had our share of errors, but their defense was phenomenal. Their libero really is a great leader and a great player. She doesn’t let it hit the floor.”

After rolling in the first set, Kingsford fell behind 7-2 early in the second. The Flivvers managed to squeeze the deficit to one at 8-7 but could never get any closer.

Set three went back and forth early, but the Flivvers pulled ahead midway through. Kills by Doolittle, a block from Kate Cook and aces from Cook and Katherine Erickson helped Kingsford to a six-point advantage on multiple occasions.

The Flivvers led 23-17 after a couple of long balls by the Eskymos and seemed on their way to the set win. But Kamin had other ideas, coming through with a solo block and a handful of kills as Escanaba charged back.

Escanaba never trailed in the final set, but it was tight throughout with Kingsford tying the score five times, including as late as 15-15. But from there it was all Kamin, as she tallied six kills during an 8-3 run that pushed the margin to 23-18. Dolittle slammed a point, and Cook come through with a block and a tip as the Flivvers attempted a late comeback of their own, but a couple of unforced errors helped seal the victory for the visitors.

“It was an awesome win for us,” Lambert said. “Kingsford is always challenging. It was our first real competitive challenge for this year. The girls had to bring it. Kingsford showed us in the first game. They’re here to play.

“Kingsford is a really good team, They’re well coached. I’d come play against them every day.”

The Flivvers dropped to 1-1 in league play.

“Once they were able to run their offense with Nicole, it got difficult for us,” Kreider said. “We have to adjust. She’s athletic and a smart player.

“Not to take anything away from them, but our girls have to do a better job attacking, so that they can’t run their offense.”

“We’ve got a lot of players that are dangerous and you saw moments of each of those players tonight,” Kreider said. ” So if we can continue to feed off the strengths we have and work together, we can do a lot of great things. I’m not concerned. I wish we would have won, but it’s fun to play conference matches like that. There’s a lot we can learn from that, which is what it’s all about.”