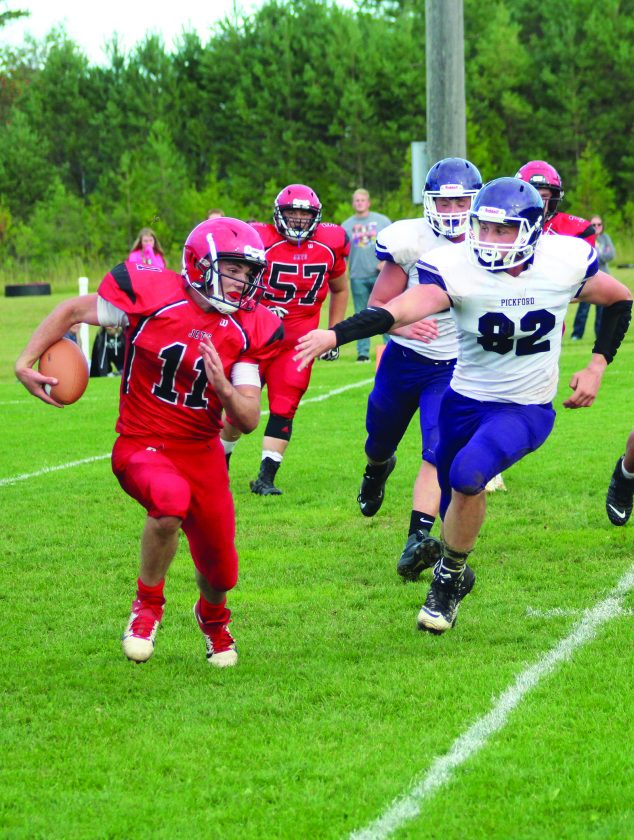 Matt “Sweets” McCarthy | Iron Mountain Daily News North Central’s Luke Gorzinski (11) busts a run to the outside while being chased by Pickford’s Luke Batho (82) during Saturday’s game at Powers. Looking on for the Jets is Owen Chartier (57).

The third-ranked Jets forced seven turnovers, including six interceptions and a fumble in this Great Lakes Eight crossover contest.

“Our whole defense was great,” said Jets’ coach Leo Gorzinski. “Leo made the plays and the other guys played their roles. “

The Jets (3-0) paid close attention to Pickford senior QB Jim Storey, who completed just 4-of-12 passes for 95 yards and five interceptions and ran 22 times for 93.

“We were able to contain him with our speed,” said Noah Gorzinski. “Credit to Leo Gorzinski. He was awesome the whole game. This was a real tough game. This is a big confidence builder, knowing they’re the No. 1 team. They’re very good.”

“We knew they were going to him,” said Noah. “I just used my athletic ability to go up and get the ball.”

North Central appeared ready to put this one away when Leo Gorzinski got an interception at the Pickford 38-yard line. The Jets, however, were unable to move the ball, giving the Panthers one more chance with 55 seconds left to play and setting the stage for Noah’s interception.

“This was a battle of two great teams,” said coach Gorzinski. “Neither team deserved to lose. On film we saw if we could stop the run, they would go deep. We really like the win, but it’s still early in the season. There’s still a long way to go. Last year, we won big at Forest Park, then they came here and beat us in the playoffs. They (Pickford) have Edington back this year and he’s only going to get better.

“I appreciate the fact the kids had to go the distance today, but we made a lot of mistakes. We had some penalties that stopped drives and dropped three passes in the end zone.”

North Central tied the game on Timblin’s three-yard run up the middle with 9:06 left in the second quarter.

The Jets took a 14-6 lead on Noah Gorzinski’s keeper up the middle with 8:39 remaining in the third and made it 20-6 on Luke Gorzinski’s five-yard run through the middle at 4:18.

Early in the fourth, Storey bulled his way through the middle for a six-yard TD, trimming Pickford’s deficit to 20-14.

North Central then missed an excellent scoring chance when it reached the Pickford one.

The Panthers’ defense stiffened, forcing the Jets to turn the ball over on downs at the six just two plays later.

North Central, however, didn’t allow the Panthers to gain favorable field position through the remainder of the contest.

“They did a great job keeping us off balance and in long yardage situations,” said Panthers’ coach Josh Rader. “They were getting to the ball and made it difficult for us to move the ball. We had way too many turnovers. Anytime you play against a great team, you can’t turn it over seven times and expect to win.”

The Jets outgained Pickford 387-303 in total offense. Noah and Luke Gorzinski combined for 14-of-21 passing and 221 yards. Five of their aerials went to Timblin for 103. Luke Gorzinski caught four passes for 83. Luke rushed for 78 yards on eight carries and Noah had 62 in 21 attempts.

“Between No. 7 and 11 they have two good quarterbacks, which changed our dynamics on defense,” said Rader. “We have to get better.”

LaMothe rushed 10 times for 89 yards and Edington snagged a 56-yard pass on the North Central four, setting up the Panthers’ first score.