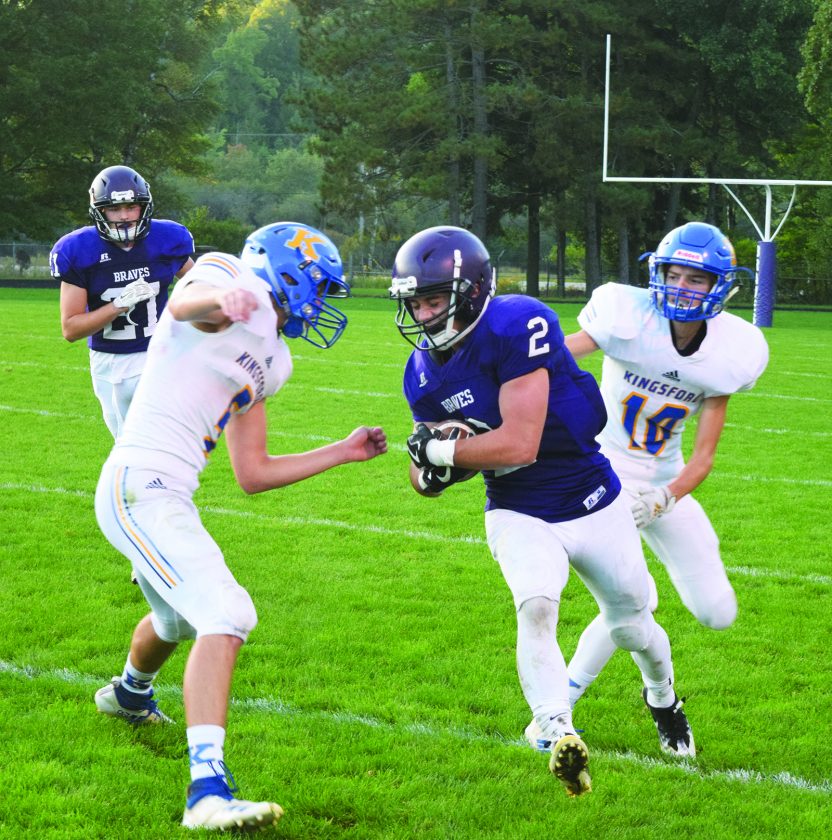 Kingsford’s first touchdown was the telling moment of the game.

The Flivvers (2-2, 1-0 GNC) entered the red zone with less than four minutes gone in the first quarter. A personal foul moved them back to the Gladstone 20, but they were able to fight back to the Gladstone one-yard line. A one-yard rush by quarterback Tyler Kopp scored the first TD, and it would be the fourth quarter before any more points hit the board.

Where Kingsford was able to press through, the Braves found themselves stymied by penalties and mental errors that left them unable to convert. Gladstone racked up 85 yards in penalties over the course of the game.

“We definitely beat ourselves, there’s no doubt,” Braves’ coach Jeff Hansen said. “I’m not taking anything away from Kingsford. Their kids made plays down the field and ours didn’t. It comes down to that.”

In the first quarter, the Braves (2-2, 0-2 GNC) had an opportunity to tie it up, sitting on the Kingsford 10-yard line, but an incompletion turned the ball over on downs.

Gladstone and Kingsford’s defenses were the main stars throughout the game, but the second half made it more apparent as the Flivvers kept the Braves out of the end zone despite threatening three times during the third quarter.

“Our defense played tremendously,” Flivvers’ coach Mark Novara said. “Last week we got beat up, and I think they answered tonight. It was just an overall great effort by that unit.

“Our defense overall played well. Obviously, that was the difference in the game.”

Turnovers were Gladstone’s undoing in the second half, giving up the ball on a kick return mistake, an interception and two fumbles.

The second touchdown of the game came just over one minute into the fourth as the Flivvers made good use of a fumble recovery that put them on the Gladstone 23.

Kingsford’s Logan Normand soon made it into the end zone on a three-yard rush, and a failed two-point conversion made it 12-0.

The Gladstone offense found itself on shaky ground, eventually misplaying a pass that was intercepted by the Flivvers’ Carter Stanchina on the Braves’ 21.

“I thought our defense played their tails off and really kept us in this game,” Hansen said. “They played well and kept putting our offense in good position, but we kept shooting ourselves in the foot.”

Kingsford turned the turnover into a TD, despite penalties that pushed them back to the Gladstone 21. Kopp delivered a 21-yard pass to Chris Carollo with 5:45 left in the fourth quarter, and a successful two-point conversion put the Flivvers up 20-0.

The Braves found their stride in the last minutes of the game after moving to a hurry-up offense. Gladstone moved down the field on the back of quarterback Drake Forrest, culminating in a six-yard TD pass to Caden Alworden.

The Flivvers were led by Carter Kreski, who accumulated 36 yards on nine carries and 20 yards on four receptions. Hunter Bilgreen notched 35 yards on two receptions with one TD, and Carollo also collected 21-yard TD. Kopp went 7-for-16 for 51 yards, one passing TD and one rushing TD. Logan Normand finished with 24 yards on 13 carries and one TD.