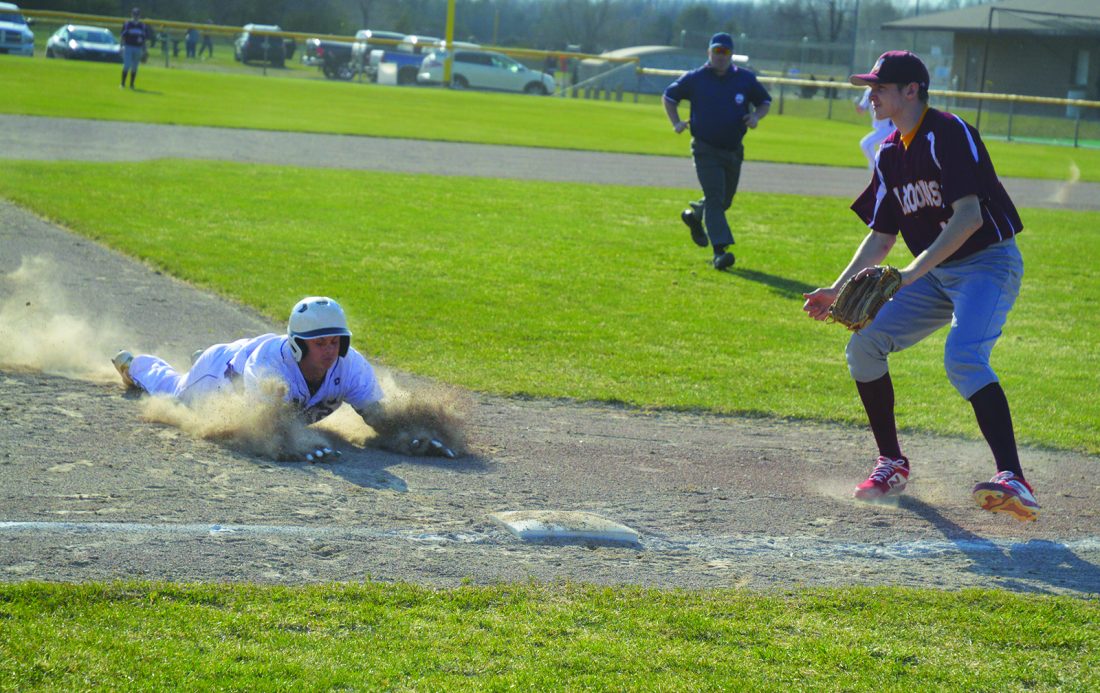 Austin Hemmingson | Daily Press Gladstone’s Caden Alworden slides into third base in front of Menominee’s Keagan Monroe during the second game of Tuesday’s doubleheader at Gladstone.

GLADSTONE — The Gladstone baseball team didn’t waste any time disposing of Menominee here Tuesday evening, mercying the Maroons 13-3 in the second game of a doubleheader. The Braves also rallied for a 4-2 win in the opener.

In the nightcap, three straight RBI singles by Cooper Cavadeas, Ian Schwalbach and Jared Crow quickly gave the Braves a 3-0 lead in the bottom of the first inning.

After being held scoreless in the second, they erupted for 10 runs in the third to put the game well out of reach. They started the inning by loading the bases with nobody out, chasing Menominee pitcher Hunter Goldschmidt.

The Maroons (0-5) brought in Owen Calhoun, who got Schwalbach to hit a ground ball to third base, but a fielding error by Carter Berger allowed a run to score. After Crow dropped down a sacrifice bunt for another run, the Maroons intentionally walked Cody Frappier to reload the bases. Drake Forrest took advantage with a two-run single to center to make it 7-0, and two batters later Hanson delivered a two-run single to push the lead to 9-0. Shea delivered another two-run single to make it 11-0, and the Braves (17-6) tacked on two more on a hit-by-pitch and a walk with the bases loaded.

“You can only hold these guys without hits for so long,” Maroons’ coach John Beyer said. “In the first game, we did a pretty good job not allowing back-to-back hits. In the second game, our pitcher struggled a little bit and ended up with several back-to-back hits, a couple walks, and then an error here and there. It keeps the pitchers on the field for too long.”

The Maroons scored three runs in the top of the fourth, but the game was called before the bottom half due to the 10-run mercy rule.

“We settled down after that first game,” Braves’ coach Kelly Shea said. “I don’t know if we were tight, or if we just weren’t it. We might have had a hangover from that Escanaba game (Monday), and then we mercied Menominee the first time we played them so they might have thought it was going to be a cakewalk.”

Hanson, Shea and Cavadeas all had two hits. Crow had three RBIs while Hanson, Shea, Schwalbach and Forrest all added two. Cavadeas and Frappier had one each.

The opener was tied at two heading to the bottom of the fifth, but Christian Creten’s two-run single gave the Braves a 4-2 win.

Hanson and Frappier each had two hits, while Schwalbach and Riley Baldovski had one RBI apiece. Baldovski earned the win, surrendering two runs (zero earned) on one hit while walking and fanning one.

Coach Shea was happy with the outings from Alworden and Baldovski.

“We just make sure they don’t walk anybody. They’ve got a great team behind them, and I just want those two to throw strikes, and that’s what they did,” he said. “They’re really good at hitting their spots, and they did that again today. Our pitching was top-notch again.”

Keagan Monroe took the loss for the Maroons after a solid outing, surrendering four runs (two earned) on eight hits while walking two and striking out one over five innings.

“He’s usually good for four or five innings. He had pretty good control tonight so he was able to go the distance,” Beyer said. “That’s more than we usually ask of the kids, but he was doing it so we just let him run with it.”

Keaton Uecke had the lone hit for the Maroons, who host Escanaba for a single game Thursday. Gladstone visits Negaunee for a twinbill today at 4.