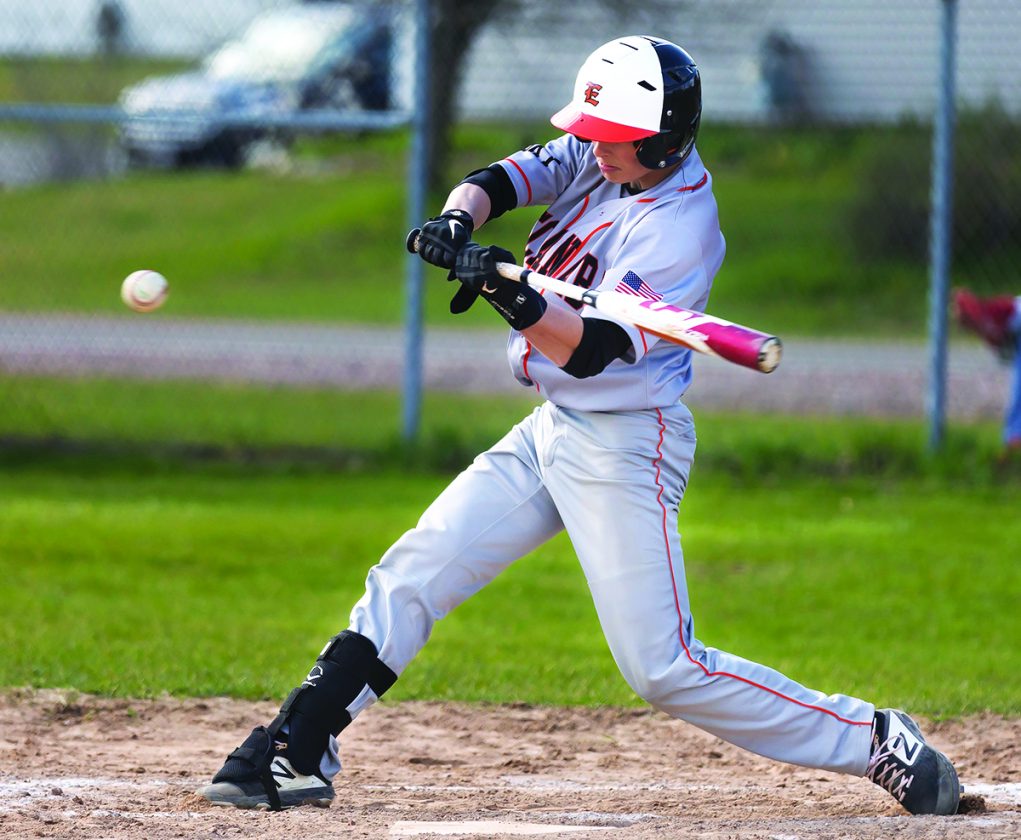 QUINNESEC — If it wasn’t for Andrew Paupore, it might have been a complete day to forget for Kingsford.

Paupore’s gem on the mound in the first game helped Kingsford hold on to a doubleheader split with Escanaba on Tuesday.

Paupore threw a complete game, giving up three hits with no walks and seven strikeouts in Kingsford’s 5-1 win.

“Andrew just pitched a gem,” Kingsford head coach Chad Lindeman said. “He came in, he battled, changed speeds. He did a really good job. I can’t commend him enough on that.”

But Escanaba got the bats going early and often in a 13-0 rout in the nightcap.

Kingsford scored all five runs with three hits in the first inning of the first game. Escanaba also made two errors.

And Paupore was dealing. Through the first four innings, the Eskymos managed just three base runners, including two that reached base by errors. Paupore had four strikeouts through four frames.

Escanaba got its other two hits and a run in the sixth inning after Paupore struck out two more in the fifth.

“First game, I thought Paupore pitched awesome for them — had us off-balance the whole time,” Escanaba head coach Scott Hanson said. “I think we adjusted later in the game but it was too little, too late for us. Hats off to him.”

Austin Willette pitched for Escanaba and gave up five hits and no walks with two strikeouts.

The second game was a different story.

Escanaba scored four runs in the first inning and added three in the second and two in the third.

Hanson said it wasn’t hard for his team to maintain focus with a comfortable lead.

“I think we have a lot of depth. I told the kids before the second game that just because you’re sitting doesn’t mean you’re not getting in,” Hanson said. “It gave us an opportunity to get some kids in. They’re trying to get an opportunity to prove to me they can play. It’s easier than you think because they’re trying to show what they can do at that point. It was good baseball for our kids. I was happy with how we played.”

The Flivvers made seven errors in the nightcap and managed just one hit, a third inning single through the middle of the infield by Nic Saari.

Lindeman said it can be hard to find consistency with the bench coming in for the nightcaps.

“That’s part of it. We’re unable to have a JV program at this point,” Lindeman said.

“You want to get those younger kids reps in the field. That’s just the way the second game goes sometimes. It doesn’t hurt us to get the younger kids in the game.”

Drew Rodman pitched for the Eskymos and gave up the lone hit with a walk and two strikeouts.

Carter Kreski and Nolan LaVarnway pitched for Kingsford and gave up 13 hits with a walk and three strikeouts.