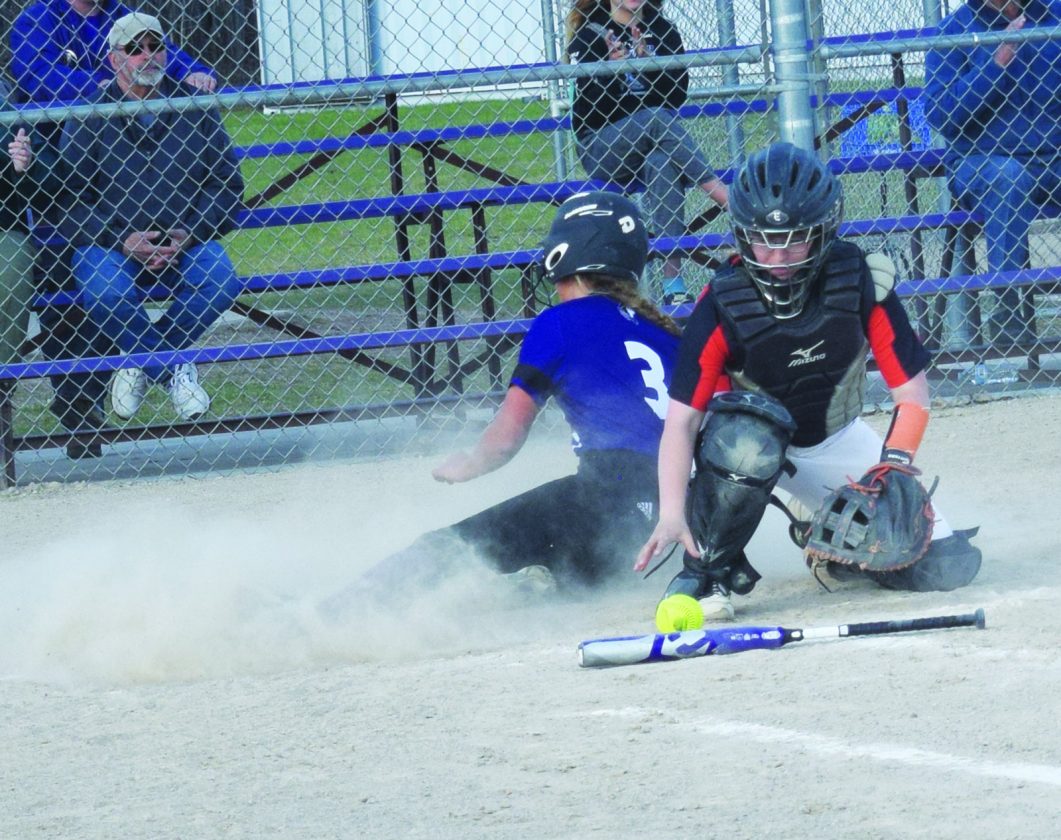 In the second game, the Eskymos led 4-0 going into the bottom of the third. The Braves coupled together a few hits but were unable to capitalize. Andie Balenger started Gladstone off with a ground single, and Marnnea LaFave doubled with a fly to right field to move Balenger to third. With Taylor Trudeau up to bat, Balenger got stuck between home and third and was tagged out to prevent a Braves’ run.

With LaFave and Trudeau on base, Jenna Tardiff singled to load the bases. After a flyout, the Braves scored their first run when Taelor Zeise was hit by a pitch to score LaFave. Morgan Letteriello was up next and cranked a line drive to right field to score two runners and cut their deficit to 4-3. Then, Zeise scored on a fly ball to center from Natalie Hansen to tie the game at four.

With the game tied, the Eskymos (16-2) collected the final out. Esky then loaded the bases with one out in the fourth. Lexi Chaillier was up to bat and knocked one over the fence on the wrong side of the foul line due, in part, to the gusty wind conditions on the field. She ended up popping out and the game was still tied at the end of the frame.

The bottom of the fourth started out with a walk for the Braves (22-4). Trudeau doubled as she drove a hard shot along the first base line to drive in a run. After a strikeout, another double from Sydney Herioux scored Trudeau to put Gladstone ahead 6-4. Herioux was able to sneak in on a wild pitch to put the Braves ahead 7-4 at the end of the inning.

“Defensively, our girls pulled through,” Braves’ coach Darin Hunter said. “We had a little bit of a defensive lapse in that first inning — after that we played solid. They played solid defense. We had girls diving all over the place to get to the ball. There was that true spirit of Gladstone softball, especially with this rivalry between Gladstone and Escanaba. It’s nice to see we broke their winning streak against us. It was a great game.”

The Eskymos managed one more run on a double to center from Heather Bergstrom that scored Georgia Lehto, but were unable to answer as Gladstone tacked on one more in the bottom of the sixth.

“We expect a lot out of our girls,” Hunter said. “We prepare all season long and in the preseason. The Gladstone softball mentality is that you never give up. You play until the end. We expect them to be able to come back in situations like this. I was glad to see that they were able to do that, and that they had the versatility to really play through and get the victory.”

Escanaba’s early lead was thank to three runs in the first and one in the second.

“We had a couple plays on the field that we normally make,” Esky coach Gary Salo said. “We just made a couple adjustments on defense to give an opportunity here or there, and it’s something the kids will learn from. We always get better every time we play. Our kids didn’t quit. They fought to the end, which is good. You go out and play, and you get your opportunity again next week. That’s the good news with that.”

Andie Balenger earned the win for the Braves. She allowed three runs on nine hits, walked three and struck out five. Letteriello finished with two RBIs and Trudeau, Tardiff, Zeise, Hansen and Herioux all finished with one RBI.

Nicole Kamin took the loss for the Eskymos over 3 2/3 innings. She allowed eight hits, seven runs and two walks. Gabi Salo pitched the remainder in relief, giving up one hit, one run and striking out six. Chaillier finished with two RBIs, and Kamin and Bergstrom both finished with one RBI.

“Nicole (Kamin) toughed it out,” coach Salo said. “We could’ve played better defense to back her up. If we play the way we’re capable of playing, we’ll be able to limit the runs.”

In the first game, Escanaba took an early lead and kept the Braves off the board thanks to a no-hitter from Gabi Salo.

“We played very clean in the first game,” coach Salo said. “It was a solid game. We limited their opportunities on the bases.”

Salo earned the win for Esky, giving up no hits and just one walk. Salo, Kamin and Jalin Olson all collected one RBI.

Andie Balenger took the loss for the Braves.

Before the game, the Braves honored Jerry “Smitty” Smith, their former coach who passed away in 2016. Smith led the Braves to two state championships in 2004 and 2009. Gladstone also took a moment during the intermission between games to honor its seniors and celebrate Parent’s Night.

Gladstone travels to Menominee for a single game today at 5, while Esky hosts Menominee in a doubleheader Thursday.