Rockets have a blast at Dome 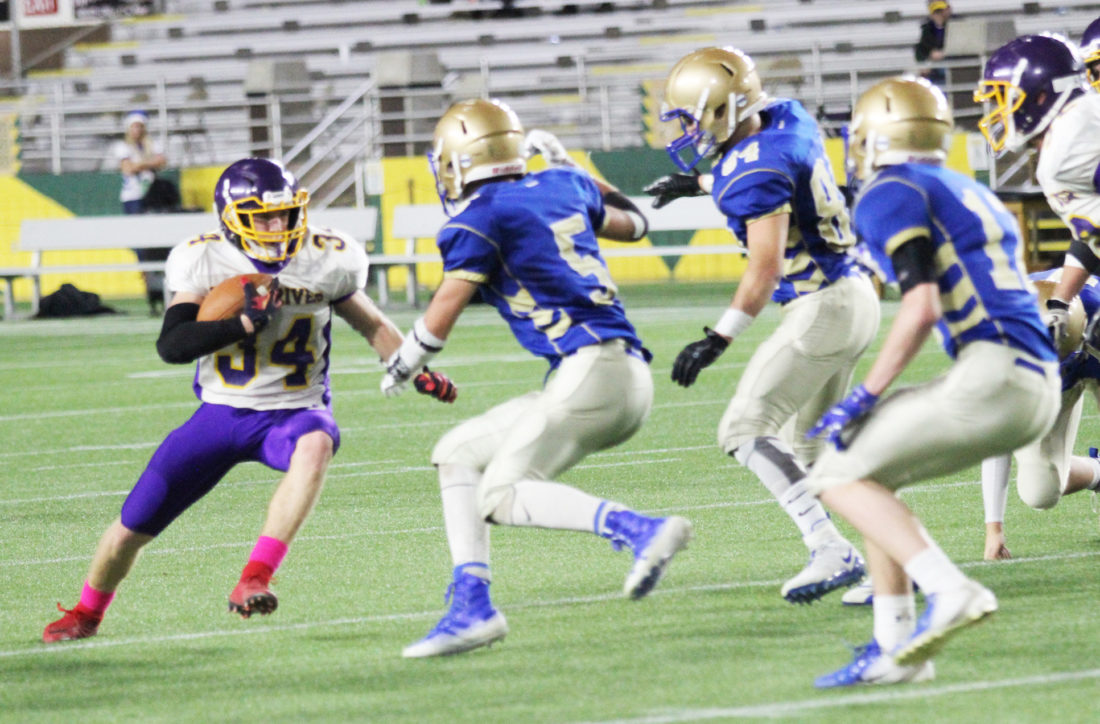 MARQUETTE — For the first time in school history, Rapid River is a state champion.

The Rockets knocked off Onekama 30-18 in an eight-player Division 2 state championship game here Saturday in the Superior Dome behind a dominant rushing attack from Gunner Larson and Tyler Sundling.

“That (rushing attack) was our game plan coming in,” Rockets’ coach Steve Ostrenga said. “We trapped them and ran the dive.”

The Rockets jumped ahead 8-0 on a 22-yard touchdown run by Sundling with 1:09 left in the first quarter. Quarterback Brent Lundquist pitched it to Sundling going right, who found a cutback lane to the left and ran into the end zone untouched.

“They (Portagers) were playing off to cover the pass,” Sundling said. “Coming in, we knew we had to punch them in the mouth.”

Onekama responded with a 59-yard touchdown pass from Luke Mauntler to Ryan Clarke early in the second quarter to cut the deficit to two after a failed two-point conversion.

The Rockets then struck on a 14-yard pass from Lundquist to Nate Olson with two minutes remaining in the first half to take a 16-6 lead into halftime.

“I thought Brent (Lundquist) controlled the game and was very efficient,” Ostrenga said.

Rapid River came out of halftime with the same game plan, pounding it down the middle with Larson. The Rockets ate up four minutes of the clock on their first drive of the half, with Larson finishing it off on a five-yard TD run up the middle to extend their lead to 22-6.

Larson echoed the comments from Sundling.

“We knew their weakness was stopping the run up the middle,” Larson said. “We knew we had to hit them hard and our offensive line did a tremendous job blocking.”

The Portagers made it interesting in the fourth quarter when running back Ben Acton scored on a 24-yard TD run with 11:21 left in the game to pull within 10.

On the ensuing kickoff, the Portagers tried an onside kick, dribbling it just past midfield and recovered it as the Rockets backed off. However, that drive fizzled out quickly when Mauntler fumbled the snap on 3rd-and-14 from the Rockets’ 45, when the snap bounced high in the air. The Rockets recovered and shortly after Sundling found the end zone again from 22 yards out to put the game out of reach at 30-12 with 5:04 remaining.

“Things got a little scary there with the onside kick,” Ostrenga said. “I was glad we were able to control the ball after that.”

The Portagers had one last gasp when Mauntler threw deep down the right sideline and found Wade Sedlar for a 55-yard touchdown to make it 30-18 with 3:55 left.

However, the ensuing Onekama kickoff went out of bounds and Larson ripped off a seven-yard run on 4th-and-three from the Portagers’ 47-yard line with 1:38 left to ice the victory.

“Our lines dominated on both sides,” Ostrenga said. “I thought our kickoff team made big plays, it was just a complete team effort.”

The Rockets atoned for championship game losses in 2011 and 2013 by beating Onekama.

“First of all, congratulations to those guys (Portagers) for getting here,” Ostrenga said. “(As for us), it means everything. It really shows that hard work is all you can bring to the table. And when you work hard, sometimes good things happen.

“We’re very blessed. I am so thankful for the kids and the hard work they put in and I can’t say enough about our coaching staff.”

Rockets’ players had similar thoughts on what it means to be a state champion.

“It’s crazy,” Lundquist said. “It’s a dream of mine to get here. Give credit to our offensive line today.”

Olson, who was a hero in playoff games against Forest Park and Cedarville, chimed in as well.

“It was a little more of a relief to not be playing in a one-possession game today like we were the last three weeks,” he said. “I couldn’t ask for anything more for my senior year.”

Larson and Sundling both said it means everything to them and that they’re blessed.

On the other side, it was a tough ending for a Portagers team who played in their first state championship game.

“It was a close, hard-fought game,” Portagers’ coach John Neph said. “The guys on both sides played hard.

“I think the running game for Rapid River was a huge difference. We haven’t given up that many yards and points all season. They were very talented.”

Larson led the Rockets with 123 yards rushing on 23 carries and a TD. Sundling carried 25 times for 120 yards and two scores, while Olson chipped in with 26 yards on four carries. Olson also caught two passes for 22 yards and a score.

Lundquist finished 5-9 passing for 61 yards and a TD.

Acton led the Portagers with 78 yards rushing on 18 carries and a TD. He also caught two passes for nine yards.