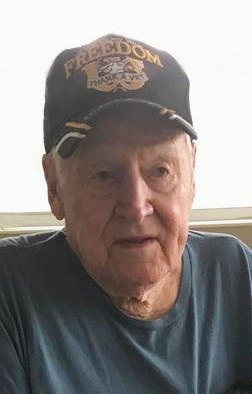 ENSIGN — Lloyd R. Brannstrom, 86, of Rapid River (Ensign), passed away Thursday morning, July 23, 2020, at the D.J. Jacobetti Home for Veterans in Marquette. He was born on Sept. 27, 1933, in Ensign, Mich., the son of Carl and Estella (Lamberg) Brannstrom. Lloyd grew up on the family farm in Ensign and attended school in Rapid River where he graduated from high school in 1951. He went on to serve his country in the U.S. Army from 1955 until he was honorably discharged in 1957. After returning, Lloyd moved to Chicago where he worked putting in concrete foundations for new homes in the area. After his father passed away in 1959, he moved back to Ensign to run the family farm. On April 8, 1961, Lloyd married the former LaVerne V. Karasti at Calvary Lutheran Church in Rapid River and she preceded him in death on Oct. 2, 2016. Together, the couple shared 55 years of marriage and raised four sons, Kent, Kurt, Karl, and Kraig. In 1969, Lloyd relocated his family to Saline, Mich., where he worked at Stark Tool Company for a few years before returning to Ensign in 1971. He then was employed for Harnischfeger Corporation in Escanaba as a foreman until it closed in the early 1980s. During this time, he also owned Massy Ferguson Tractor and Snowmobile Dealership – Ski Wiz. Lloyd went on to work as a millwright with Carpenter’s Union Local 1510 until his retirement in 1997. He was a complete handyman and was considered a “jack of all trades, master of none.” Lloyd was involved in many endeavors, enjoyed working on machinery, and traveling. Lloyd loved the outdoors, was an avid hunter, helped to make and weld gates for the Forest Service, and also cared for various camps in the area doing maintenance. His family was very important to him and he greatly enjoyed spending time with them. Lloyd was a member of Calvary Lutheran Church in Rapid River, the Rapid River Lions Club, the Rapid River American Legion Post 301, and the Brotherhood of Carpenters Union Local 1510.

In addition to his parents and wife, Lloyd was preceded in death by two sons, Karl and Kraig Brannstrom.