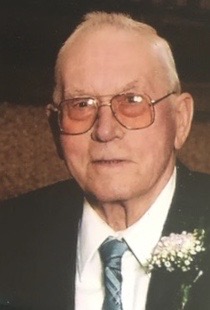 Roy was born on July 28, 1928, at Isabella, Mich., to Jacob and Margaret (Lang) Landis. He was the youngest of three children. He often remarked that growing up on a family farm sheltered him from the Great Depression because they were self-sufficient. He attended elementary school at the Aspen School at Isabella and high school at Nahma.

One of his first jobs aside from working on the farm was making wooden boxes at a factory in Ensign. In August 1947, he began working on a section gang for the Soo Line Railroad. Roy served in the Michigan National Guard, Co. C, based in Escanaba from 1948-1951 attaining the rank of corporal.

On Sept. 24, 1949, Roy married the love of his life, Jessie Jeanette Weigandt. They were very devoted to each other and were married for over 67 years before Jessie passed in 2017. They raised three children: Allan, Laurie, and Bryan. Roy and Jessie made their first home in a cabin at Nahma Junction, Mich., before purchasing and moving that cabin to Cooks. As the family grew, they planned, and Roy built additions to that cabin including a hand-dug basement. In 1967 he proudly realized his dream of designing and building his red barn.

Roy’s phenomenal mechanical aptitude blossomed when he answered a magazine advertisement for a diesel mechanics correspondence course. After completing the coursework, he attended hands-on training at Utilities Engineering Institute in Chicago, Ill., in 1955. This training advanced him from section worker to bulldozer operator for the Soo Line. He maintained the right-of-way from Sault Ste. Marie, Mich., to St. Paul, Minn., and from L’anse, Mich., to Schiller Park, Ill. His job required three train cars: a living/bunk car, a supply car, and a flat car for the bulldozer and scraper.

He loved his job, but it meant separation from his family during the week. So for a few weeks each summer, his family would join him and stay in the living/bunk car. It became a family adventure. Roy retired from the Soo Line in 1987 with 40 years of service.

Following his retirement, Roy was able to pursue his hobbies of metal detecting, “junking”, stamp and coin collecting, and visiting casinos and traveling with Jessie. He raised gladiolus and was proud of the ribbons he won for them at the Schoolcraft County Fair. He also shared his glads with friends and neighbors and made sure the Congregational Church altar was adorned with them during late summer. He had planted this year’s glads in late May when his health was beginning to fail.

Another high point in Roy’s life was the Gas and Steam Engine Show in Escanaba. He looked forward to attending it with his son, grandsons, and son-in-law. He did not miss one year.

Roy was the original recycler. He repurposed and reused items that others would have thrown away. If he didn’t have a tool for a job, he invented one; if he didn’t have a part he needed to mend a machine, he fabricated one. Roy never saw problems: he only saw solutions. He especially liked designing and creating scale models.

He was not an eloquent speaker and was always referred to as “a man of few words.” His actions more than made up for his shyness and what he didn’t express orally. He was a kind, generous, patient, gentle man who was always ready to lend a hand. He served on the Schoolcraft County Board and also on the Inwood Township Board for 10 years. He was a faithful member of the Cooks Congregational Church and served as a deacon, a parish council member, and building caretaker beginning in 1952. He was a safe driver and was proud of the fact that he was able to retain his driver’s license past age 90. He made the decision in June to discontinue driving because he felt he couldn’t do it safely anymore. He was a proud lifetime union member in the Brotherhood of Maintenance of Way Employees.

Roy loved his family and looked forward to family gatherings. He often quoted a long-time Soo Line friend, Vern Houghton, who said, “Your family is your strength.” On a surreal note, as Roy passed from this world to his Heavenly home, the train passed through Cooks and sounded its horn. A fitting tribute.

Roy’s family would like to take this opportunity to thank his many caregivers including Dr. Ash and the home care nurses who very compassionately attended to his needs. We would also like to thank the many community and church family members who visited him and brought him meals and treats. The outpouring of love has been a tremendous support for the family as we moved through this difficult time.

The family has planned a private graveside service. Burial will be in the Inwood Township Cemetery at Cooks. In lieu of flowers, memorials may be directed to Cooks Congregational Church, Cooks, Mich. The Fausett Family Funeral Homes, Manistique, is assisting the family with arrangements. Messages of condolence may be directed to Fausettfh.com.