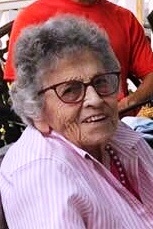 HERMANSVILLE — Violet M. Haelterman, 98, found peace on May 29, 2020. She was born in Hermansville, Mich., the fifth of ten children, to Alex and Jennie (Paquin) Raiche. She attended Hermansville schools and Chicago Nursing School. She was a World War II veteran, serving in France. She married Edward Haelterman, also of Hermansville, on Aug. 10, 1946. They made their home in Lansing, Mich., and then, West Lafayette, Ind., while Ed went to school. He later taught at Purdue University and preceded Violet in death on Jan. 9, 2005. In 2016, Violet relocated to Green Bay to be closer to family.

Visitation with social distancing will be held at St. John Neumann Catholic Church in Hermansville on Saturday, June 6, from 10 a.m. until time of Mass of Christian Burial at 11 a.m. with Father Jacek Wtyklo officiating. Burial will follow in Meyer Township Cemetery. Anderson Diehm Funeral Home, Stephenson, Mich., is assisting the family with arrangements.