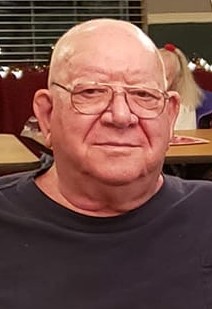 Bob served active duty for six months in the Army Reserve in 1955.

Bob had worked for Michigan White Cedar (post yard), Meiers Signs, and then in 1965 began his career at Mead Paper Company, retiring as a super-calendar operator in March of 2001.

He was a member of St. Anne’s Church, YMCA and the Mead Sportsman Association.

Bob loved spending time at camp with his son Bill and going swimming at the YMCA. He was a farrier by trade and he had a love of shoeing and trimming horses. Bob was an avid Detroit Tiger and Lions fan.

He is survived by his daughter, Denise of Green Bay, Wis.; son, William “Bill” (Becky) Arkens of Escanaba; and many nieces and nephews.

In addition to his parents and wife, Marilyn; Bob was preceded in death by his stepfather, Henry Bonjean; siblings, Joseph, George, Harvey, Richard Arkens and Mary Fox; and father and mother in law, Raymond and Josephine Johnson.

Due to the COVID-19 pandemic, private services will be held at the convenience of the family at the Crawford Funeral Home in Escanaba with Rev. Darryl Pepin officiating.

Bob will be laid to rest next to his wife, Marilyn in the Holy Cross Mausoleum.

A very special thank you to the staff and residents of Christian Park Village for their care, friendship and support to Bob and family during his stay with them.

Memorial tributes may be shared on our website by visiting crawfordfuneralhomes.net. The Crawford Funeral Homes are assisting the Arkens family.