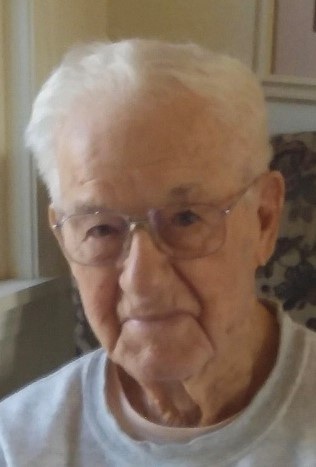 Carl was born in Gladstone on May 15, 1925, son of Carl and Eunice (Pineau) Davis. He attended All Saints Catholic Grade School and Escanaba High School, Class of 1943.

He enlisted in the United States Marine Corp on Aug. 12, 1943, serving on the Pacific coast. While on his way to Guam, the war ended. He was then posted to China, repatriating Japanese military until his honorable discharge in August 1946.

Carl began his career at Mead Paper in 1947. He worked there for 40 years before retiring as a conversion foreman in 1987.

Among survivors are his children, Michael (Diane) Davis of Livonia, Mich., and Stephen (Carol) Davis of Escanaba, Mich.; seven grandchildren and seven great-grandchildren.

Visitation will be Saturday, Sept. 28, from 9 to 11 a.m. at the Crawford Funeral Home, 302 S. 13th St., Escanaba. The Delta County Veterans Council and Marine Honor Guard will have military rites at 10 a.m. The funeral service will follow at 11 a.m. with Deacon Mike LeBeau officiating. A gathering will immediately follow at the multi-use complex on the U.P. State Fairgrounds.

A graveside service will be held at Holy Cross Cemetery.