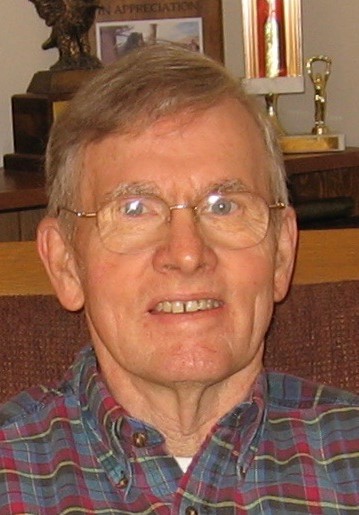 Jerry’s professional life focused on education. He attended Central Michigan University and received a BS degree in education in 1961 and a MA degree in school administration in 1963. Jerry earned doctor of education degree from Western Colorado University in 1974.

From 1970-74, Jerry worked as the business manager for RE-1 Valley Schools in Sterling, Colo. During this period, the family purchased a pickup truck camper and toured many notable sites in the Rocky Mountain West, including Yellowstone, Grand Canyon, and Glacier National Parks.

Upon returning to Michigan in 1974, Jerry worked as business manager of the Delta-Schoolcraft Intermediate School District in Escanaba until his retirement in 1987 due to health issues. During this period, Jerry enjoyed playing golf, fishing, and hunting at the family camp north of Rapid River. During the past 15 years, Jerry and Jean have enjoyed summers with family and friends at their Indian Lake cottage near Manistique.

Jerry was preceded in death by his mother and father and close relatives John and Corinne Schnurer, Raymond Gardapee, Dale Smith, and Bobbi Albright.

Visitation will be held Saturday, Nov. 10, at the Crawford Funeral Home, 302 S. 13th St., Escanaba from 10:30 to 11:30 a.m. Mass of Christian Burial will be held at St. Joseph & St. Patrick Catholic Church, Escanaba at 12 p.m. with Rev. Rick Courier officiating. Burial will take place in Lakeview Cemetery in Escanaba.

In lieu of flowers, memorials may be directed to St. Vincent de Paul Society.