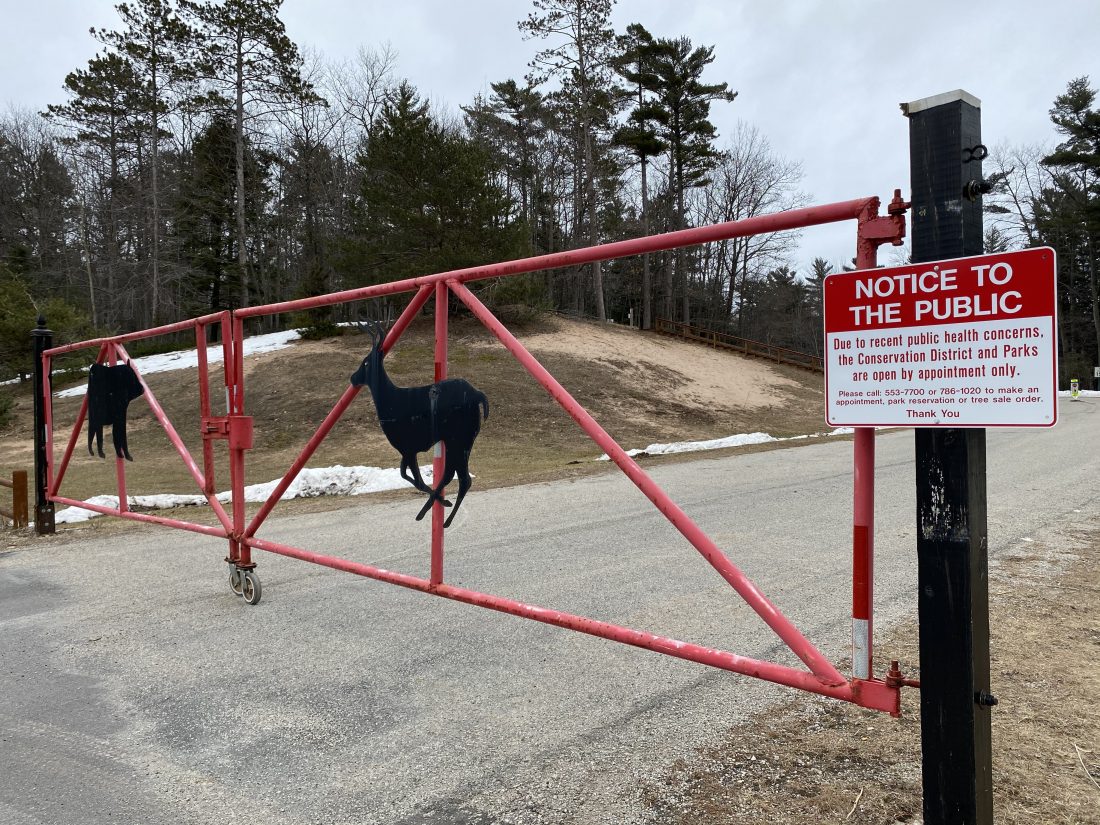 Jordan Beck | Daily Press Signage on the gates of Pioneer Trail Park instructs visitors to call the Delta Conservation District for assistance Tuesday. While the district plans to reopen Delta County’s parks next month, the impact that COVID-19 will have on county parks in 2020 is not yet clear.

ESCANABA — While the Delta Conservation District (DCD) plans to reopen Delta County’s parks next month, the impact that COVID-19 will have on county parks in 2020 is not yet clear.

According to the “COVID-19 Information” section of the official Michigan Department of Natural Resources (DNR) website, state parks and recreation areas were still open to the public — with many amenities closed and reduced. Visitors are required to stay at least six feet away from other people, and anyone in violation of this order could face misdemeanor violation/arrest penalties, including up to 90 days in jail and/or a fine up to $500.

“If it becomes evident that people are not practicing effective social distancing while visiting these state-managed resources, we will close them to protect the health of our visitors and our staff,” the website stated.

Additionally, all campgrounds in Michigan’s state parks and forests will be closed through at least April 13.

Before the coronavirus pandemic arrived in the United States, Delta County’s parks were slated to open on May 14 this year. In an interview earlier this week, DCD Executive Director Rory Mattson said this was still the case.

“We’re hoping that it’ll run its course by then,” he said.

While the parks managed by the DCD are not state parks, Mattson said the district would likely follow the state government’s lead on park and campground closures.

“I don’t know if that will affect us or not,” he said.

So far, the DCD has made few changes to the reservation process for campsites and recreational areas in Delta County’s parks.

“We have been taking reservations since March 1 — we’re continuing to take reservations,” Mattson said.

Reservations are not currently being accepted in person. Instead, people can make reservations by calling the DCD.

If the county parks and/or park campgrounds are closed to the public after their original opening date, Mattson said the DCD would get in touch with people who reserved campsites and recreational facilities to notify them of the change. The district would also fully reimburse these people for the costs associated with their reservations.

Aside from any potential problems for campers at county parks this year, Mattson said the pandemic has already affected plans to establish a new campground at Rapid River Falls Park.

He noted the DCD needs to get some permits approved by the Michigan Department of Environment, Great Lakes, and Energy and to submit an engineer’s drawing to the DNR for work on the campground to begin. Unfortunately, the district has been unable to meet with these departments or an engineer.

“The field work has just been shut right down,” Mattson said.

Efforts to establish the new campground will be supported by a grant from the Michigan Natural Resources Trust Fund. Because work on the campground is scheduled to be completed this summer, Mattson said the DCD plans to reach out to the DNR if the situation continues.

“We’ll be talking with them, too, in case it lasts longer,” he said.

The Delta County Forest — which is never closed to the public — has not been affected by coronavirus.

Mattson also said all timber reserve sales on land included in the county forest have been completed.

“There’s no more cutting to be done out there by someone other than the county,” he said.

Wildlife habitat work in the county forest is expected to begin in June.