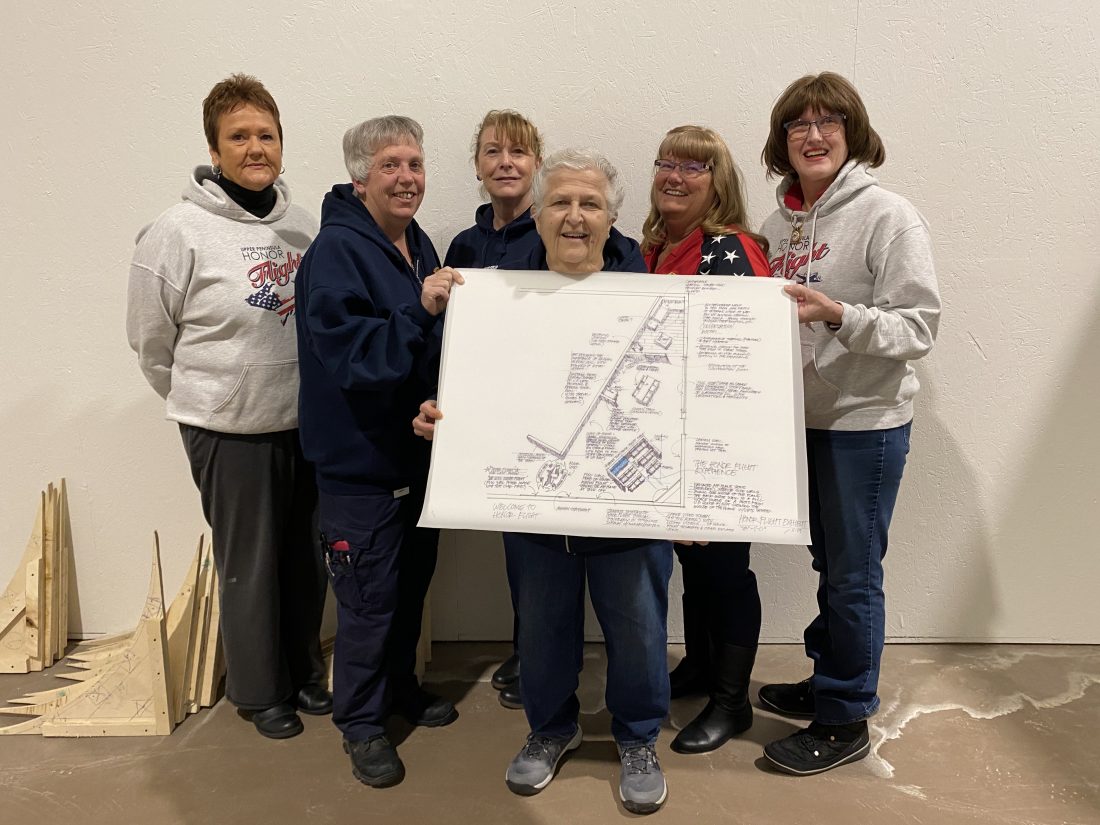 ESCANABA — An exhibit being developed at the multi-use complex on the U.P. State Fairgrounds will give visitors an opportunity to learn about the Upper Peninsula Honor Flight. The committee behind the project has begun looking for donations in support of the exhibit, which will be known as “Honor Flight Legacy.”

U.P. Honor Flight is a non-profit organization that gives veterans in the region all-expenses-paid trips to visit memorials in Washington, D.C. Its most recent flight, Mission XVII, took 85 veterans from across the U.P. to the nation’s capital and back in September 2019.

Initial plans for museum space at the multi-use complex included two exhibits — the Webster Marble “Inventing the Outdoors” Museum, which opened along with the complex last year, and the U.P. Veterans Museum, which is under construction.

Waeghe said Ann Jousma-Miller, a member of the committee for the veterans museum, approached U.P. Honor Flight in September 2019 about the possibility of using a portion of the museum space for an Honor Flight-based exhibit. The organization agreed to her proposal shortly thereafter.

“We started working … in January,” she said.

Despite its location, Waeghe noted Honor Flight Legacy is separate from the U.P. Veterans Museum.

Plans for the exhibit were drawn up free of charge by Kent Anderson, a friend of Waeghe’s husband who is a retired architect in Detroit.

When it is completed, one section of Honor Flight Legacy will simulate the planes veterans on Honor Flights take to and from Washington, D.C.

“We have acquired some airplane seats from an actual airliner,” Waeghe said.

The seats will be put on display in an area made to look like the fuselage of an airplane.

According to Waeghe, other elements of the exhibit will include a video showing visitors what veterans experience on Honor Flights, murals displaying monuments visited by veterans on the U.P. Honor Flight, a “mailbox” where visitors can write letters to veterans — which will be distributed on future Honor Flights — and a “reflecting area” meant to show the lighter side of veterans’ lives.

“They were human beings who still needed to find an inner peace with themselves — to enjoy life,” she said of the reflecting area.

Waeghe said the committee has asked people in the area to share photos of local veterans in rare moments of rest and relaxation while on active duty. These photos will be put on display in the reflective area.

The exhibit should be largely finished in time for the 2020 U.P. State Fair. Committee member Ann Roman said she is looking forward to the project’s completion.

“I think it’s going to be awesome when we get done,” she said.

Jill Johnsen, another member of the committee, said the exhibit will help educate youth about both the Honor Flight and mid-20th century wars, such as the Vietnam War and Korean War.

“The young generation now — they don’t get it in school,” she said.

Since the Honor Flight Network’s mission statement focuses entirely on the flights themselves, the U.P. Honor Flight cannot put funds that have not been explicitly donated for Honor Flight Legacy towards the exhibit. As a result, the committee has started to seek financial support from local residents and organizations.

Donations in support of the exhibit can be sent to 7508 J Rd., Gladstone, MI 49837. Make checks out to “Honor Flight Legacy” or specify cash donations are intended to go towards the exhibit.

Photos for the reflective area can be sent to 802 Wisconsin Ave., Gladstone, MI 49837. People are advised to send copies of their photos instead of the originals. High-quality copies are preferred but not required.

ESCANABA — Students in the Escanaba School District will each have a device — either a Chromebook or iPad — ...

ESCANABA — With bipartisan expungement reform legislation being reviewed by the Michigan Senate, local ...

ESCANABA — A long-running event meant to help low-income families pay their heating bills will return to two of ...

ESCANABA — The Escanaba City Council approved a three-year moratorium on the construction of new hotels and ...