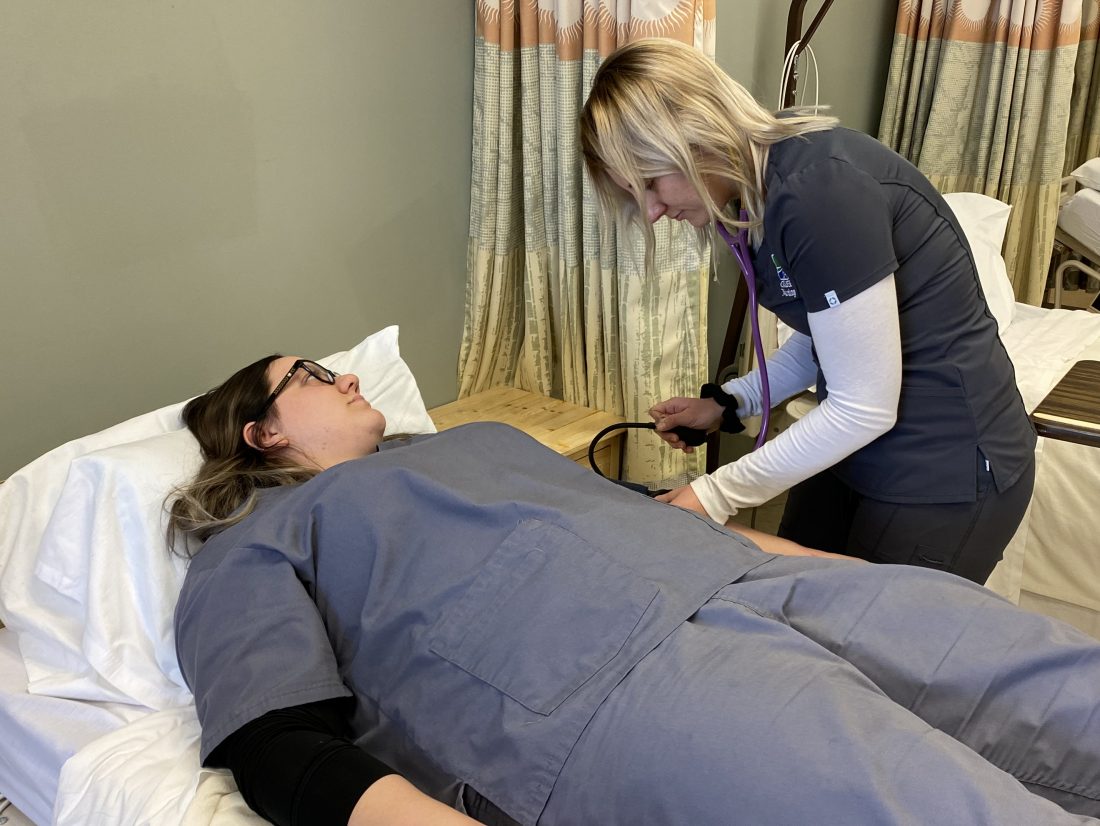 ESCANABA — Since Bay College’s early days, healthcare programs have been among its biggest draws. Bay’s offerings in the field are set to expand in the future.

“(Healthcare) in general has been a major focus of Bay College since its inception, really,” Vice President of Academic Affairs Matthew Barron said.

In the 1965-66 school year, students graduated from Bay’s practical nursing program for the first time. The program — along with the college’s registered nursing program, which had its first graduates in the 1978-79 school year — has continued to bring in students over the years.

“Between the two of them, we’ve graduated over 4,000 students,” Barron said.

Despite their age, Bay’s nursing programs have been kept up-to-date. One example of this has been the college’s simulation lab.

“It’s most heavily used in our nursing programs, as well as our EMT and paramedic (programs),” Barron said.

Bay is looking to better leverage the facility across the college and in the community.

Thanks to their endurance and continued popularity, Barron said Bay’s healthcare programs have had a significant impact on healthcare providers across the Upper Peninsula.

“If you’re in a healthcare facility, there’s a pretty good chance that you’re interacting with a Bay College graduate,” he said.

“There’s just a number of ways that we serve the healthcare community in the U.P.,” he said.

The college has not been resting on its laurels in regards to healthcare.

“The new program that we have that will go in front of the board of trustees, I believe, in March is our medical assistant program,” Barron said.

Allied Health Coordinator/Co-Advisor Deanna Robinette said the college decided to introduce the program after receiving feedback from an advisory board made up of representatives of healthcare facilities in the area.

“It was identified by our (committee) … this was a need,” she said, noting the market for medical assistants seems to be trending upward.

According to a proposed description, Bay’s certified medical assistant program would be a 12-month occupational certificate program. It would be intended to prepare students to safely and effectively perform medical duties and administrative functions in accordance with regulations.

“The purpose of it is to provide skilled labor in the community,” Robinette said.

If approved, the medical assistant program would become available in Bay’s fall 2020 semester.

Bay is also currently working with state government to get a satellite paramedic program approved for elsewhere in the region. Barron said that, to his knowledge, the college’s paramedic program is the only one of its kind in the U.P.

The location of the proposed satellite program has not yet been announced. Barron said a number of possible sites are under consideration.

Along with these initiatives, Bay is aiming to more heavily promote its healthcare-related offerings to encourage increased student participation in the programs.

“We want to maximize the effect of these programs on the community,” Barron said.

Robinette said people who would like to participate in one of Bay’s healthcare programs during the fall 2020 semester should sign up soon.

“Now’s the time to start applying to our programs,” she said, noting that — unlike other programs at Bay — many healthcare students have to be awarded a seat in their program of choice.

ESCANABA — Students in the Escanaba School District will each have a device — either a Chromebook or iPad — ...

ESCANABA — With bipartisan expungement reform legislation being reviewed by the Michigan Senate, local ...

ESCANABA — A long-running event meant to help low-income families pay their heating bills will return to two of ...

ESCANABA — The Escanaba City Council approved a three-year moratorium on the construction of new hotels and ...