Clarissa Kell | Daily Press Trevor St. John, the director of forest resources at St. John Forest in Spalding Township, stands in about 27 inches of snow drifted against logs in the St. John Forest log yard across the street from its office location last winter. Dressing for the weather is good protection against frostbite.

ESCANABA — Many people in the Upper Peninsula enjoy winter outdoor activities, but along with the fun, there is the danger of frostbite.

“Frostbite can be so insidious,” said Delta County Medical Control Authority Medical Director Dr. Edward Bigsby. “You may not know what stage of frostbite you’re in until you re-warm the area. I advise people to use the buddy system to watch each other for red patches. We are unable to see ourselves in total and cannot see when our skin is becoming damaged.”

Be aware of early frostbite signs. In the ‘frostnip’ stage skin turns red. Frostnip is a milder form of frostbite and can be treated by slowly re-warming the effected area.

“Signs of someone getting frostnip are, numbness, feelings of pins and needles, a burning, stinging, but no early painful sensation,” Bigsby said. “Skin gets red, but is still pliable.”

Other stages of frostbite require medical attention. Skin, tissues, muscle and bones once damaged can get infection and nerve damage.

“A superficial frostbit area can be re-warmed. There will be some injury to the skin, but it will heal in time,” said Bigsby. “The full thickness of the skin is frozen and maybe damaged with blisters, like third degree burning. The skin gets white and pale, firm or waxy … doesn’t move as well.”

Deep frostbite will show as black, or blueish grey, coloring of the skin and have more of a modeling clay feel.

“Tendons, muscles, and bone will all be affected,” Bigsby said. When the area is re-warmed it dies, the part auto amputates … the part falls off.”

Areas on the body easily prone to frostbite include the extremities, fingers, toes, nose, ears, cheeks, and the chin. The time someone can stay outside before frostbite occurs is dependent on weather and the individual’s heath.

“Wind chill index charts display a frostbite risk factor for an easy reference,” Bigsby said. “Our health, hydration, endurance, and how people dress are all factors. Diabetes and cardiovascular disease affect a person getting frostbite.”

Bigsby advises to keep feet and hands dry by changing out socks and gloves as needed. He also advises not to drink alcohol, or smoke, both impede blood flow through the body. During the winter months people venturing outside can get dehydrated easily and should focus on drinking more water.

“We lose a lot of moisture just by breathing, especially the elderly and babies,” said Bigsby.

People should wear protection when handling metal or fluids during sub-zero temperatures.

“If you splash gas when outside, it can instantly freeze your skin if it lands on it,” Bigsby noted.

Dress appropriately when spending time outside, whether it’s for a long or short duration, with clean, loose fitting clothing, in layers.

“I live by an old Yooper proverb,” said St. John Forest Director of Forest Resources Trevor St. John. “There’s no such thing as bad weather, only poor choice in clothing.”

St. John said staying active keeps the blood moving in the body, but clothing is everything.

“Having a wool-blend base layer and wool socks is essential … I’ve never ever regretted having what I need to get the job done right,” St. John said.

Do not overheat, because once you sweat you cannot stay warm.

“You should have a wicking layer, an insulation layer made of either wool or fleece, and an outer layer that is water and wind resistant, not proof,” said Bigsby. “You want the outer layer to breathe so you don’t sweat.”

On top of the outer layer he advises to add another outer shell with headgear that cover ears, and a scarf.

“You can pre-warm breathing with the scarf to conserve body heat and body water,” said Bigsby.

To keep hands warm wear gloves and mittens over the gloves. Foot gear should include sock liners, wool socks, and boots that fit well and resist water. Carry extra clothing and always tell someone where you are going. Carry emergency supplies, water and food, shelter, something to start a fire to stay warm.

“I’ve gone through the ice in swamps before, with a mile hike through the snow back to the snowmobile and another several miles back to the truck,” said St. John. “The icy water was terrible on my feet at first, but within a few minutes the wool was holding my body heat again.”

St. John agrees with Bigsby on many issues and would like to stress natural materials hold warmth even if they become wet. Synthetic materials are no match against old-fashioned wool, the kind he has found at thrift shops and inherited from his grandfather.

“Hypothermia is frostbite’s deadly companion,” said Bigsby. “Frostbite is a local condition, whereas hypothermia is global, through the whole body. One or both can happen at the same time.”

Bigsby is also a training officer for Delta County’s search and rescue team and has seen no severe cases of frostbite, but he has seen cases of mild to moderate hypothermia. The person loses fine motor skills, starts to shiver and gets grumpy during mild hypothermia. When body temperature is below 95 degrees, a person cannot walk straight, cannot stop shivering, speaks slow and is incoherent.

“I have seen this several times a year … most are not woodsmen,” said Bigsby. “I see it in car crashes and when people are not dressed well. It can happen in the summer as well, especially in water. In any water that is less than 70 degrees. That’s all of the bodies of water around here.”

St. John has never seen frostbite. The average forester isn’t exposed as often as one might think.

“Most foresters are the best dressed people I know when it comes to ‘dressing for the occasion’,” said St. John.

Upon first recognition of either frostbite or hypothermia, go somewhere warm to treat the symptoms.

“Re-warming is critical, earlier the better … but how? It can be a little tricky,” said Bigsby. “Never re-warm a part unless you guarantee it won’t get cold again.”

Get out of the cold and any restrictive clothing and head to the hospital.

“We tend to get away with things. We do it once, we do it again and again. Eventually it’ll catch up with you,” said Bigsby. “If you decide to take a snowmobile trip, even if it’s short, simple preparations can save a life. Tell others where you’re going. I wish each trail head had a log. It would help search and rescue locate a person quicker if we knew what way they went.” 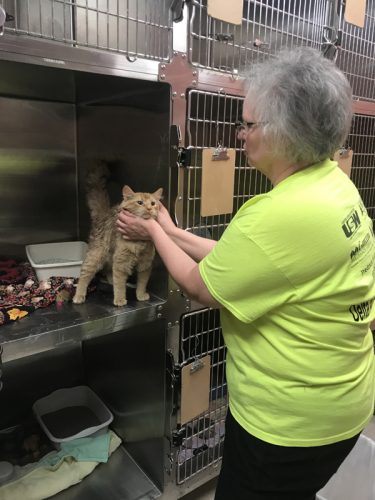 ESCANABA — The areas served by the Daily Press — Delta, Schoolcraft and northern Menominee counties — can now ...

ESCANABA — Delta County still had no confirmed cases of coronavirus as of Friday afternoon, the county announced ...

ESCANABA - In response to the coronavirus pandemic, Bay College has announced plans to postpone its commencement ...

Whatever became of Dan Quayle?