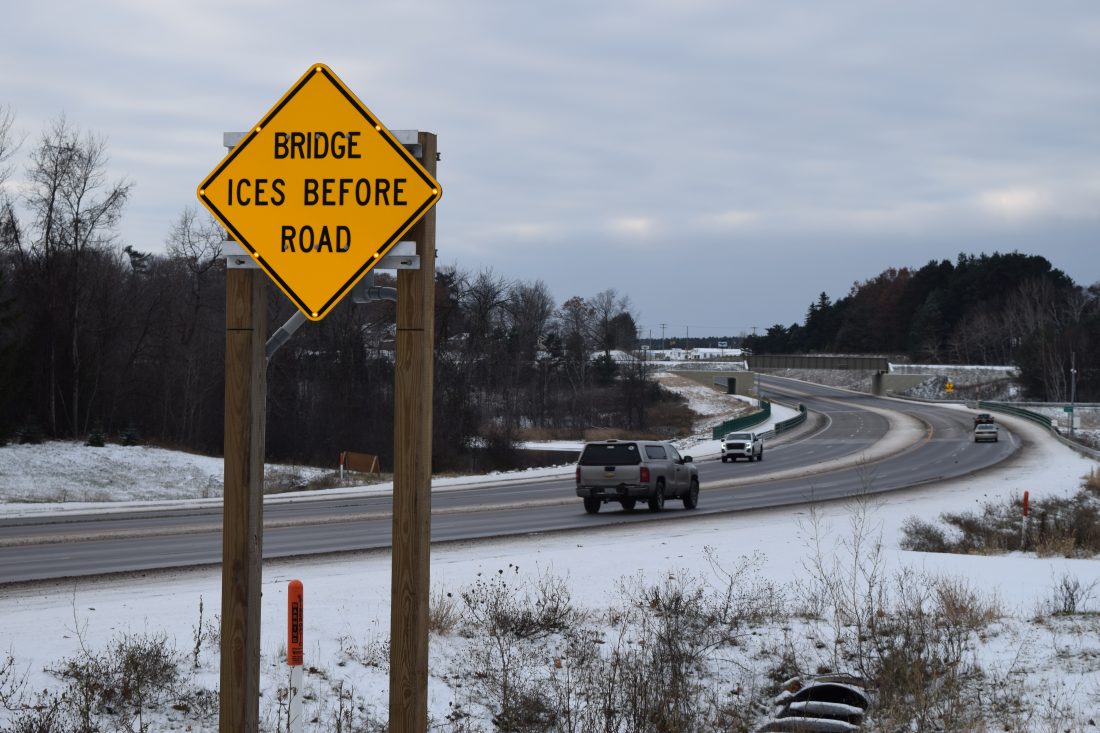 Jordan Beck | Daily Press LED lights on a warning sign — part of the new bridge deck warning system for the U.S. 2 and 41 bridge over the Escanaba River — warn motorists of potential slippery conditions on the bridge Thursday.

WELLS — Now that colder temperatures are arriving in the area, a new feature on the U.S. 2 and 41 bridge over the Escanaba River — a bridge deck warning system — has begun providing information to drivers.

At the heart of the new system are sensors that measure air temperature, bridge deck temperature and humidity. When these factors suggest the bridge could be slippery, LED lights on two warning signs — one on each side of the bridge — are activated.

“The idea is to warn motorists that … the bridge could be slick, and that they should slow down,” Michigan Department of Transportation (MDOT) Communications Representative for the Superior Region Dan Weingarten said.

The system also notifies MDOT and the Delta County Road Commission when the warning lights are activated.

According to Weingarten, MDOT only has two other systems like this across the state. The systems are located in Otsego County and Cheboygan County and both are on I-75.

Weingarten said these systems have been effective so far.

“At the two locations downstate, we have not experienced a (fatality) or a serious injury case since the systems were installed,” he said.

The system on the Escanaba River bridge cost about $320,000. Weingarten said this was included in the budget for MDOT’s recent bridge project.

Testing for the system on the Escanaba River bridge started on the week of July 8. Another 60-day test period was completed in September.

However, some tweaks still need to be made to the system.

“It’s actually been activating more than we would like it to,” Weingarten said, noting the warning lights have been turning on whenever the air temperature at the bridge is low.

He added this is important to fix because MDOT does not want drivers to start ignoring the warning system.

“If motorists see these lights flashing all the time, then it’ll lose its effectiveness,” Weingarten said.

Weingarten encouraged people driving over the Escanaba River bridge to be particularly cautious if they see the lights on the warning signs flashing.

“This is important information to base your driving behavior on,” he said.