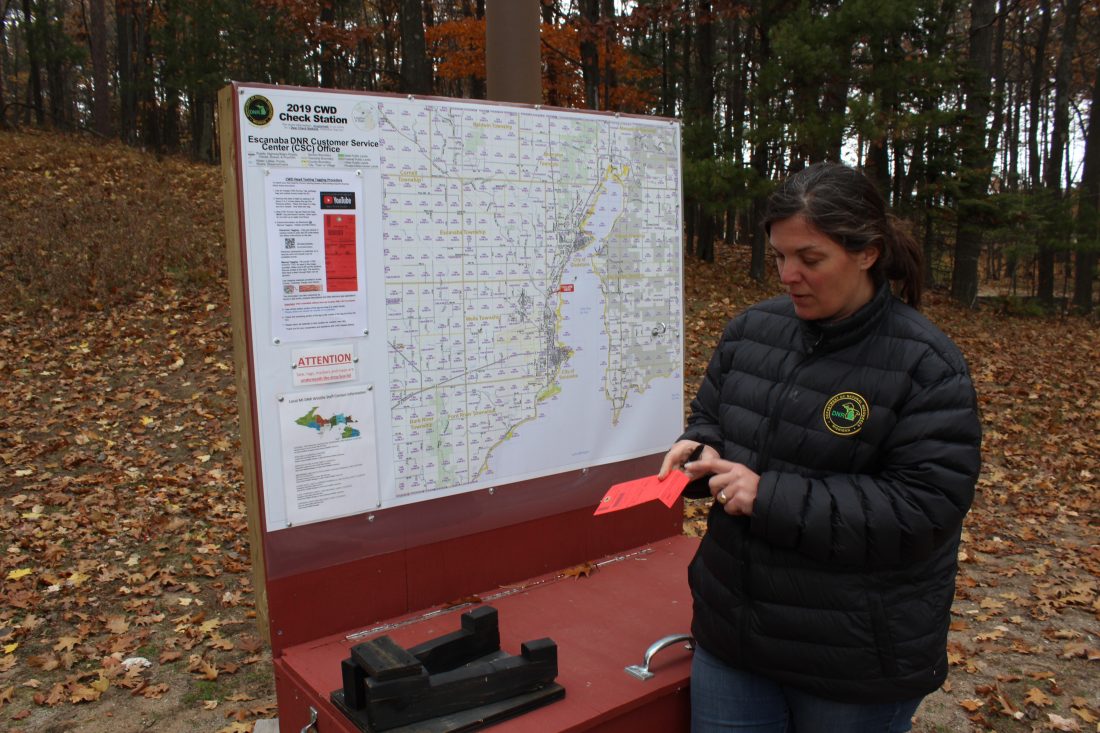 Clarissa Kell | Daily Press Karen Sexton, DNR wildlife biologist from the Escanaba Customer Service Center, explains how the chronic wasting disease (CWD) testing tag provides information to hunters on how to acquire their results at a DNR drop-box outside the Escanaba Customer Service Center recently. The DNR are hoping to test 2,654 deer heads from the CWD Core Surveillance Area to determine the extent of CWD in the Upper Peninsula.

ESCANABA — This hunting season is the first with the no-bait rule within the Core Chronic Wasting Disease Surveillance Area in the Upper Peninsula. An official from the Michigan Department of Natural Resources provided information to help clear up some of the confusion pertaining to the no-bait regulations within the core area.

CWD is a fatal neurological (brain and nervous system) disease found in cervids (deer, elk and moose). The disease attacks the brain of an infected animal and produces small lesions that result in death. There is no cure; once an animal is infected, it will die.

In July, a series of deer hunting regulations aimed at slowing the spread of chronic wasting disease were approved by the Michigan Natural Resources Commission in Lansing. The regulations include a ban on baiting in part of the central U.P. that is being monitored for chronic wasting disease after a deer tested positive for CWD in southern Dickinson County in 2018. Consistent with regulations in the Lower Peninsula, there is an exception to the baiting ban in the U.P. Core Area for hunters with disabilities during the Liberty and Independence hunts.

Karen Sexton, DNR wildlife biologist from the Escanaba Customer Service Center, said there is a difference between baiting and feeding, however, both are banned within the core surveillance area when it pertains to deer.

According to the Michigan Department of Natural Resources website, bait is defined as a substance intended for consumption that is composed of grains, minerals (including salt and salt blocks), fruits, vegetables, hay or other food materials, which may lure, entice or attract deer or elk as an aid in hunting. Feed is defined the same way except feeding is for any reason other than hunting.

The Core CWD Surveillance Area comprises some 660 square miles, defined by major roadways within portions of Menominee, Delta and Dickinson counties around the single case of a CWD-positive deer found last year in Waucedah Township. Numerous deer taken during the 2018 deer hunting season were tested and no additional cases were found.

“The reality is, these baiting and feeding bans are put in to place to begin to reduce the transmission of the disease,” Sexton said. “The department certainly doesn’t think that we will eliminate chronic wasting disease by doing a baiting and feeding ban, but the intent is to slow down the transmission of the disease — and this is something we can control.”

She explained CWD is transmitted both directly and indirectly, with directly being nose to nose contact where saliva is exchanged and indirectly such as when a deer comes in contact with a CWD infected deer’s urine in the environment.

Although baiting is banned, there are still valuable tools hunters can use to attract deer within the core surveillance area.

One of the tools hunters can still use are food plots. Food plots, which are naturally occurring foods, standing agricultural crops, or food placed as a result of using normal agricultural practices, are not considered to be bait or feed.

Sexton said another tool hunters can still use in the core area is urine-based scents.

“Urine attractants are allowed if the product has an ATA symbol on it,” she said. ATA stands for Archery and Trade Associations.

Sexton explained the ATA emblem on urine-based scent packaging designates that the facilities manufacturing these products are less likely to be introducing CWD.

Food-based scents can also be used in areas where bait is banned, provided the product is not intended for consumption and is inaccessible to deer contact.

Feeding other wildlife is allowed within the core surveillance area as long as deer cannot access the feed.

“One of the other groups of wildlife that folks tend to feed during the winter period are birds, right? So people like to put out their bird feeders so they can watch the birds,” Sexton said.

She added if a deer can eat the feed then it would be considered feeding deer and not complying with the law in the core area.

The DNR encourages those within the core area that want to continue feeding the birds to use tube, hopper and suet bird feeders rather than putting seed directly on the ground or using platform feeders.

There are also mess-free birdseed options, according to Sexton.

She said if people were to use a regular bird feeder in the core area, then taking an extra step by putting a fence around the feeder would ensure they were in compliance with the law.

A major concern within the core area is feeding wild turkeys, as turkeys usually struggle during the winter without supplemental feeding.

“So a lot of folks in this sort of central area have a strong invested interest in turkeys and feed turkeys through winters because otherwise turkeys struggle in this climate,” Sexton said.

She explained just like other birds, people in the core area can continue to feed wild turkeys, however, there are steps they have to take to make sure they’re in compliance with the new regulations.

“There are some really good turkey feeding designs that exclude deer — to some extent some of those turkey feeders also sometimes require an extra step or precautionary to make sure they exclude deer,” Sexton said.

Some designs have ways to exclude deer from the feeder itself, but some of those designs don’t take into account the corn or grain that drops when turkeys eat.

“When corn and grains drop to the ground, deer could access that and so there are some designs that take an extra step that would exclude deer from being able to access the ground below a turkey feeder,” Sexton said. “If an individual does that, then they are in compliance with the law but if they don’t take that extra step then they are allowing deer to access feed and are not complying with the law.”

ESCANABA — Now that the dust has settled from New Year’s festivities and 2020 is in full swing, the Escanaba ...

ESCANABA — Since Jan. 1, there have been countless posts on social media warning people to write out the full ...

Mill celebrates a century of papermaking

Police give data on stalking, harassment

Protection available for victims of stalking

ESCANABA — Stalking can happen to anyone from anyone — a former partner, an acquaintance or a complete ...