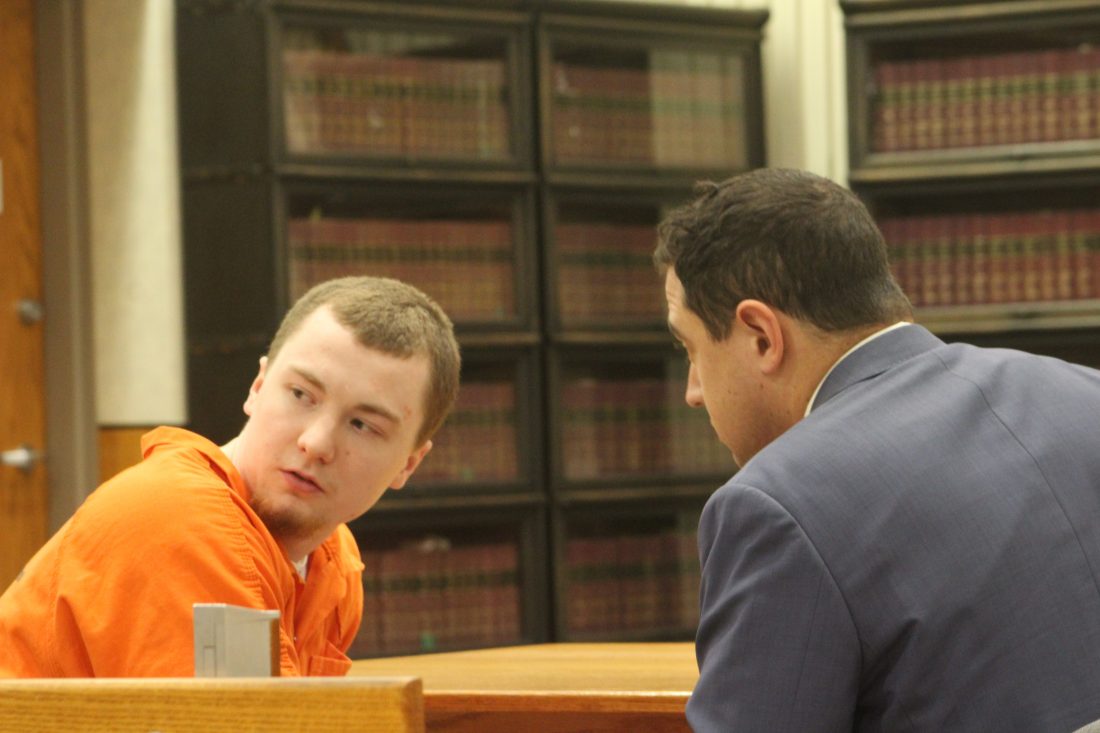 ESCANABA — An upcoming criminal sexual conduct trial for a Rapid River teen is still set to begin Oct. 22, but following motions made in Delta County Circuit Court Friday, the teen will only face one charge instead of two. Other motions, including trial adjournment and dismissal of evidence, were heard during the motions hearing but were ultimately denied.

The charges stem from an incident in August 2018 in Masonville Township. Two other teens faced charges from the incident — Tanner James-Arthur Cannon, 18, and Hunter Grizz Gallagher, 18, both of Gladstone.

Gallagher was sentenced for his role in this and another criminal sexual conduct case (see related story). Cannon has taken a plea agreement but will not be sentenced until after Greenlund’s sentencing.

“We are here today on some motions that have been filed by the defendant, and there is also a motion that has been filed by the People,” said Dickinson County Circuit Court Judge Mary Barglind, who has been presiding over the cases.

Anthonio Ruiz, Greenlund’s attorney, filed motions including repressing an audio recording allegedly taken during the assault, dismissing the one count of criminal sexual assault – first degree, a bond reduction, and adjournment of the trial until after an investigation into the previous assistant attorney general prosecuting the cases ­concludes.

Assistant Attorney General Danielle Hagaman-Clark took over the cases in Delta County from Brian Kolodziej, who was previously prosecuting the case. He resigned from the Michigan Attorney General’s Office after an inappropriate relationship with a victim in another case downstate was discovered. The Michigan State Police are currently investigating Kolodziej.

Ruiz asked the court to adjourn the trial until after the investigation into Kolodziej concludes so they’d know the impact it will have on the cases here in Delta County.

“I think the court — it’d be best to adjourn the matter until the investigation by the Michigan State Police is completed in terms of the allegations and his impact on this case being prosecutor on this matter (from) October to just recently in September. Obviously, there’s a cloud that he has cast over his cases — and it’s not just this one case with Central Michigan University. Issues have resurrected in other places,” Ruiz said.

Ruiz explained he had issues with Kolodziej in this case not providing copies of evidence.

Barglind inquired to Ruiz why she was just hearing about Kolodziej not providing copies of evidence to him two weeks before the trial. Hagaman-Clark said she doesn’t know what evidence Ruiz doesn’t have, but he could look at all of the evidence she has for the case.

Hagaman-Clark argued against adjourning the trial for the investigation, as the Attorney General’s Office looked into Kolodziej’s actions involving the cases here in Delta County and determined the cases were not affected by Kolodziej’s alleged actions in other cases downstate.

Ruiz countered that the Attorney General’s Office shouldn’t determine whether or not if Kolodziej had done anything inappropriate or influenced the testimony of the victims.

Rebekah Snyder, a victim advocate from the AG’s office, and the victim in Greenlund’s case testified Kolodziej was never alone with the victim.

“I do not believe there is any reason to believe that anything has flowed through that would in any way, shape, or form affect this case,” Barglind said.

Hagaman-Clark motioned to amend the criminal sexual assault – first degree count, however this motion was denied following the dismissal of that count.

Another motion was heard regarding an audio recording, which was allegedly recorded during the incident. Ruiz motioned for the recording to be inadmissible in the trial due to its poor quality and the court relying on the victim and Cannon to authenticate the recording.

After hearing the arguments on both sides, Barglind decided the recording would be admissible for use in the trial.

The recording will be made part of the record for the case files, however it will be sealed to be released and disclosed only upon court order.

Towards the end of the hearing, Ruiz requested the bond amount for Greenlund again be reviewed — stating there were many people in the courtroom willing to testify on behalf of his pretrial release.

Barglind said she had previously reviewed the transcripts from the past bond modification hearing and stands by her decision of denying the motion to lower the bond.