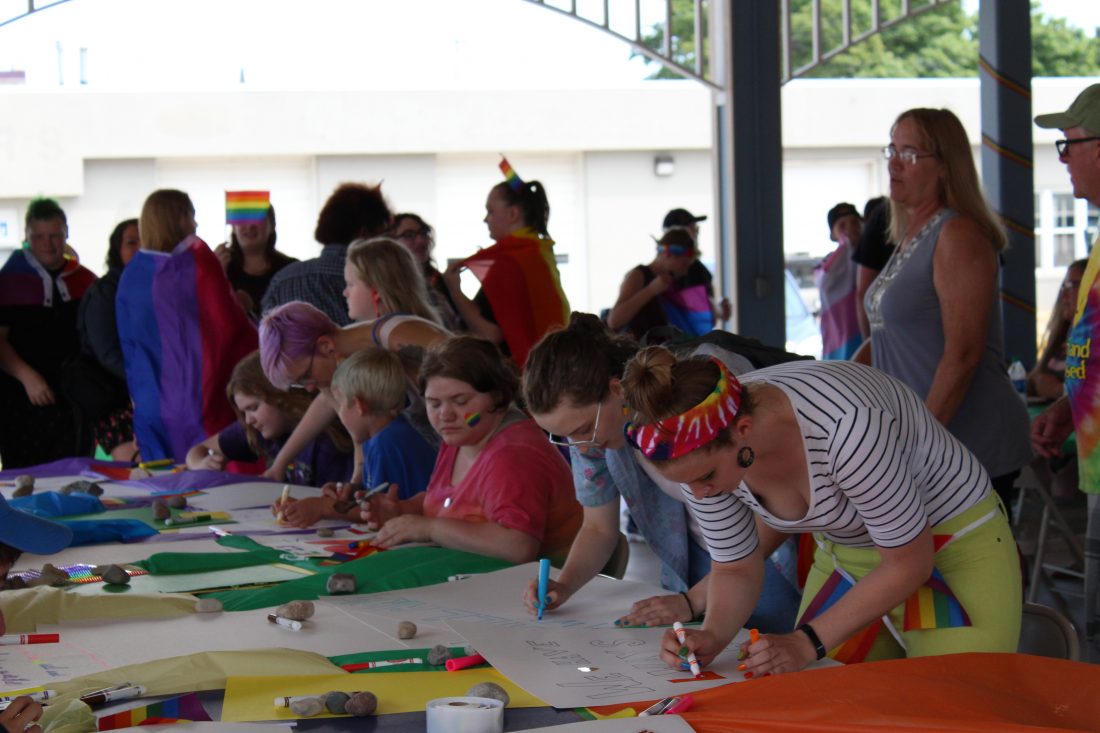 Clarissa Kell | Daily Press Lizzy Lynch, at right, and others create posters at the first ever pride picnic and march event at the Escanaba Market Place in Escanaba Saturday. The event included many activities and a march down Ludington Street.

ESCANABA — A safe space for acceptance and love was created in downtown Escanaba Saturday.

The Escanaba Market Place filled with LGBT community members and allies alike to show they are here and they are proud of who they are during the first ever pride picnic and march in Escanaba.

“There are so many people growing up here who don’t know that they’re loved and supported just being who they are,” Lizzy Lynch, one of the organizers of the event, said. “I just wanted to show people that there are people here who love them, there are people here who support them. Even if most of the time the hate tends to drown that out. At least for one day the love can drown out the hate.”

Lynch explained she came up with the idea to have a pride event in Escanaba after feeling left out when her friends from college were going to pride events in the bigger cities that they’re from.

“So I was just tweeting my thoughts, stream of consciousness, ‘What if this happened here? Like what if we just did that?’ And I posted it on Facebook to see if there would be any interest and the response was immediately overwhelming,” she said.

From there, the organizing began, which Lynch described as quite a process that she wouldn’t have been able to do without the support from others in the community and her family.

“I figured what better place to do it than the place where the LGBTQ community doesn’t really have a space and hasn’t really had a voice. It’s been over due for awhile now,” she said.

The event included many activities within the structure and a march down Ludington Street, as well.

There were free food and beverages, a photo-booth area with props, a Free Mom Hugs booth, face painting, pride merchandise for sale and a poster-making area.

Melissa Blume, the regional leader in the Upper Peninsula for Free Mom Hugs, said there were 40 registered huggers for the event. Free Mom Hugs is a national non-profit organization made up of affirming parents and allies who love the LGBT community unconditionally and are working towards full affirmation and equality for all.

Blume said they were a network of moms at the event to support everyone.

Lynch’s mother also made a rainbow afghan that was raffled off at the event.

Lynch said the proceeds from the raffle and any other donations collected at the event or through the GoFundMe page would go towards the Trevor Project.

The Trevor Project is the leading national organization providing crisis intervention and suicide prevention services to 25 years old or younger members of the LGBT community.

Aidan Pietila, the first transgender man to win Mr. Upper Peninsula, spoke before the march down Ludington Street. The march started at the market place and went all the way to Harbor Tower where they turned around.

People from all over the Upper Peninsula, not just the Escanaba area, came to the event.

“It just goes to show how needed this kind of thing is,” Lynch said.

Morgan Hyland, who traveled from Manistique to attend the event, said having an event like this in Escanaba is extremely important.

“It’s important so that way people can feel like they belong somewhere. Somewhere they have a place to be themselves and they don’t have to hide it,” Hyland said.

Kristin Loretti came to the event with her husband, little sister and dog.

Loretti described the event as a safe space for the community and helps people feel comfortable with who they are.

Although the event is about love and acceptance, it was not welcomed with open arms by everyone locally.

After some backlash on the event online, Lynch said she was a little worried about people showing up at the event.

Smiling faces and laughter were abundant at the event.

Lynch said she had never organized a big event like this before and for it to have turned out as it did was an amazing feeling.