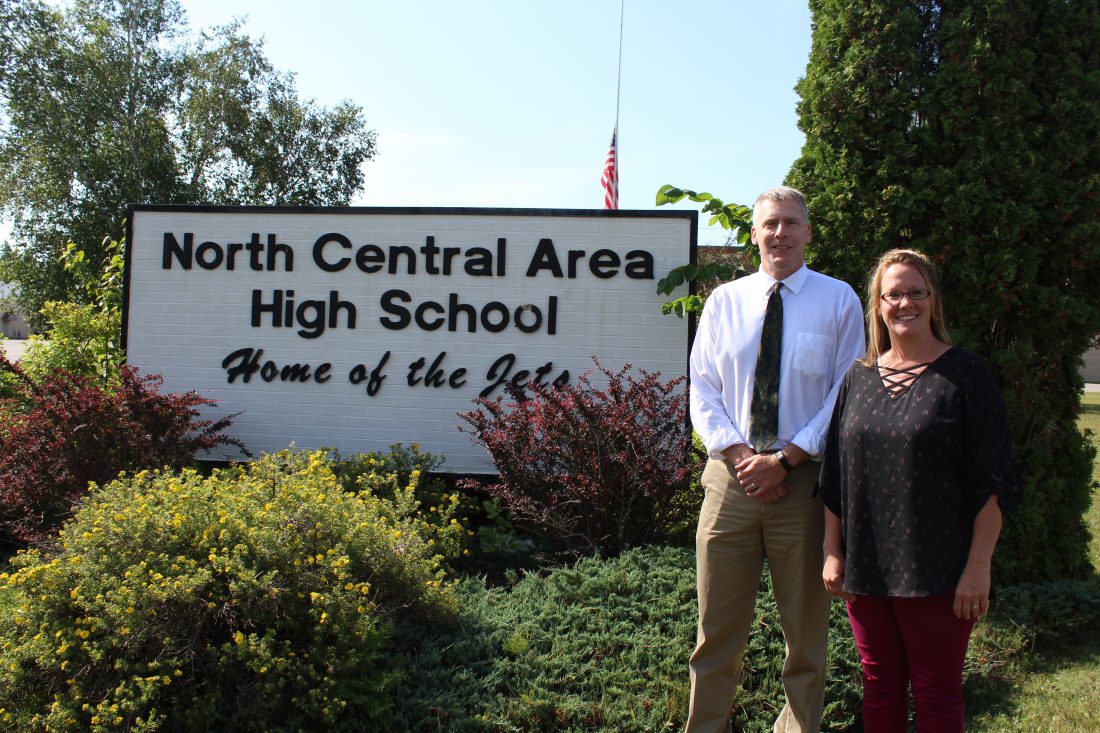 POWERS — The North Central Area Schools District has a new administrative team gearing up for the upcoming 2019-2020 school year.

Superintendent and Elementary Principal Jennifer Eichmeier and High School Principal David Florenski are focused on the future for the school district and the community.

Eichmeier officially started her new position on July 2 and Florenski started on Aug. 1.

Both Florenski and Eichmeier agreed there is a foundation for success already laid out within the district, but they plan to raise the bar.

“We have many great things happening here, I just want to take it to the next bar — I want to raise the bar even higher,” Eichmeier said.

Expanding the School to Work program by building more partnerships with other educational avenues, like Bay College, and more local businesses for more opportunities for students to find their future career is a main goal of the administrative staff.

The School to Work program was initiated during last school year. It allows eligible seniors a chance to gain experience in the workforce, test out a possible career choice and acquire elective credits.

Eichmeier said they are very fortunate with the current local businesses that have partnered with the school for the project and would love to continue to broaden what they provide students for their future success.

Having other school districts and people look to North Central and know what it’s doing is another goal.

Florenski said it may be a big goal with North Central being smaller than other school districts, but with their plans and goals for the future North Central will become a beacon school in the U.P. and state of Michigan.

“Under Jennifer’s leadership, we are up to that challenge,” he said.

Eichmeier may be the new superintendent and elementary principal for the school, but she is far from new to the school and the Powers area. Eichmeier is originally from Powers and a North Central graduate.

“I returned home here just because I wanted to give back to my community. I had many wonderful teachers that were impactful in my life that drew me to education,” she said.

She explained two of the North Central teachers that had a lasting impact on her were Linda Bartoszek and Eunice VanElsacker.

Overall, Eichmeier has been working in the field of education for 23 years. She worked in Wisconsin until 2017 when she came back to the area to teach as an elementary teacher at North Central.

“I left the classroom because I wanted to have a greater impact on the larger population of my school. I wanted to reach all kids. I wanted to build the foundation that we have and move North Central forward,” she said.

Prior to his time in East Jordan, Florenski worked at the Gladstone Area Schools for 20 years.

Florenski said although he grew up in Gaylord downstate, coming back to the U.P. is like coming back home.

In their own words, the transition for the new administrative staff has been seamless.

“Jennifer and I work very well together, it feels like we’ve worked together forever,” Florenski said. Eichmeier agreed to this sentiment, actually speaking in unison with Florenski towards the end of the statement.

North Central Area School District recently retained the services of Kenneth Groh for the 2019-2020 school year to consult with the district on a part-time basis.

Groh was a former superintendent of North Central.

“Ken (Groh) has been a phenomenal resource and mentor,” Eichmeier said.

She said with his past experiences and the changes that have been made in education, they’re able to bridge the gap together to see where the school district has been and how they want to change it for the future.

Eichmeier and Florenski agreed working as a team, not just with each other, but everyone in the community is important to the duo.

“I mean I truly don’t think there’s a challenge that we can’t over come because we see it as a partnership. We see our staff as members of our team. And I also want to include the parents and the community — they’re also partners and a huge support,” Eichmeier said.

She added they want everyone to feel welcome at North Central and that community is the main focus in their transition.

Florenski said he knows people are proud to be North Central Jets but they want to continue that legacy and enhance it.

“To have that ‘you bleed red and black’ (mentality). I know that culture is already here but I want to … make it more of a strong foundation,” he said.

“It’s not just a job, this is a lifestyle,” Florenski said.

He added, they are going to continue to think outside the box to meet the future needs for the community and students.

There will be a chance for students and parents alike to meet Eichmeier and Florenski before school starts up.

MACKINAW CITY (AP) — A 200-foot-long broken boring pipe remains embedded in the Straits of Mackinac and may not ...

ESCANABA — Members of the Bay College Board of Trustees met “Ann” — a training mannequin that Bay nursing ...