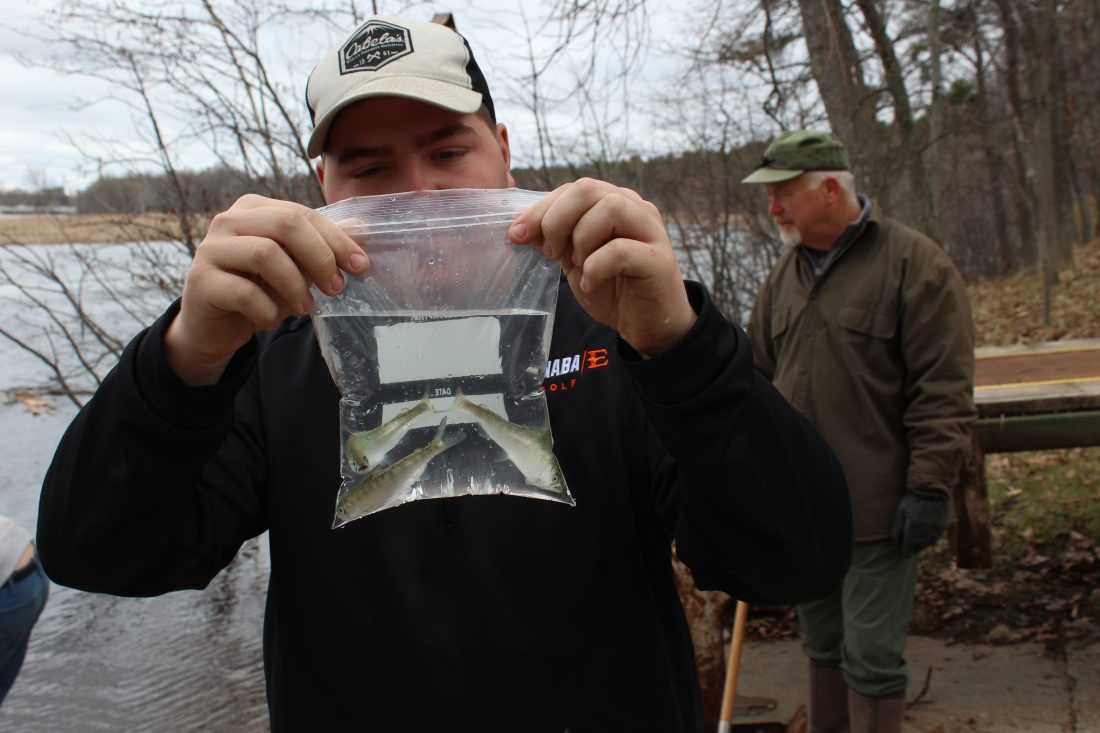 ESCANABA — Two local schools released Chinook “king” salmon that were raised by the students into the Escanaba River to mark the culmination of both of the schools’ Salmon in the Classroom program Friday.

The Fred Waara Chapter of Trout Unlimited (FWCTU), headquartered in Marquette, started the Salmon in the Classroom program more than a decade ago.

Bob Jensen, who is on the education committee for the FWCTU, said the program is one of Trout Unlimited’s most popular programs.

He explained the program has universal appeal because it can be adapted to different classes and fit any age group.

Through the Salmon in the Classroom program, FWCTU provides funding and support for the set up of eight aquariums in schools throughout the Upper Peninsula. The two local schools involved in the program are Escanaba High School and Gladstone Junior High School.

“We provide all the equipment and supplies; the DNR provides salmon eggs and the food; and then the kids get to raise them all winter long,” Jensen said.

Each year the aquariums are stocked with between 150 to 200 salmon eggs in late November, provided by the Michigan Department of Natural Resources. The eggs hatch in January. Teachers and students raise the salmon until mid-May when they take a field trip to a local salmon habitat and release the fish into the stream.

During the winter months, the teachers incorporate the salmon into many of their lesson plans.

Escanaba High School teacher Dan DeLong said this is his first year being the teacher directly involved with the program.

DeLong teaches conservation, biology and chemistry at Escanaba High School, but the class directly linked to the salmon is his conservation class with juniors and seniors.

Despite only his conservation class being involved directly with the program, DeLong said he had all of his classes participate in taking care of the salmon, since the fish have to be fed three times every hour.

He explained because his students are high schoolers, the lessons incorporated with the salmon are on genetics, the salmon life cycle, natural selection and water quality.

“The majority of it is the life cycle of the salmon,” DeLong said. “They’ll swim out to the lakes for five years and come back (to rivers and streams), lay their eggs then die. That’s what the Chinook salmon is all about.”

He added most of his students weren’t aware of the five-year life-span of the Chinook salmon.

According to DeLong, the Salmon in the Classroom program is important for his students because they live right on Lake Michigan, and salmon fishing is huge for the community. He explained salmon are a huge part of the culture near the Great Lakes, and the program gets the students directly involved in a topic that may be new to them.

DeLong expressed gratitude towards Trout Unlimited in making the program possible for the school districts in the Upper Peninsula.

“Without them, school districts wouldn’t be able to afford the maintenance and every thing else — like buying the filters, and all the other stuff that goes along with it; transportation to release them,” said DeLong.

The sixth grade classes at the Gladstone Junior High School have been participating in the program for nine years.

Andy Doutree, a sixth grade teacher in Gladstone involved with the program, said the sixth grade students had received 200 salmon eggs from the DNR and 164 of those eggs survived to be released in the Escanaba River.

“It’s been a great year. They’ve watched them grow, they’ve learned about their anatomy and all their importance to our cold water fisheries here in Michigan,” he said.

According to Doutree, the Salmon in the Classroom program is important for his students because the students are the future caretakers of the Great Lakes.

“Well, really, they’re the ones that are going to be taking over all the management of our fish and all of our wildlife species,” he said.

After releasing the salmon, the Escanaba High School students went and fished at the Ford River boat launch and the Gladstone sixth graders went to the Thompson Fish Hatchery.

ESCANABA — May is skin cancer awareness month. There are simple ways to protect yourself from skin cancer, an ...

Minneapolis cop who knelt on man’s neck charged with murder