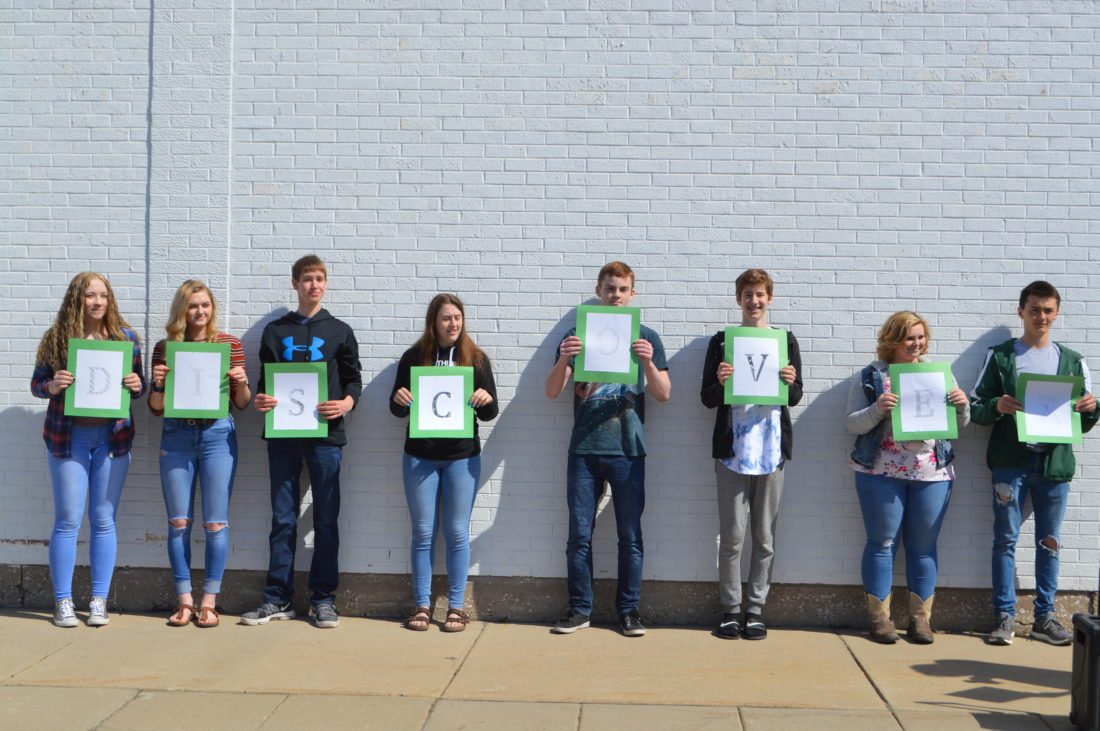 MANISTIQUE — A mural that will be painted on the Peoples Department Store building in downtown Manistique this July will be themed around the word “discover.” The mural’s theme was unveiled during a ceremony held outside the building Tuesday morning.

This mural will be part of the “Power of Words Project” (POWP), which was started by artist and former Iron Mountain resident Mia Tavonatti. Each of the murals included in the POWP are themed around a single word meant to represent the futures of the communities they are painted in, and these words are chosen by members of these communities.

“Discover” was one of 20 words nominated by community members to serve as the theme for Manistique’s POWP mural. Votes on the project were taken online and on paper ballots, and a total of almost 1,500 votes were recorded.

The POWP was started in 2012 after Tavonatti won ArtPrize (an annual art competition held in Grand Rapids, Mich.) and returned to Laguna Beach, Calif. There, she found that a public mural she had created with her students from Laguna College of Art + Design had been vandalized.

The Arts Commission in Laguna Beach directed Tavonatti to create a new mural. She decided to use this as an opportunity to launch the POWP, which she had been thinking about for some time.

The project is being sponsored locally by Lake Effect Community Arts and Schoolcraft Tourism and Commerce. A significant amount of funding for the project is being provided through CUPPAD’s Artplace grant, along with in-kind and monetary donations from local businesses, groups and people.

“We think that this is (going to) be a signature project,” Alan Barr, president/CEO of Schoolcraft Tourism and Commerce, said. He noted the POWP, combined with other public art projects his organization is looking to get grants for, could bring visitors to the area.

Tavonatti will not complete Manistique’s POWP mural alone — she will receive help in her work on the mural from at least one other professional artist, as well as four to six adult artists and four to six student artists from the community.

Project Coordinator Jeff Gurchinoff, who attended the ceremony on Tavonatti’s behalf, said the POWP’s support of area students will go beyond getting them involved with the mural’s creation.

“We do offer scholarships and grants that coincide with the project,” he said.

Manistique Mayor Mike Perilloux said he appreciated the inclusion of local students in the POWP.

“When we get the younger generation involved with community projects, it’s always a positive thing,” he said.

“They have created just enough letters to … put on display any of the nominated words,” Gurchinoff said. When the time came to unveil the mural’s theme, eight of these students were asked to stand in a specific order and hold up their letters, which spelled out the word “discover.”

Alex Lakosky, who was one of the students involved with the unveiling ceremony, said she is excited that this project will be coming to Manistique.

“It makes me really happy to see (we’re) bringing something different to the community,” she said.

Gurchinoff said he was looking forward to the start of work on this project.

“We’re (going to) have so much fun this summer,” he said.

ESCANABA — A citizen attempted to assist a Delta County Sheriff’s Department deputy after a traffic stop led to ...