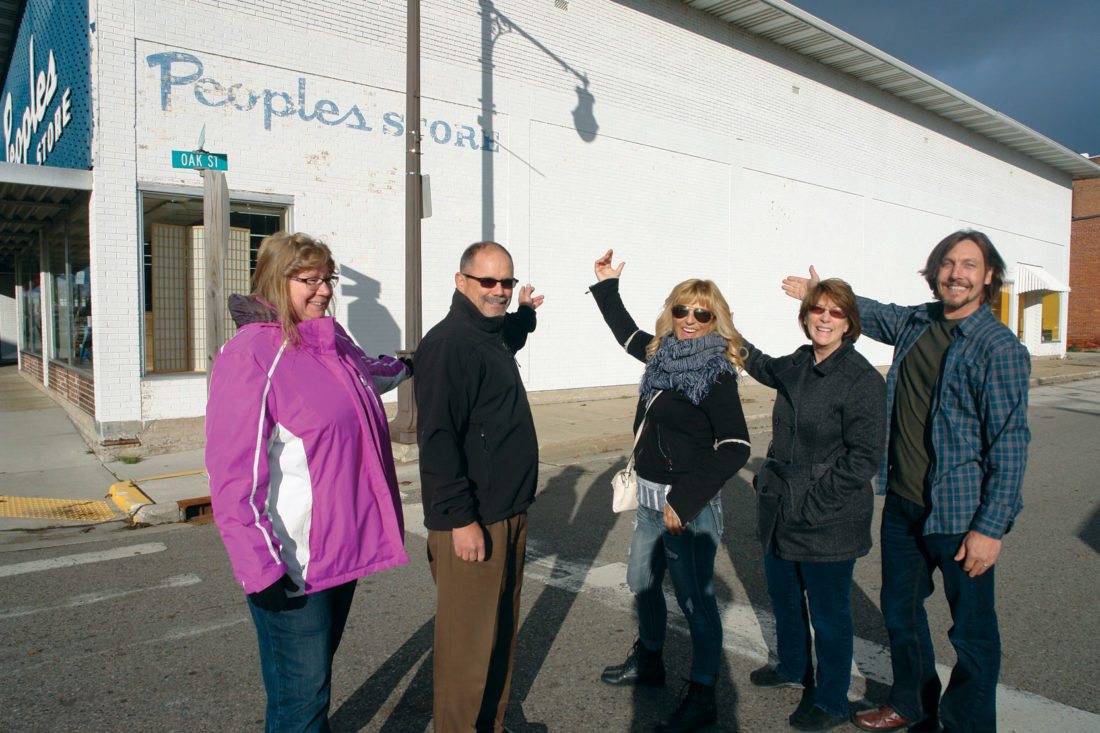 Courtesy photo A mural is planned for the People’s Department Store building in downtown Manistique this summer. Shown, from left, are building owners Lisa and Rick Demers, artist Mia Tavonatti, Lake Effects Art Director Pam Shiels, and Power of Words Project Coordinator Jeff Gurchinoff standing in front of the wall that will be painted by Tavonatti and a group of artists in July.

MANISTIQUE — A former Iron Mountain resident is leaving her mark in towns throughout the Upper Peninsula by creating murals that embody the spirit and future of those communities — using one word.

In July, Mia Tavonatti will be painting a mural on the Peoples Department Store building in downtown Manistique through her “Power of Words Project” (POWP) and in August, will be making her way to Gladstone. The Peoples building is located at 239 S. Cedar St. in Manistique. The theme of the mural will center around a single word.

“We want to respect tradition while expanding the vision with these monumental works of contemporary art which we call ‘mural mantras,'” explained Tavonatti. “I try to design works that compliment the existing, surrounding structures while also bringing it into modern times with art that will help move the citizens into the future they identified with their ONE WORD mantra.”

Tavonatti, who now lives in California, started the POWP in 2012 after winning ArtPrize, an annual art competition that takes place in Grand Rapids, Mich.

After five weeks of competition, Tavonatti returned to Laguna Beach, Calif., to find one of her public murals she had created with her students from Laguna College of Art + Design had been vandalized. The Arts Commission in Laguna Beach charged her to create a new mural. This also gave Tavonatti the chance to launch a humanitarian effort she had been thinking about for some time.

“We completed the first POWP mural in 2012 with the WONDER wall,” said Tavonatti.

Soon after, Tavonatti explained she was contacted by Jonathan Ringle, from the Iron Mountain Downtown Development Authority (IM DDA).

“He had heard that I, a hometown girl, had just won the largest art prize in the world, and wanted to see if there wasn’t something we could do to use art to help the ongoing revitalization efforts in Iron Mountain,” said Tavonatti. “I told him about the POWP that I had just created, and the rest was history.”

Tavonatti completed the first of two murals in Iron Mountain in 2013 on the west facade of the Blackstone Pizza Company building entitled “Believe.” The second was completed in 2017 called “Community,” which can be seen displayed on the west side of The Daily News building. The mural brings the portraits of 89 local community members to life, along with one child astronaut that symbolizes the future of the community.

In addition to her mural work, Tavonatti also started a non-profit foundation, the Svelata Foundation, with a large portion of her winnings from Artprize. For many years, Tavonatti said she also gave back to her hometown Alma Mater by giving graduating seniors the Ted Tavonatti Memorial Arts Scholarship, in memory of her artist father.

“The Svelata Foundation is built on the foundation that in order to build appreciation and support for the arts, it is important to educate people about the creative process,” said Tavonatti. “We show them what it takes to create, and we fan their own creative sparks by designing projects, namely the POWPs, that draw the community into our creative process.”

To help draw ideas for the murals, Tavonatti explained she studies the community where she is going to paint. Community members submit words that they think describe their communities. The top 20 words are voted on to determine which word will be used.

“Not only does this expose our process to those who may never be part of a work of art, but by having them nominate and vote on words that define their vision for the future of their communities, we are also giving them ownership and pride in the work,” said Tavonatti.

Words up for vote for the Manistique mural include “Inspire,” “Vibrant,” “Together,” “Destination,” and “Discover.” Voting is open until April 19. Residents who want to cast their vote can do so online at powerofwordsproject.org.

When looking for a place to paint a mural, Tavonatti said the artists take great consideration including looking at the physical condition and location. More importantly, Tavonatti added, the group looks for communities who have already “initiated their own revitalization and who we can partner with to build on the efforts they have already put into motion.”

POWP is expanding into a Central U.P. Arts Initiative called, “UPlift,” explained Tavonatti. Intentions for this expansion is with the hope the murals will eventually grow into a U.P. wide attraction that will boost tourism and economy.

“The U.P. needs to recreate its image to attract new people, retain its youth and inspire new markets, namely expanding its tourism base to include art enthusiasts worldwide,” said Tavonatti.

With the help from the murals created by a Upper Peninsula native, along with local artists and students, Tavonatti said being a part of this project and being able to give back to the place where she grew up has been an honor.

“I want people to see how one word can be brought to life and planted into the psyche of a community, and how it can slowly and quietly affect and inspire people,” said Tavonatti. “I want this work to be an example to local artists and students…showing them what can be achieved with a lot of hard work and community effort. I want them to tell their friends and spread the word so more people come and the economy grows.”

ESCANABA — A citizen attempted to assist a Delta County Sheriff’s Department deputy after a traffic stop led to ...